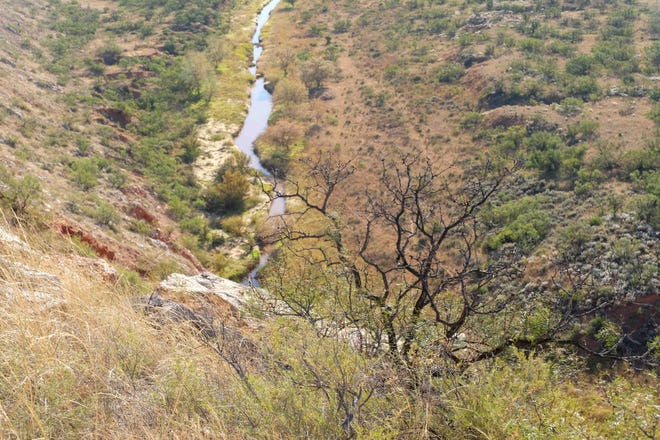 The Friends of the Cross Bar Special Recreation Management Area (SRMA) hosted their first-ever media day to outline their plans for future events, fundraising initiatives and the general outlook for the scenic area.

Located approximately 10 miles north of Amarillo, the Cross Bar SRMA is the only Bureau of Land Management area in the state of Texas. Set within a 34,000-acre conservation area on the Canadian River, the Cross Bar Cooperative Management area is a 12,000-acre prairie site previously used only as an outdoor classroom for WT students and is not open to the general public due to a lack of accessible roads . The area is surrounded by private land with no public access roads.

Although the area is only 15 minutes from downtown, limited access from private roads makes it a much longer route. Limited public groups are brought out on days known as walking days, usually Saturdays, where the public can be escorted through private land to gain access to the recreation area. Originally used as a center for helium operations, the area is now considered a tourist destination.

With the growing demand for outdoor recreational activities in the Texas Panhandle and across the country, it was determined that the SRMA should be developed for outdoor recreational applications such as mountain biking, horseback riding, hiking, bowhunting, fishing, and public-use camping. SRMA’s vision is to keep the area as close as possible to its original state, as it was before plants alien to the area invaded the area’s landscape.

The area is home to white-tailed and mule deer and a small herd of elk. Bobwhite and scaly quail are also common on this prairie. As a migratory corridor for hundreds of birds, the SRMA is also of value to bird watchers in the region.

To convert the area into a usable public recreation area, the Friends of the Cross Bar are considering federal grants for the construction of an access road off US Highway 87.

Wes Reeves, a member of the Friends of the Cross Bar Steering Committee, spoke about the proposed perspective for the SRMA. He said this area would be of great importance to the surrounding community as there would be another recreational area to get people to enjoy the outdoors and outdoor activities.

“The big effort is going to be going into the community and raising the money, $2 million to $3 million at first, just to get access to it,” Reeves said. “In the future we want to develop campsites and other facilities. Years later this will be something to look back on and be proud of. Similar to the founding of Palo Duro, we have the opportunity here to take on this legacy.”

Reeves said that one of the main issues is bringing the area back to a pristine environment where it was originally balanced with the ability to preserve the area while allowing the public access to everything it has to offer .

“A lot of people come out and say this is a beautiful piece of land; we don’t want it to be trampled on,” Reeves said. “So we are very aware of that; We have to be very careful how we deal with it.”

“The problem with so little public land in the state is that we tend to overexploit what we have, and this area will give the public another option that spans 12,000 acres,” Reeves said.

Lori Van Ongevalle, General Manager of Friends of the Cross Bar SRMA, spoke about some of the proposed recreational activities for the site.

“We will camp; We have planned about 27 campsites. We will have trails for walking, cycling and horseback riding,” said Van Ongevalle. “So it will be a multipurpose area. There’s also hunting, archery, by permit and only for people who basically come out and join nature.”

She said that once fully accessible, the SRMA would be used by about 250,000 visitors per year, according to an estimate by Texas A&M.

“The area will be really spacious with its camping areas compared to the day area,” said Van Ongevalle. “We should be able to accommodate everyone with the 30+ miles of trails we will have available.”

Jennifer Bara, a member of the Panhandle Restaurant Association, was present at the tour and spoke about the impact the recreation area could have in bringing visitors to the area. She said the goal is to raise awareness of area restaurants to encourage recreational use of the land. At her family restaurant, La Fiesta, Bara says she’s already seen the positive impact on her business from people visiting Palo Duro Canyon.

“I understand the importance of places like this and what they bring to the restaurant industry,” Bara said. “I think that will be a nice compliment for the area. Everyone needs to eat, and anything that adds quality of life to Amarillo is important to local restaurants.”

Adrian Escobar, a natural resource specialist and cross bar manager, said the process is still at an early stage with an access road being one of the top priorities to make this a true recreational area. He said each campsite would be at least 300 feet apart.

When asked when the area could be fully open to the public, he said it really depends on when funding will be obtained through grants, pending community approval of the public. He said the total expected cost of converting this area into a recreation area would be about $26 million.

The place are Petzl merchandise made? Harnesses, carabiners, helmets, headlamps…

Thousands and thousands movement into recreation, parks areas throughout area >...

Following the announcement of the challenge’s nomination as Finest New Initiative,...

How the 2022 Wildfire Season Affected Our Public Lands