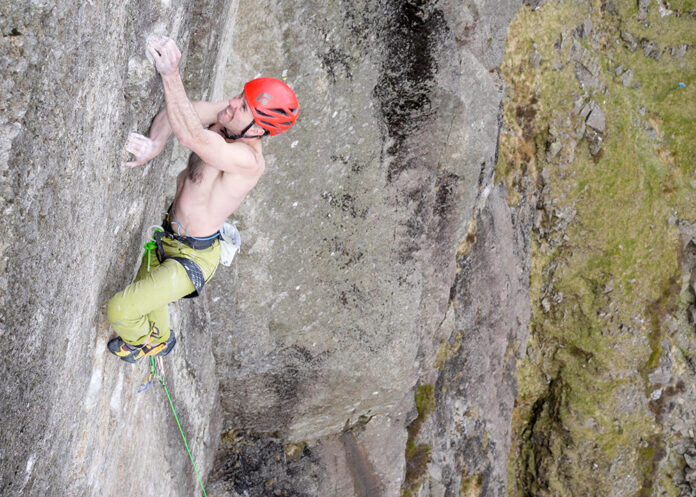 Scottish climber Dave MacLeod has made the third ascent of Lexicon, one of the most difficult trad climbs in the UK first ascended by Neil Gresham in summer 2021 at Pavey Ark in the Lake District and repeated by Steve McClure shortly afterwards.

43-year-old Scottish climber Dave MacLeod has lived up to pretty much everyone’s expectations by making the third ascent of Lexicon, the bold trad climb located up at Pavey Ark in England’s Lake District and first ascended in summer 2021 by Neil Gresham.

Conditions after Gresham’s inspiring lead were absolutely perfect and, true to form, MacLeod immediately travelled south to check it out. As he threw his abseil rope over the edge of the cliff he noticed two figures in the gully opposite, who happened to be Neil Gresham and Steve McClure; the three joined forces and after discussing tactics, MacLeod worked the line to see if it was feasible, before McClure tied into the sharp end of the rope. As is well known, the 51-year-old slipped off the crux right at the top and took a harrowing 20m fall, landing uncomfortably close to the ground. Shaken but not stirred, McClure completed unfinished business a few days later.

MacLeod returned in early October and invested two days working the moves on the upper headwall, finding his own, slightly different sequence of holds. Crucially, he noticed a slot right below the crux that would take a tiny nut and skyhook. Although of questionable quality and tiring to place, MacLeod reasoned they would offer some important psychological protection. He toproped the line clean six times before travelling back north and although he was keen to commit, the arrival of winter quashed all hopes.

He trained intensely throughout the winter months, bouldering up to 8B+ and getting fit on his board despite niggling injuries, and then made his way back to the Lakes in late March. With fingers numbed by the cold he linked the route on toprope once again and decided that the time had come. He rested for a further day and then, ignoring the sudden change in temperatures and conditions that were slightly too warm for comfort, he pulled off his impressive lead. Tiny details often make a huge difference and he strapped the nut and skyhook with velcro to his harness in order to be even quicker at placing them on the desperate crux sequence.

In his excellent, in-depth report MacLeod explained “I have not climbed all the hard trad routes in England or Wales by any means, but I have climbed quite a few and Lexicon is harder than any of them. Neil’s effort climbing the first ascent is exceptional in my opinion. There are plenty of climbers who could do the moves on it, but I suspect the number who would actually lead it is rather small, at the moment at least.”

Many of MacLeod’s more desperate creations are currently unrepeated and one stands out in particular, his terrifying Echo Wall high up on Ben Nevis. First ascended in 2008 and ungraded, this fierce line remains testament to his nigh-maniacal preparation and resolve that have enabled him to test the limits of British physical and psychological extreme for pretty much the last two decades.

Para-Athletes Use Among the Most Modern Gear We have Seen

This Energizer headlamp is a must have to your subsequent tenting...