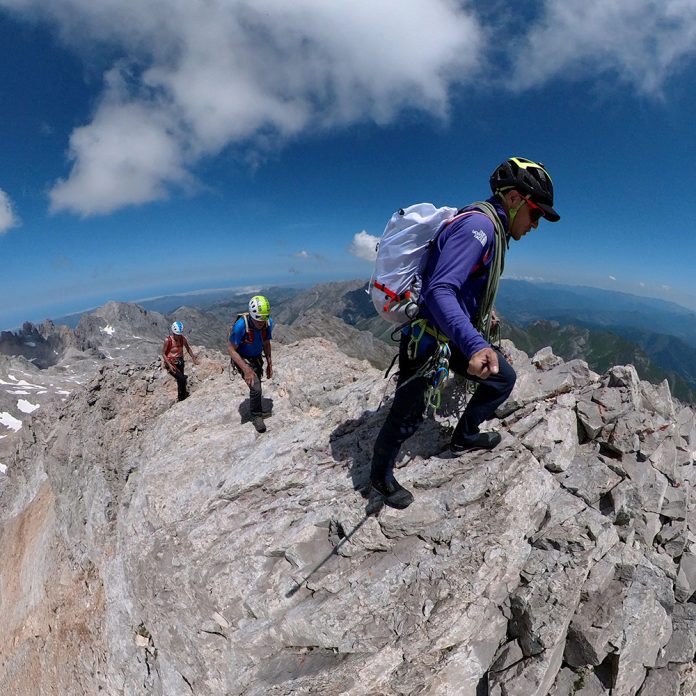 German mountain guide David Göttler recently concluded a memorable and extremely impressive outing in the Picos de Europa massif in Spain, not with a strong young client but with his 81-year-old father. The father-and-son team climbed Peña Vieja via one of the three great classics in the area, El Espolon de los Franceses, a 17-pitch limestone outing which finished on the ridge and is followed by an exposed ridgeline traverse to reach the summit proper.

The Göttlers started climbing at 7:00am and, accompanied by David’s girlfriend Monica Piris, spent the next 10.5 hours climbing the route and descending back to the car. Technical difficulties on this 1000m line check in at about V+, but as Göttler junior explains, the real difficulties were “the length of the route, in particular the long traverse to the summit. I’d climbed the route before so he knew what he was letting himself in for, but with its various exposed sections, short abseils and false summits, this proved long and gruelling. But as the saying goes, “Langsam aber sicher”, slowly but surely we made it!”

The climbers are quite rightly proud of this achievement, and Göttler told planetmountain.com that it was “touching for the roles to be reversed. It was my father who first took me into mountains many years ago and it’s nice to be able to share such a cool adventure with him even now.”

A few years ago the Göttlers climbed another absolute classic in the area, the West Face of Picu Urriellu (more commonly referred to as Naranjo De Bulnes) via the Rabadá-Navarro and in order to complete the trilogy of classics they plan on ascending Peña Santa (or Torre Sannta). “The direct south face route would be nice next year. Who knows what the future holds!”

The Trans Canada Path Connects Canadians to Nature and Every Different