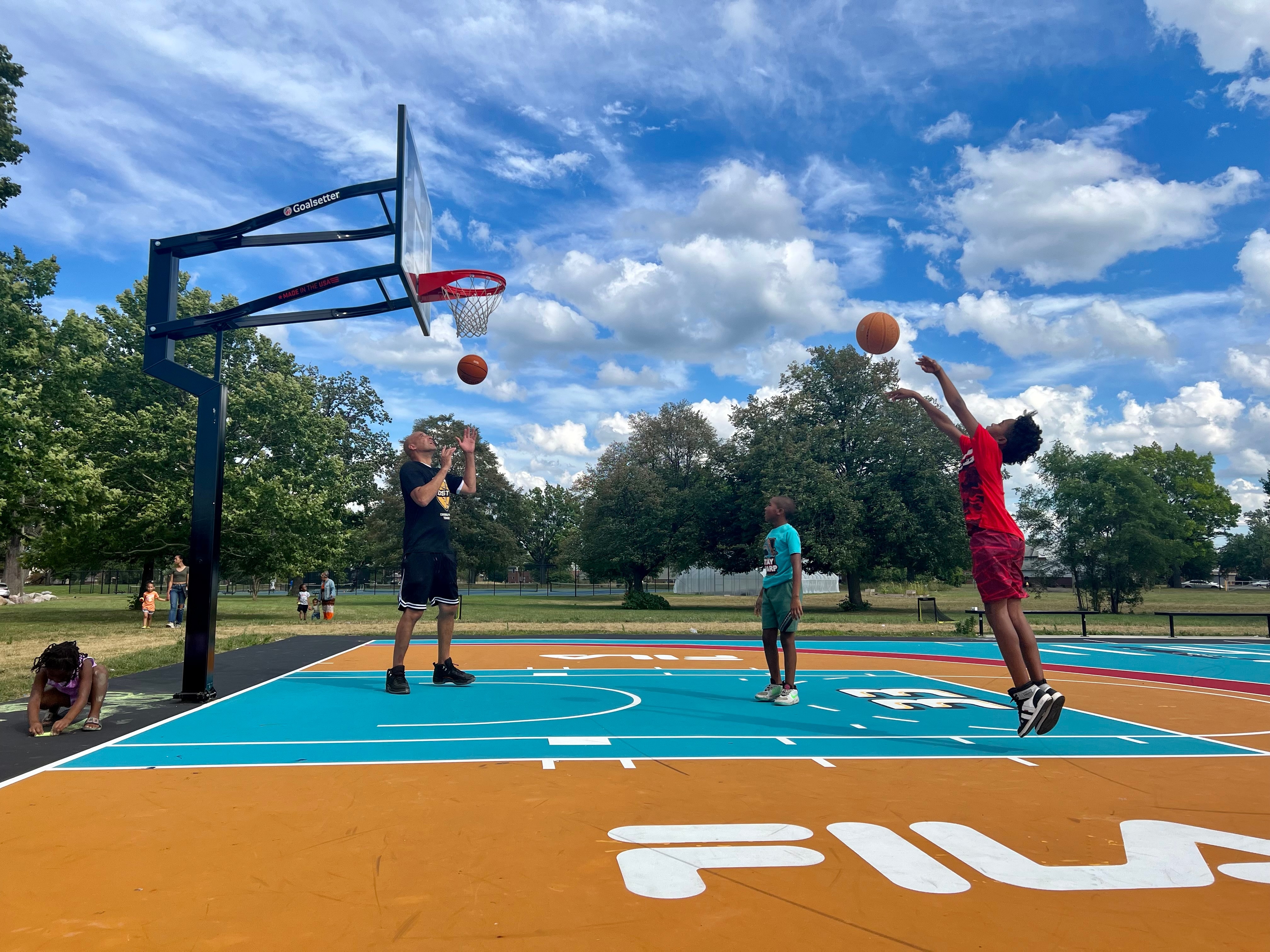 The sight brought a grin to the face of townswoman Marie Streety, who kept a close eye on her two young children and a nephew at play.

“We live less than a mile from here and it’s not usually a busy place for the kids,” she said. “Finally having a summer program out here is great and I was dying to try it.”

Streety is just one of many parents who have benefited from the weekly program, which offers a healthy and free outdoor program at Chandler, Palmer, Pingree, Rouge and Romanowski parks through September 4th. The free program runs Wednesday through Sunday, beginning at 3:00 p.m. daily. The Neighbors Program is funded by the Detroit Pistons, the William Davidson Foundation and the Ralph C. Wilson Jr. Foundation.

“When the Pistons returned downtown, we made a commitment to be impactful and fully engage with the city,” Pistons vice chairman Arn Tellem said when this year’s program was announced. “Through our partnerships, we launched the Pistons Neighbors program to activate Detroit parks, which include newly renovated basketball courts and provide free outdoor activities for families and youth to participate in and enjoy throughout the summer and into the fall be able.”

This summer, the partnership expanded to include the Detroit Parks Coalition, which is a collaboration between some of Detroit’s largest parks organizations. The Pistons have worked closely with the City of Detroit to prioritize parks and recreation centers in communities that lack outdoor centers. Weekly pantries of free produce and snack packs will be provided by the Eastern Market Farm Stand.

“I think it’s definitely appropriate for kids of all ages,” Streety said. “There’s no real age limit to having fun or getting involved in things early on. My son and daughter enjoyed just being outside and playing with other kids.”

The program is an example of the commitment the Pistons and owner Tom Gores have made to the city of Detroit, a commitment highlighted earlier this summer when Gores made a $20 million donation to build one 25,000 square foot community center and swimming area renovation in Rouge Park on the west side of town.

“We make sure there are recreational opportunities in those specific areas, and there’s just more value to the community like that,” Ricardo Marble, deputy director of Detroit Parks & Recreation, said earlier this summer. “The community has been asking for that and for (Pistons owner) Tom Gores and the Detroit Pistons to come along and offer that kind of support, it’s just a big boost to the community as a whole.”

Established in 2019, the Neighbors Program is an extension of the Pistons’ Basketball for All initiative, during which the Pistons renovated basketball courts and donated basketballs to Detroit youth. It’s part of the organization’s six-year court cleanup project with the city, which began as part of the Pistons’ move back to Detroit in 2017. The courts project will enter phase five of completion this summer, with 52 courts in 37 parks to be completed by the end of 2022.

To participate and sign up for programs and activities at any of the five parks, visit www.pistons.com/neighbors. Registration can also be done in person at each park

The 24 Finest Mountain Cities within the U.S., Ranked