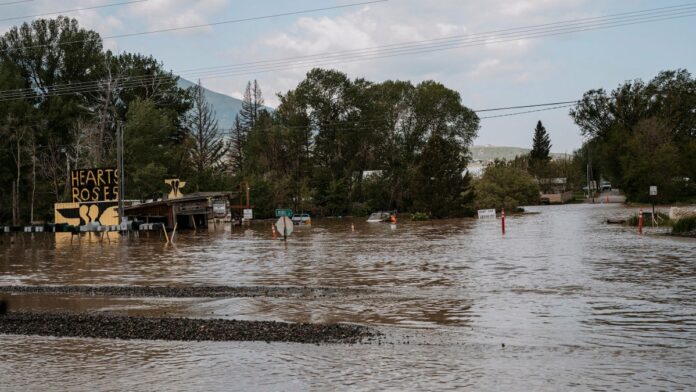 I woke up on the morning of Monday, June 13 and saw that the spring runoff was in full force on the Yellowstone River, where I work as a fly fishing guide. It had been raining for nearly three weeks straight, so a higher water level was expected. I stopped by a river access point a couple of blocks from my house in Livingston, Montana, on my way to work. The 9th Street Island side channel is typically full during springtime, and the rest of the year it is reduced to a trickle while the main channel carries drift boats and rafts through town. On Monday, the river was big, loud, and muddy. It looked angry.

When I got to work at the Yellowstone Angler fly shop, I brought up the USGS streamflow charts for rivers near Corwin Springs and Livingston. Both showed steeply rising graphs and no signs of leveling out. I saw Instagram posts from friends in Gardiner. If I thought the river at 9th Street looked angry, the water near Gardiner looked furious, and it was coming my way. Every hour, the river surpassed historic record flows. Then, the first bridge went out.

My phone started to blow up with rapid updates. The gauging stations were overwhelmed by raging water and went offline. Roads washed out, and people were stranded. Yellowstone National Park was evacuated. Another bridge was destroyed. A garage tumbled into the river, followed by a house.

When I left the fly shop on Monday at 5 P.M., there was no water in the yard, but when I came back 2.5 hours later, it was shin-deep around the building, and it sounded like a waterfall was gushing in the basement. Debris was everywhere. I went to check on the drift boats and found myself submerged up to my waist. My stepfather stayed at the shop all night, babysitting the sump pump in the basement and keeping an eye on the rising waters.

The next morning, the water level had risen again, and we had to park down the road and walk to the shop in waders. We borrowed another pump and set it up, trying hard to keep electrical wires dry and hoses kink-free. On a lunch break, I drove into the valley after Highway 89 was reopened and saw for the first time the real destruction and devastation that had hit. We got lucky at the shop.

The blacksmith’s shop across the street was nearly flooded out.

Yellowstone National Park evacuated all of its visitors and closed the entire park due to safety concerns with the flooding. The road along the Gardiner River between Gardnier, Montana, and Mammoth Hot Springs was completely under water.

The Mallard’s Rest fishing access site is home to one of the most iconic views of the Yellowstone River. The river usually flows around a horseshoe bend through the valley, but the floods transformed it into a raging rapid. The water destroyed banks and stands of trees as it rose.

All public fishing access sites and National Forest lands in the district are closed to the public until further notice.

A well-known hand-painted sign along Highway 89 stood in three feet of water, even after levels had receded by six to eight inches.

The timber yard that surrounds the fly shop has long been our barrier from the river, but it was completely flooded.

Everything sought higher ground during the flood, including this stuffed mountain goat that we inherited from a friend. Like many, we put everything we could out of reach of possible flood waters.

Owner George Anderson checks on the sump pumps in the basement of the fly shop. Nearly two feet of water accumulated there, less than many of the homes south of us, but enough to make cleaning up a large and messy task.

Provide Chains for the Outside Business Are in Shambles

The Garmin Fenix 7X Photo voltaic Is the Solely Watch I...

Fishing, recreation to return to pond at Skeels middle in Ravenna

What to do in North Staffordshire, from pottery throwing to mountaineering