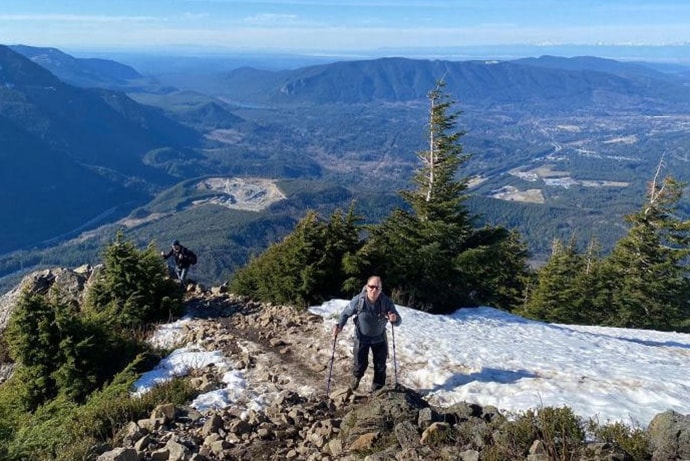 The base camps of Mount Everest, located on either side of the world’s tallest mountain, are at an altitude of around 5,000m – a wise decision as anywhere between 5,000 and 5,000m the human body enters a state of decay. Depending on which route is taken, adventurers will find themselves on the more accessible Tibetan side of the mountain or set out along the southern and much more remote Nepalese route.

Samuel Blackman, MD, PhD, who lives on Orcas Island, Washington, admittedly has “a fear of heights and a kind of fear of dying,” but he still accompanies a team of 20 other biotech experts on a trek through the Himalayas of Nepal continue the southern saddle route. The group, led by veteran mountaineer and biotech journalist Luke Timmerman, is trekking for 18 days to raise $1 million for cancer research. Each team member is tasked with raising $50,000 for the cause.

When Blackman got the call about the opportunity in October 2021, he immediately said yes. “I basically sat in front of my computer for two and a half years. I felt like I had become a super one-dimensional person,” he told Medscape Medical News. “I was running out of things to talk about that made my life outside of work interesting.”

Blackman, a self-proclaimed “long-haired slacker majoring in philosophy” who went on to become a pediatric hematologist/oncologist and later co-founded Day One Biopharmaceuticals, a company focused on developing cancer treatments for children, “felt the need to live life to the fullest to live” hit hard after this call.

“I’m 53 now,” he said. “I got through the pandemic and now we’re seeing the world go haywire in all sorts of places. The phrase ‘once in a lifetime’ means more to me now than ever.”

To prepare for the trip, Blackman, who made ends meet as a spin instructor while pursuing his PhD, has revived his peloton bike and taken advantage of the Cascade Mountain Range right on his doorstep.

“I told myself I would never be a doctor”

Blackman has always been true to the idea of ​​pursuing things that seem interesting and dropping the chips where they want. It started as a young man when he decided to study philosophy instead of following in his father’s footsteps and becoming a doctor. “I told myself I would never be a doctor,” he said. “My dad is a pediatrician and growing up I thought it was the worst job in the world because he was always so busy.”

A chance encounter with the head of bioethics at the University of Chicago, where Blackman attended. set him on a path he had dismissed in his youth. He was later accepted into the university’s MD-PhD program.

“I thought I was going to be an ICU doctor and then I did my first rotation in pediatrics and, wouldn’t you know, I absolutely and totally fell in love with her, much to my chagrin,” he said . His father, who had “completely given up” on him by that point, was of course thrilled.

“I’m the best person I can be and the best doctor I can be caring for really sick kids. It’s like flipping a switch: you don’t want to let anyone down. You want to go to the ends of the world to make these kids better off.”

Blackman stopped practicing medicine and turned to drug development while he and his wife were in the process of adopting a daughter.

“I decided to go into drug development because it allows me to do science, do medicine, and also get home at night. And that’s not to say doctors can’t come home at night, but for me, I knew if I was home and called, I would leave. That’s my instinct, that’s me. And I didn’t want to be forced into that choice.”

A journey of self-exploration

While he doesn’t claim to be a particularly religious or spiritual person, Blackman acknowledges that it’s hard to look back on his life and lump it all together as coincidence. From meeting the bioethicist at the University of Chicago by chance to his later decision to pursue drug development, everything led him to this opportunity.

“There are so many things I’m looking forward to in this experience,” he said. “Part of me just looks forward to the new; it’s a part of the world I’ve never been to. Deep down — and I’ve thought about it a lot — what I look forward to most is the sense of scale.”

For Blackman, being human involves inflated self-esteem. “Once in a while I like to be absolutely humbled by something incredibly big,” he said. “I look forward to that sense of proportion returning to my life. It makes you stop sweating the little things.”

Working in pediatric oncology had a similar effect: “When your frame of reference is children with cancer, other things, like not getting a reservation at a restaurant at the right time, seem as trivial as they actually are. I think it is.” It’s always good for us humans to be reminded that we’re not always as big or as important as we think we are.”

At press time, Blackman and the rest of the team are nearing the end of their journey through the Himalayas. Within three weeks of announcing his participation in the walk, Blackman raised nearly $70,000 for cancer research. The group will return to the US on April 8th.

Forest recreation pursuits in B.C. have been ignored for many years,...

Some excellent news to kick off the 12 months’s sporting calendar....

Making the Outdoor Inclusive for Everybody