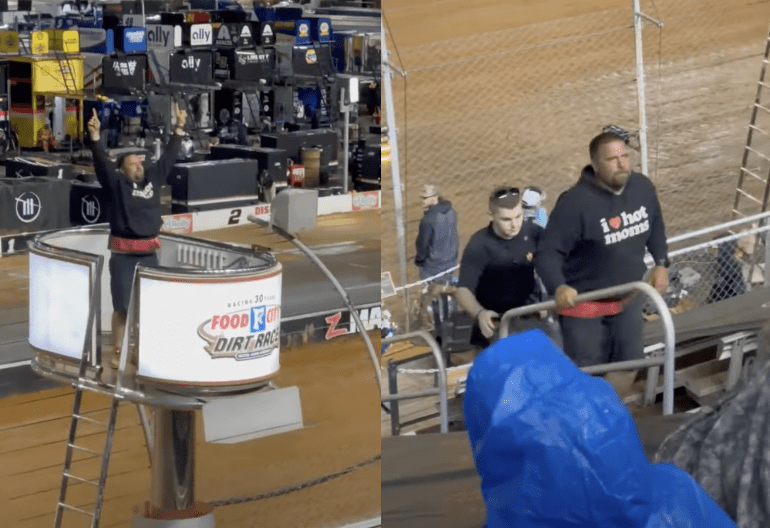 It’s no secret you’ll have a rowdy bunch ready to catch some racing – particularly at Bristol Bullring.

Seriously, a NASCAR race is an all-day affair — and often all weekend — and many people go to a three-day bend by the time the race comes around.

And when there are multiple rain delays that make the race even longer, it’s impressive that some people even make it through the race.

That may or may not be the case with this guy…

A drunk chap wearing an I Heart Hot Moms hoodie was caught on video last night during a rain delay climbing onto the flag stand at Bristol Motor Speedway, tossing up peace signs and waving imaginary flags around the Packer cars helped prepare the track after the rain blew past him on the dirt track.

Needless to say, it looks like the guy had the time of his life.

However, as might be expected, the fun stopped when he saw a police officer walking down the stands in his direction.

He quickly went from being a crazy fan to a sad puppy with his tail stuck between his legs.

Still, he managed to stay up there for quite a while.

It’s Bristol, baby, you never know what you’re gonna get.

But as for the actual race…

i wonder how Kyle Bush now feels like “falling back into a bloody win.”

The outspoken Busch managed to grab a win in the dirt race at Bristol after second placed Chase Briscoe rolled over leader Tyler Reddick on the last corner. Briscoe sent it a little too hard and slid after Reddick, sending both cars into a spin and opening the door for third-place Busch to slide past them both to take the checkered flag.

Wow. Retweet to congratulate Kyle Busch on his win in Bristol! pic.twitter.com/1P4CkhNkYR

Busch led a total of one lap throughout the race.

Busch’s 60th career win comes just weeks after him shot at Alex Bowman after Bowman beat Busch for the win in Las Vegas:

(Alex replied via Kyle hilariously trolling with “All Luck” t-shirts on his website and donating 18% of profits to charity in honor of Kyle’s #18 car).

Another one in the @BMSupdates trophy cabinet… returned to this one 😄🏁 pic.twitter.com/2A5VEMMXY

And who knows, he might have changed his mind about dirt track racing in NASCAR too. Last week Kyle said it was time for NASCAR Cut the Line at Dirt Races:

“Cut the cord… as Richard Petty said, ‘Dirt is bringing our sport back.’

And to be fair to Kyle, the race was kind of a shit show.

Sure it was entertaining.

But between NASCAR having to issue a caution because the track was too sloppy and mud pooled at the front of the cars and caused them to overheat, the lack of live pit stops almost meant that the winner was determined by scoring rules rather than position on the track and drivers complaining about everything from the windshields to the color of the track walls, it seems NASCAR has still a lot to figure out when it comes to putting on a good show on dirt.

Also Kevin Harvick had some strong words for NASCAR’s attempt at dirt racing:

“We did a terrible job grooming the track full of mud, there was nobody here to grab the track so we all look like a bunch of dorks coming into the pits because we don’t know how you prepare the track.

I had a great car, the track was ok, they just did a terrible job in the beginning… they’ve done it before but obviously it doesn’t look like it.”

There is no word yet on the Bristol Dirt Race 2023 returning.

But Kyle Busch may actually be hoping it comes back after managing to steal a win this time. (Who am I kidding, Kyle will still complain, of course).

“I feel like Dale Earnhardt Sr right now … I didn’t even do anything.” Kyle Busch responds to the boos in Bristol. pic.twitter.com/uDfJ7nCOix

Feedback searched for plan that guides Hawaii’s out of doors leisure...

I Have a Confession to Make. I Like Driving My Bike...

Not simply wheat, even world rice costs have been climbing for...

The First Rule of Chunk Membership? Discuss About It.