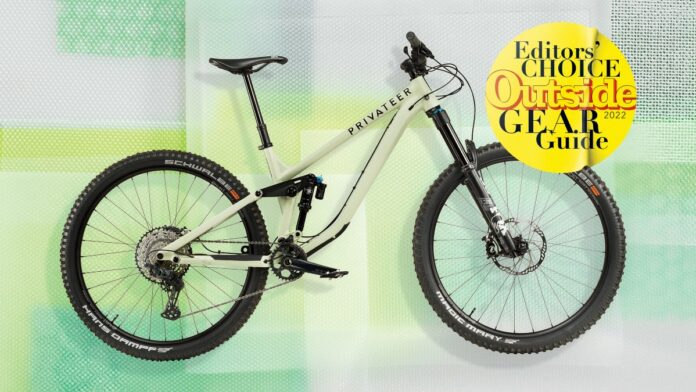 This is not the most glamorous bike released in the past year. It’s not the lightest or the sleekest. There’s no new linkage design or innovative carbon technology. In fact, there’s no carbon at all. Privateer does things differently. The rider-driven company makes no-nonsense aluminum-framed bikes that you could buy and immediately enter a race with. It’s in the name—a privateer racer is one without a sponsor. There are only two spec levels and no fancy frills—just performance where you need it. We tested the Privateer 141 ($4,379 and up), named quite plainly after its rear travel. As far as travel for trail bikes goes, 141 millimeters is somewhere mid-pack, but there’s nothing mid-pack about the rest of this bike. It’s got the head angle of an enduro bike (64.5 degrees), the wheelbase of a downhill bike (1,266 millimeters in size large), and the seat tube angle of an office chair (over 78 degrees). When we looked at these rather extreme numbers and the equally extreme silhouette, testers worried the 141 would be a hard bike to get along with. But get it on the trail, and it makes magic. It climbs comfortably and efficiently, and—if you’re used to the slackening that bike geometry has undergone in recent years—it’s not unwieldy at low speeds. But surprisingly, it’s not unwieldy at high speeds either. With moderate travel and immoderate geometry, all signs pointed toward this bike being an experts-only affair. But all testers, with varying appetites for gnar, came away satisfied. The Privateer 141 allowed each of us, at our own levels, to first get comfortable and then get rad. And though Privateer delivers this for a price that’s far from low, every tester owns a bike that costs at least twice as much, and every one wanted to take this bike home.

Out of doors recreation, a necessity for teenagers!