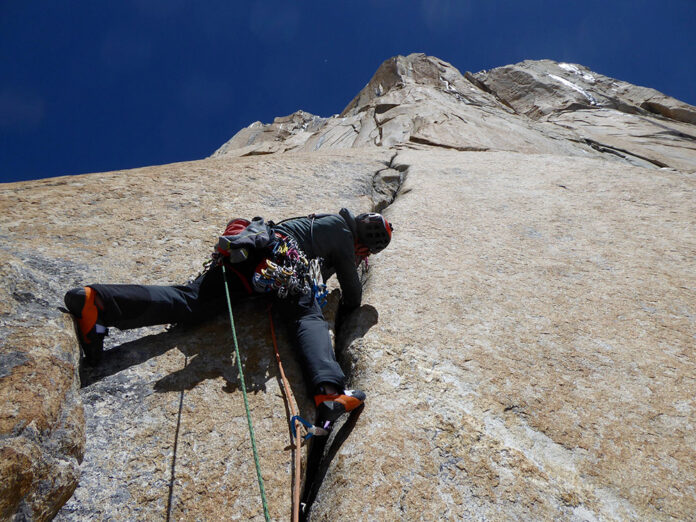 Climbing with his brother Álex and his father Francisco, Catalan climber Edu Marín has made the second free ascent of Eternal Flame on Nameless Tower (6251m) in the Trango Tower range in Pakistan. Established in 1989 by Kurt Albert, Wolfgang Güllich, Christof Stiegler and Milan Sykora, the Karakorum big wall was first climbed free by Thomas and Alexander Huber in 2009.

After coming close in summer 2021, Spanish rock climber Edu Marín has now made the second free ascent of Eternal Flame, the legendary route on Nameless Tower in Pakistan’s Trango group hailed not only as the hardest free climb at altitude, but also the best and most beautiful free climb on the globe.

The striking 650m line starts at an altitude of just above 5000m and was first ascended in summer 1989 by the Germans Kurt Albert, Wolfgang Güllich, Christof Stiegler and Milan Sykora. Braving poor weather and extreme difficulties, the first ascent lasted almost two months and success came about after an epic second summit push which saw Albert pulling out all the stops and Güllich managing to reach the 6251m snowy summit despite having broken his ankle ligaments. With difficulties estimated at VI, 7b+, A2, Eternal Flame paved the way for a new dimension of rock climbing in the Greater Ranges and soon came to represent the most coveted goal in high altitude free climbing.

The route pioneered new difficulties in Himalayan climbing and during the next decades many of the best in the world travelled to the Trango Towers to free the line; almost all efforts failed due to the prohibitive weather conditions combined with the extreme difficulties at altitude.

Significant advancements were made by Denis Burdet, Nicolas Zambetti and Toni Arbones who solved part of the puzzle in 2003 when they freed two of the four aid pitches, while Spanish brothers Iker and Eneko Pou made further headway in 2005 when they explored an 8a variation to the crux 10th pitch before retreating due to poor weather.

The first free ascent finally came about in 2009 at the hands of Thomas and Alexander Huber who, making the most of incredible weather window from 11 and 14 August, discovered a new crack system to the right of the Pou variation which enabled them to summit after having breached difficulties up to 7c+. Banking on their vast experience across some of the hardest and most beautiful mountains in the world, while talking to planetmountain.com the German brothers described the line in no uncertain terms as “the best and most beautiful free climb on the globe.”

Marín, originally a badass sport climber, set his sights on Eternal Flame in 2021 after having amassed an impressive multi-pitch curriculum across the European Alps. Although he summited the mountain last summer, his dream was thwarted by bad weather and two pitches which he had failed to climb free.

He returned this summer with his brother Álex and their father Francisco “Novato” Marín and, after reaching BC on the 6th of June, fixed ropes to the Sun Terrace before sitting out bad weather for the next 20 days.

According to information published on woguclimbing, the trio set off on 24 June, fixing ropes up to the Snow Ledge at 6000m on the 30th of June and then climbing this first section free from 1 to 4 July. With bad weather forecast, Álex and Francisco descended to BC, while Edu remained alone in his camp at circa 6000m enduring low temperatures and high winds in his bid to make a single-push free ascent.

Álex and Francisco returned via the fixed ropes on the 16th of July and the next day Edu continued his push up the imposing granite headwall. On the 19th he free climbed the 7c+ crux pitch, commenting it felt more like 8a, before summiting on the 20th and subsequently free climbing two easier pitches – a 7a and 7b – during the descent. After resting at the Snow Ledge on the 21st, the trio safely returned to BC on the 24th.

After his ascent Marin stated on his Instagram account “We sent it!!! We have done the first free climbing repetition of Eternal Flame. I have spent 28 days on the wall and I have sent it in a single push. Maybe I am the first climber who has lead all the pitches free climbing the route. I am eternally grateful to my father and my brother  Without them this dream would have not have been possible. They have fought to the end. Being the three together at the top of the Nameless Tower has been incredible  We have been able to shoot and document the entire ascent, so soon you can watch the movie. Thanks to the Montura team on the wall. It is time to go home. I am exhausted but happy Eternal Flame is the beginning of a new path for me. More info coming soon! ”

The climbers are currently on their way to Askole. While Edu’s ascent is impressive to say the least, perhaps more awe-inspiring is the fact that Francisco summited the mountain, too. Aged 70!

NAMELESS TOWER
Nameless Tower, or more simply known as Trango Tower, was first ascended in 1976 by the British climbers Joe Brown, Mo Anthoine, Martin Boysen, and Malcolm Howells after an epic unsuccessful attempt the previous year. Mo Anthoine and Martin Boysen reached the summit on 8 July while Joe Brown and Malcolm Howells summited the next day in worsening weather. The British route was graded VI, 5.10 A2, 1100m with circa 80% climbed free – at the time it involved some of the hardest rock climbing ever achieved at altitude. The Tower received its second ascent 11 years later by a Yugoslav team led by Slavko Cankar.

Local weather Change’s Impacts on Parks and Recreation – The Area