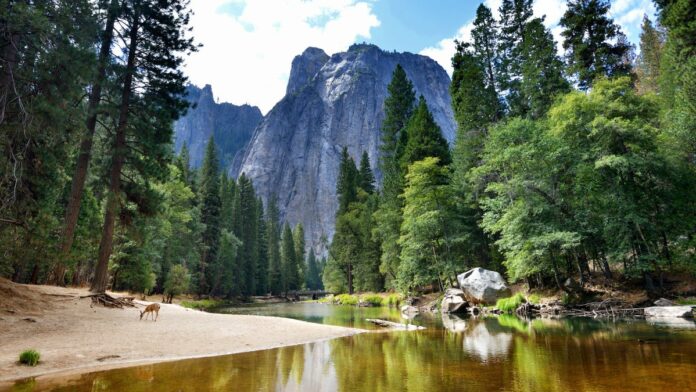 If you’ve visited a national park in the summer recently you’re probably found yourself in a frustrating gridlock that rivals an L.A. freeway at 5 P.M. And you can’t blame the bison. National parks are experiencing record numbers of visitors, and unfortunately for the environment, record numbers of vehicles. But that’s not to say you need a car to climb El Capitan, hike Angel’s Landing, or survive the hairpin turns on Glacier’s Going-to-the-Sun Road. You don’t. In fact, Yosemite, Zion, and Glacier are just a few of our country’s national parks offering public transportation to mitigate the effects of mass tourism.

Whether you’re looking to see the bottom of the Grand Canyon or the summit of Denali, here are eight epic park-and-ride national parks.

In 2000, after years of bumper-to-bumper summer traffic, the use of personal cars was banned on Zion’s main drag for the high season months of March through November. Fortunately, the park’s free shuttles service the seven majestic miles on Zion Canyon Scenic Drive between the visitor center and the Narrows. The ride, which has a guided narration you can listen to on your mobile device, takes approximately 45 minutes. Along the way shuttles stop at trailheads for the park’s iconic hikes like Angel’s Landing—one of the most dangerous hikes in the country—Canyon Junction, and the Grotto. Shuttles (which are equipped with bike racks because cyclists are always welcome) depart every few minutes and don’t require reservations.

Gone are the days when you could rock up to Glacier National Park and cruise through at your leisure. Now, you’ll need a vehicle reservation if you plan on visiting the west side of the park from May through September. But it’s a good thing—at least for the environment. Plus, there’s always the option to park and ride. With its sheer rock walls and steep drop offs, the Crown of the Continent’s unforgiving Going-to-the-Sun Road (a bucket list check for road bikers) can be quite the whiteknuckler, so it makes more sense to leave the driving to the experts during peak season. Lower your carbon footprint and take advantage of the park’s free shuttles servicing this 50-mile-long mountainous stretch of road carved into the Northern Rockies. Daily shuttles operate every 30 minutes from July, when the road usually opens, through Labor Day. There’s also a free hiker/biker-specific shuttle on the weekends in May and June.

Pro tip: For nonstop service from Apgar Village to Logan Pass and St. Mary Visitor Center to Logan Pass, hop on the 15-passenger Sprinter vans that run express. All other shuttles make stops at popular trailheads and scenic overlooks along the way.

With Amtrak trains and Greyhound buses servicing nearby Merced, you don’t even need a vehicle to visit Yosemite National Park. Once you’re in Merced, simply board a Yosemite Area Regional Transportation System (YARTS) bus headed to Yosemite Valley Visitor Center. The $22 one-way ride takes approximately two hours. In Yosemite Valley, you can connect with the free Yosemite Valleywide Shuttle that services the entire valley including stops at El Capitan Meadow—where you can camp out with a pair of binocs and watch climbers battle the world famous monolith—Lower Yosemite Fall, and Mirror Lake. Valleywide shuttles, which run every 12 to 20 minutes, operate year round while the Mariposa Grove and Tuolumne Meadows shuttles only operate during the warmer months.

Pro tip: If you’re visiting Yosemite between December and March, consider taking a detour to Badger Pass Ski Area (where you can still score a lift ticket for less than $70). Free shuttle buses to the mountain depart Yosemite Valley in the morning and return in the afternoon.

Acadia National Park’s beloved Island Explorer buses have been operating since 1999, and despite route expansions and a substantial increase in ridership (from 142,000 passengers its first season to nearly 250,000 in 2019), service is still free. Partially funded by L.L. Bean, the propane-powered buses now run on 13 routes stopping everywhere from the Bar Harbor-Hancock County Regional Airport to Hulls Cove Visitor Center (the park’s main visitor center) and area campgrounds. See a spot that looks ideal for a photo opp? If it’s a safe place to pull over, the driver will happily let you out. Buses can also be flagged down if you want to board between designated stops. Just know that on days when cruise ships are docked in Bar Harbor it’s usually standing room only.

Pro tip: Bring your better half. Acadia is one of very few dog-friendly national parks, and the Island Explorer welcomes all well-behaved, leashed dogs.

It doesn’t matter if you have a Prius or a Porsche; you won’t be able to drive past mile 15 on Denali National Park’s lone road. If you want to see North America’s tallest mountain up close, you’d better brace yourself for a bus ride. Actually, despite looking like old-school school buses, they’re quite comfortable. Choose from the tan tour buses (from $104), which include a naturalist’s guided narration, and the green transit buses (from $30), which get you from point A to point B and everywhere in between. Transit buses make far more stops along the way, and are the best options for visitors who don’t want to be limited to riding one bus. Transit bus tickets can be used on any transit bus, provided there’s room, and drivers are happy to pick up hikers along the road.

Pro tip: Pack snacks! While the tour buses usually include lunch or a snack, transit buses don’t and there is no place within the park to buy food or water once you leave the Denali Bus Depot.

Accessibility, or lack of, is the primary reason this archipelago off the coast of Santa Barbara is one of California’s least visited national parks. To travel to these five islands, often billed as America’s Galapagos, you’ll need a private boat or Island Packers tickets. Island Packers, the park’s boat concessionaire, provides year round transportation (from $63 round trip) to the main islands and seasonal (March to November) transportation to the outer islands. Once on the islands, explore by foot—the island of Santa Cruz has the most hiking options with 16 trails ranging from 0.5 miles to 18 miles—or kayak. Kayaking and snorkeling tours (from $230) with Channel Islands Adventure Company are available on the island of Santa Cruz.

Pro tip: While you can whale watch from the boat year round, visit between July and October if blue whales are on your bucket list.

If you don’t have someone with a seaplane in your rolodex, don’t worry. This lesser-known national park in the Gulf of Mexico is also reachable by boat. That said, tickets on the Yankee Freedom—the high speed catamaran ferrying visitors from Key West to the park’s main attraction, Fort Jefferson—aren’t cheap. Day tours start at $200, but they do include breakfast, lunch, snorkeling equipment, and a guided tour of Fort Jefferson. Of course, you can also reach Dry Tortugas National Park by private boat or flightseeing tour (from $371). Whatever your mode of transportation, don’t forget a bathing suit because you’ll want to get wet. Ninety-nine percent of the park is underwater, and it’s home to nearly 30 species of coral.

Pro tip:  If you plan on camping, don’t book last minute. Reservations are limited (the Yankee Freedom can only carry ten campers per day per park regulations) and sell out 9 to 12 months in advance.

It’s hard to imagine how crippling the congestion would be in Grand Canyon National Park, one of the country’s most visited, if it weren’t for the free shuttles servicing the popular South Rim. Powered by compressed natural gas, these white and green buses that all stop at the Grand Canyon Visitor Center have been in operation since the 1970s. Today, there are four routes including the Hiker’s Express, Kaibab Rim, and Village lines, that run year round (the Tusayan Route is seasonal). Service starts as early as 4 A.M. and continues past dusk, so you can definitely squeeze in a sunrise hike or sunset cycle. Traveling by bike? Shuttle buses have room for two or three bikes, so if you’re lucky, you can hitch a ride.

Pro tip: If you want to visit the more remote North Rim, make reservations (required) on the Trans Canyon Shuttle (from $120), which runs twice a day between May 15 and October 15.

Get the Zermatte Tenting Sleeping Pad for 38% Off

Utah-made app connects out of doors fanatics via 30 completely different...