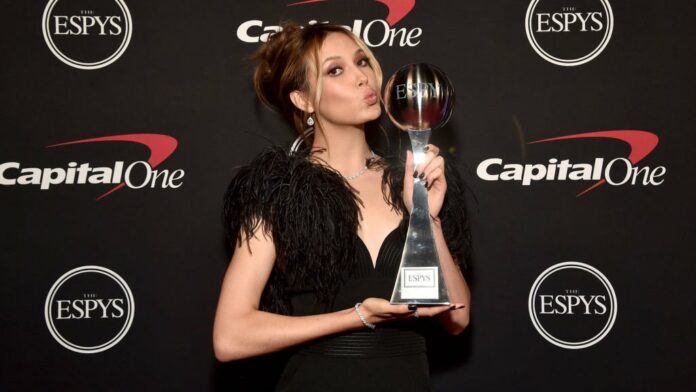 Gu, who was born in San Francisco to a Chinese mother, represented China at the 2022 Winter Olympics in Beijing rather than her native United States. She had never even attempted a 1620 when she successfully landed one in competition at the Games, winning her first of three medals for China. She won her second gold in halfpipe, and a silver medal in slopestyle.

And yet, despite her athletic achievement —which is what the ESPYs are about—people on the internet still want to be mad at her, calling her a communist and a traitor for her choice to compete for China. Gu is the youngest Olympic champion in freestyle skiing and the first freestyle skier to win three medals in a single Winter Olympics—she’s undoubtedly the best athlete in her sport. Yet Derek Hunter, a conservative radio host from Baltimore, tweeted: “Best communist sell-out to a genocidal regime for a pile of money goes to … Eileen Gu!”

Mr. Hunter, I’m curious what you think about American athletes competing for a country (and bagging endorsement deals) where there have been at least 314 mass shootings this year—that’s as of a July 5 report by the Boston Globe—and has the highest incarceration rate in the world, highest rate of illegal drug use, highest percentage of obese people, and more reported murders each year than anywhere else in the world. I think we all agree no one is holding Mikaela Shiffrin responsible for any of that.

See, the thing is, the Olympics aren’t really about national pride as much as all that opening ceremony flag-waving would have us believe. Just ask the athletes representing the Refugee Olympic Team. While the Olympic stage is meant to be apolitical, historically, it rarely is. Plenty of U.S. Olympians have used their platform to call for changes they wish to see in our country, including Gu, who often advocates for the Black Lives Matter movement and denounces anti-Asian bigotry on her social media. Whatever the cause, these athletes have earned the megaphones they use to share their message. In Gu’s case, it’s always been one of inclusion and inspiration, especially for young girls.

In her acceptance speech, Gu, who attends Stanford University, thanked “all the women” who had gone before her, pushing the sport forward. Is that not in the spirit of the Olympic motto, Citius, Altius, Fortius—Faster, Higher, Stronger? To that I say: let the people go skiing.

Tagert Mueller Ready to Plunge Off a 65-Foot Waterfall. Then Got...

State unveils app for out of doors recreation, searching in Hawaii

Main proposals for future outside recreation in Clooney space of Derry...