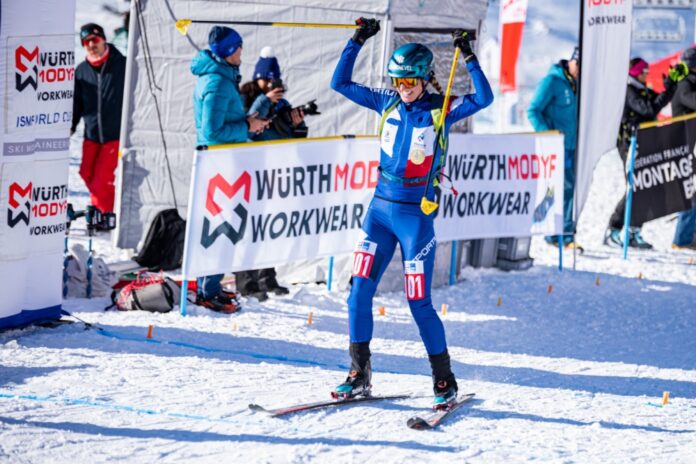 The first stage of the WÜRTH MODYF ISMF World Cup 2022/23 took place today in Val Thorens and commenced with the Sprint race. The fast track always promises an exciting spectacle, and today’s race was no exception.

“It’s a great feeling to win in this weather. And winning in front of the three other Swiss guys is just incredible. The track was fair, you could overtake on the whole course, so I think it was a perfect sprint. The start in the finals was very hard, young compatriots went fast, and I tried to stay with them. I am happy to start with a win,” said Lietha after the race.

The Swiss athletes finished in the first four places as Iwan Arnold, Thomas Bussard and Matteo Favre crossed the line behind Lietha. For the third Bussard, it was a very successful debut in the elite category. Throughout the day, he was fast and looked confident. Robin Galindo and Thibault Anselmet (both from France) came fifth and sixth, respectively.

The women’s race saw a dominant run to the finals by the biggest favourites of the day. Emily Harrop, Marianna Jagerčíková and Marianne Fatton made it to the top six without any troubles.

Jagerčíková of Slovakia also made a great start in the final. However, she lost a ski on the foot part, which cost her the fight for triumph. This left Harrop alone in the lead, who managed to hold on to a decent gap till the finish.

Harrop was all smiles at the finish line, enjoying another World Cup triumph, her fifth in the last year: “It’s cool and nice to have one in Flaine (France) and now in Val Thorens. Family and friends were around. It always puts you in confidence for the next races as you are never sure what the form is going to be at the beginning of the season, especially this early.”

Marianne Fatton is making her comeback after a year-long break. She finished second in the first and made it clear that she is a force to be reckoned with this season. Italian athlete Giulia Murada started the World Cup campaign the same way as last year – with a third place in the sprint.

Reno Is Your Spring and Summer season Gateway to the Sierra

Out of doors retailers and locals gearing up for an additional...

Water Disinfection within the Mountains. How to make sure the water...