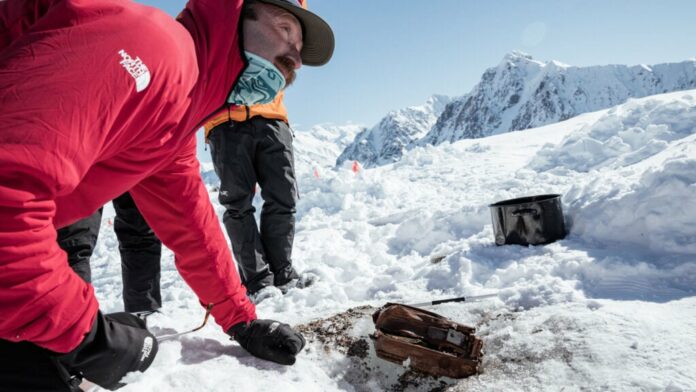 Professional big-mountain skier Griffin Post has an affinity for books about outdoor adventurers from bygone eras. A few years ago, Post began reading about Bradford Washburn, one of the pioneers of American alpine climbing, who completed more than a dozen first ascents in Alaska and Canada in the 1930s through the 1950s. Washburn later became a respected aerial photographer and cartographer, and he also founded the Boston Museum of Science. He died in 2007 at age 96.

“His seemed like a life well lived,” Post, 39, told Outside. “A lot of these mountaineers can come off as one-dimensional, and he was the multi-faceted guy. He seemed to have this non-stop curiosity and this sense of exploration that went on for years. He wanted to get the most out of life.”

A former U.S. national champion freeskier and regular on the Freeride World Tour, Post is now a regular in adventure ski videos, and earlier this year he starred in HBO’s Edge of the Earth series, which was produced by Teton Gravity Research. Two years ago, he read David Roberts’s 2007 survival tale about Washburn titled, Escape from Lucania: An Epic Story of Survival. The book recounts Washburn and Bob Bates’ ill-fated 1937 expedition to ascend Canada’s 17,192-foot Mount Lucania, which at the time was the highest unclimbed peak in North America. The duo faced a litany of setbacks on the voyage, and they had to abandon most of their gear along the way. They ultimately ascended the mountain and then climbed the nearby 16,644-foot Mount Steele before walking out of the wilderness with almost no remaining food or equipment.

Post was drawn in by the book, and he focused on one specific element of the story. Washburn and Yates left behind 1,000 pounds worth of camera gear, surveying equipment and supplies on the Walsh Glacier at the base of Mount Lucania, which was lost to history and never recovered. The gear was likely still out there, buried in the ice, 85 years after it had been left behind.

Washburn and Bates headed into the Saint Elias Range in June 1937 aboard a small plane flown from Valdez, Alaska. The plane had already made three runs to and from their landing spot on the glacier to deposit the hundreds of pounds of gear they would need to survive and document the arduous ascent. Their mission went askew from the start, when their transport airplane touched down amid a rainstorm on the melting glacier. Unseasonably high temperatures and unstable snowpack trapped the plane in slush. They dug for five days and eventually freed the craft, but the plane was only able to take off with the pilot aboard, and a return mission was not possible (the ordeal was even caught on film).

Descending the glacier to the west seemed too dangerous, so Washburn and Bates made a tough decision. They stowed the bare essentials into their packs and set off to climb the peak and then traverse to safety via a series of peaks and passes to the east. That decision led to their leaving the gear cache—with most of their tents and survival gear—back at the glacier.

When Post read about the abandoned gear in Escape from Lucania, his eyes widened. “There are these two sentences in the book about how heartbroken Washburn was to leave his Fairchild F-8 camera behind, and that just stuck with me,” Post says. “I just thought that the stuff still has to be there.”

Those two sentences piqued Post’s curiosity, leading to hours of internet sleuthing, calls to climate scientists and historians across North America, and eventually an expedition of his own, which was backed by TGR for a forthcoming documentary film that has yet to be named.

Throughout the spring and summer of 2021, Post pored over photographs of the cache site that had survived Washburn’s expedition, to try and get a sense of the original location of the camp. He was aided by archivists at Boston University and the University of Alaska, Fairbanks, which both have photos, hand-drawn maps, and journals from Washburn’s various expeditions, and agreed to share the documents with him. Post also spoke to glaciologist Luke Copeland at the University of Ottawa to get a sense of how the moving ice may have impacted the site.

“[Copeland] sent me a map of where it could be—that became my treasure map,” Post says. “Having the map made it feel really real. I set it as the background of my phone so it would be a constant reminder.”

In early 2022 Post built a slide deck around the film idea and presented it to producers at TGR. Why not send himself and other big-mountain skiers to skin into the site, tackle first descents on some of the lesser peaks near Mount Lucania, and then spend time trying to find the leftover gear?

Drew Holt, an executive producer with TGR, met with Post to discuss the story. TGR had already finalized its concept for an annual ski and snowboard film, but the company was weighing ideas for a documentary-style film to pursue. Post’s pitch had multiple components for a successful adventure film, and none more important than the legend of Washburn, and the opportunity to unearth relics from the past.

In late April, Post led a three-week expedition onto the glacier with pro snowboarders Jeremy Jones and Robin Van Gyn. The group encountered heavy snowfall, and they spent eleven days hiking and descending peaks in the area. Post knew that the deep snow would lessen their chances of locating the gear. Still, near the end of the trip, the group traversed more than 70 miles on foot to and from the spot on Post’s map to see if they could dig up the gear. After more than a day of searching, the group gave up.

“Even though the skiing was good, the goal was to find the cache, and I was pretty heartbroken,” Post says. “There was a moment when everybody had started to head back and it was just me and Robin, and eventually she told me it was time to go. She gave me a big hug. I knew it was a long shot to find it at that time of year.”

Post returned home to Jackson, Wyoming, but he didn’t abandon the idea to locate the gear. He worked with Copeland to construct a different model that suggested a new spot for the cache. TGR agreed to fund another trip to the site in late August, but this time, it was a smaller affair. Jones and Van Gyn stayed at home, and instead Post flew back alongside a small filming crew and one of Copeland’s Ph.D students, named Dorata “Dora’ Medrzycka. “It was all about searching this time,” Post says. “We didn’t even bring skis.”

By August, the snow level was much lower, and the glacier was pockmarked by crevasses. The crew spent six days searching a vast area, but again, they turned up no sign of the cache. With just one day remaining before the air transport left, Medrzycka approached Post with a plan. According to her own calculations of the glacier’s speed, she believed the site was anywhere from three to four miles further down the valley. The next morning, Post and two others walked to the site she pinpointed and began digging. After an hour, one crew member unearthed a crushed metal fuel can. Then, someone found a pair of goggles—unmistakable relics from a bygone era of adventure.

“I gave the cameraman a big hug—I was on the verge of tears,” Post says.

The glacier had pushed the cache much further than scientists had predicted—it was approximately 14 miles away from the spot where Washburn and Bates had left it. The gear they located was actually part of a smaller gear cache for Washburn and Bates. Post and his crew radioed a helicopter, and after flying around the area they located the main collection of gear.

“It was half buried, and if you didn’t know what you were looking for, you would have missed it because it blended into the landscape,” Post says. “But if you looked closely it was like ‘Oh, that’s a ski pole, that’s an ice axe.’ It was all there.”

The crew mapped and logged some items, and then departed for home. A month later, Post returned, this time with officials from Canada’s National Parks service and a team of archaeologists. They dug through the ice and found three cameras—including Washburn’s beloved Fairchild F-8—plus boxes of film, hiking poles, tents, and other survival gear. The crews retrieved the cameras and film back to a lab in Ottawa, where developers are hoping to salvage any images that Washburn may have taken before departing. Other gear was collected and cleaned.

Post says the expedition succeeded on multiple fronts. The discovery of the cache showed researchers just how far the glacier had moved in 85 years, and could help future glacial models predict movement since much of the current science around prediction is based on GPS data from the past few decades. The salvaged items are likely to end up at museums in Boston and Canada to help memorialize the expedition. And the forthcoming film could help future generations learn about Bradford Washburn, and the impact he had on the modern culture of adventure.

Plus, Post followed his desire to locate items that were lost, and presumed to be unfindable.

“Through all of these highs and lows and doubts, there felt like so many reasons why this stuff wasn’t going to be there,” he says. “ The feeling of validation was indescribable.”

As soon as an Elite Rower, Brennan Wertz Is Now Taking...

Take into consideration the worth of the outside when voting