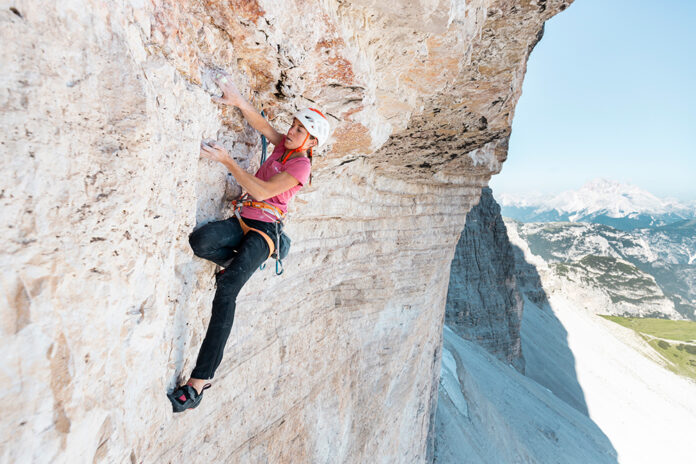 Federica Mingolla reports about her Thursday 16 June ascent, belayed by Niccolò Bartoli, of Bellavista on Cima Ovest di Lavaredo (Dolomites), first ascended by Alexander Huber in 1999. Mingolla and Bartoli descended from where the route joins the classic Cassin due to poor conditions

Federica Mingolla has started her summer season up in the mountains in style with an on-sight of La cruna dell’ago (8a) in silent Vallone di Forzo in the Gran Paradiso National Park, a repeat of Golden Tower (8a) on the bullet-proof limestone of France’s Tours d’Areu, a redpoint of the famous roof crack Ma Dalton (7b/c) in the Mont Blanc massif and, last Thursday, an ascent of Bellavista on the north of Cima Ovest di Lavaredo in the Dolomites.

Established by Alexander Huber rope-solo over a period of four days in winter 1999, the route was freed by the German climber in 2001 with max difficulties in the region of 8b+/c. The route immediately became a coveted test for many of the best; the first female ascent dates back to 2013 and was carried out by Sasha DiGiulian, while two years later Barbara Zangerl checked in with the second female ascent.

Mingolla tried the route for two days last year before an accident dashed all hopes. Last Thursday, after just one more day on the wall, she managed to climb all the difficult pitches free. It’s worth highlighting that the 27-year-old aspirant mountain guide and her climbing partner Niccolò Bartoli descended after the difficulties, ie where the route joins the historic Via Cassin, since this was soaked after the previous night’s violent thunder storm.

In some ways the icing on the cake, the summit, is missing, as Mingolla herself readily admits in her report published below. But as she explained to planetmountain.com “I didn’t think twice. I would have really liked to continue to the top, but rather than die we retreated…”

Bellavista is a multi-pitch route that tackles the obvious overhang that characterises the north face of Cima Ovest di Lavaredo in the Italian Dolomites. It’s hugely impressive, even for those who have plenty of multipitch experience,, and when you see the the traverse that crosses the overhang for the first time, it leaves you speechless. It makes you feel small and powerless. It scares you.

Just think: if you fall on the traverse you drop 5 or 6 meters into space, and there’s no possibility of getting back onto the rock, all you can do is jumar back up the ropes to reach the last peg. In short, the first time I tried to traverse across the large 8c roof I felt like when I climbed my first multiptich: I was terrified!

At the end of August 2021 I had decided to try this Alex Huber masterpiece, established solo by the German in 1999, what a beast! After two days I freed all pitches except the 8c and 8a and I felt good, knowing that I’d be able to send it given the chance. Unfortunately however, my commitments at the time meant I had to abandon the project and only a few days later I broke both heels. My static rope remained hanging from the roof all winter.

Finally last week I found the time to return to the Lavaredo peaks, and I also found just the right climbing partner, Nicolò Bartoli. To tell the truth I felt quite tired, because I’d just spent 10 days bolting, cleaning and climbing in the Kosovo, but the temperatures and the breeze convinced me that this was a perfect time to give it a try.

On Wednesday 15 June I was back below the big roof after having climbed all 5 previous pitches. This time I was less afraid. I started climbing and after 2 attempts I managed to get past the hardest sequence of moves, but shortly afterwards my elbows bent outwards and I fell. Then it started to thunder and we retreated. That night it rained a lot.

On Thursday I got up and feel whacked, I hurled down some sport supplements and some vitamins, hoping that the placebo effect would help me as much as possible. When I reached the large overhang I am was disconnected mentally. While climbing the first 7b pitch I’d had a bad premonition, like a flashback: I saw myself in a wheelchair. The 7b pitch is very poorly protected and that was probably what scared me. In any case, I was at the belay, gearing up for the 8c, but my mind was elsewhere, as if it didn’t matter what I was doing. Nik had supported me right from the first hold. It’s important to climb with someone who transmits good vibes and, for me, 50% of the success of this adventure is thanks to him.

This time I passed the crux in the roof and suddenly realised that, instead of bloating up like a turkey while resting, I could actually get some decent rests. After fighting for 1 hour I reached the belay and, for the first time in my life i reckon, I screamed out loud. So loud in fact that I got an applause from the hut below. I was happy, but it wasn’t over yet!

Nik quickly reached me by jumping up the static rope and we pushed on with only the necessary gear and a light rucksack. I climbed the 8a at breakneck speed, as if I’d done it at least 100 times in the past. The pitches afterwards are easier but need a bit of route finding, and overall the rock quality isn’t too bad, like on the pitches below the roof.

When we reached the black streaks on Via Cassin that mark the end of our route, we realise that it was streaming with water, probably due to the violent storms. Climbing upwards would have been impossible, or at least totally crazy. We therefore decided that we’d completed the route and that saving our skin was more important than reaching the summit of Cima Ovest. Somehow we descended and, not without difficulty, we returned to the base.

I think my ascent couldn’t have got any better than that, given how it all started, and I still don’t understand how I managed to send the 8c pitch so quickly. I am simply happy. I’m sorry about not tagging the summit, which is a joy to touch after a great climb up a wall like this one, but after what I’ve been through I think risking my life for a few grade V pitches simply isn’t worth it.

Maybe one day I’ll come back to try Panaroma, another Alexander Huber route on Cima Ovest that’s always caught my imagination, but for now it’s time to prepare for the upcoming trip with legendary Nicolò Bartoli. Kyrgyzstan here we come!

Is tenting actually tenting with no little ache and peril? |...

Our view: Don’t mess with this vital outside funding mechanism –...

The Finest Methods To Move The Time Tenting When It Rains