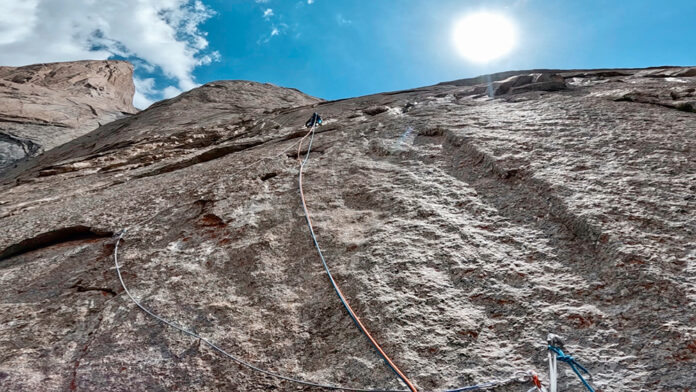 In the Ak-Su Valley in the Pamir Alay in Kyrgyzstan, Italian alpinists Federica Mingolla and Niccolò Bartoli have made the first ascent of Vivere la vita, an 800m big wall with difficulties up to on the South Buttress of Pik Slesova, also referred to as Peak 3850m.

Federica Mingolla is without a shadow of doubt one of the most talented, most versatile alpinists of her generation. Making a full list of all her climbs is practically impossible but there are some standout climbs in her vertical repertoire, such as when she became the first woman to lead the entire Fish route on Marmolada in the Dolomites, such as her first ascent of L’isola che non c’e in the Mont Blanc massif, the first ascent of a big wall climb on Nalumasortoq in Greenland, and the first repeat of Incroyable on the Red Pillar of Brouillard in the Mont Blanc massif (the day after repeating the historic Ratti – Vitali on Aiguille Noire de Peuterey…). After an abrupt halt last autumn due to a climbing injury, Mingolla bounced back more motivated than ever before and redpointed routes up to 8c/+. Now the Italian has added another interesting chapter by establishing a long, beautiful new climb on the south buttress of peak Slesova in the remote Ak-Su Valley in the Pamir Alay in Kyrgyzstan. The 27-year-old mountain guide established the big wall with an outstanding climbing partner, Italy’s Niccolò Bartoli, an expert on the smooth slabs of the Val di Mello, with whom she ticked Bellavista at the Tre Cime di Lavaredo shortly before setting to. Here is the story of the first ascent of Vivere la Vita, Living Life (800m, 7b max), sent to planetmountain.com directly from the bustling city of Osh.

WELCOME TO KYRGYZSTAN
Do you speak Russian? This is the first question that locals ask you when you arrive in this country. No one had ever asked me this before. And no, sorry, I don’t speak Russian and neither does Nic! The problem is that their English is not even elementary school level, so we always ended up gesticulating, which remains the world’s most universal language.

In addition to difficulties in getting ourselves understood, another crucial factor that caused us problems was the food. Between one stomach ache and some throwing up, in the end we also managed to drag ourselves onto the wall and I have to admit that in the end the result of 6 long first ascent days (especially the last one) turned out to be a complete surprise: a wall directly above base camp, with no routes at all and on beautiful granite. How come? The slabs had probably put most climbers off as in all likelihood they’d travelled here without the right number of bolts.

The face is called The Wall of Dykes, or the South Buttress of Peak Slesova or even Peak 3850. Regardless, it’s 800 meters in height and it has an unclimbed west face that left us speechless due to the quality of its rock and the logical line that allowed us to climb it. The slabs provide mainly friction climbing, right up Nic’s street, but most of the pitches need protecting with cams. Slabs protected with trad gear, how cool is that!

We’d come here with 100 8mm, including belay chains with abseil rings, and we’d reckoned we’d have way more than we need but in the end they were just enough to finish the job: who ever expected to stumble across an 800m route?!? Making the first ascent on this face wasn’t easy, shade up to mid-day, the base of the route at about 3000 meters above sea level, and only 200m of static rope certainly didn’t help matters. Climbing the pitches we’d established the previous day in order to reach our highpoint, with the ensuing loss of energy and time, really wasn’t the quickest tactic, but hauling a portaledge up the slabs didn’t seem like a particularly easy solution either.

Furthermore, when we were just 4 pitches from the top Nic began to feel poorly, so unwell in fact that he said he couldn’t even move his hands. We really don’t know what strange evil befell our base camp, but the fact of the matter is that every day someone got sick, while someone else got better. The real problem was that while the symptoms normally, as in my case, lasted a maximum of 2 days, in Nic’s case they continued for almost a week. Good weather spells and rest days don’t go hand in hand and one morning, with clear skies and mild temperatures (a rare occurrence for this area) I decided to take advantage of the weather window and complete the route on my own.

At breakfast I talked about it with a Basque friend I’d met at base camp, and he started looking at me as if I were crazy. Less than 10 minutes after our conversation Jon Segurola returned to my tent with a stash of gear in his hand and huge smile on his face. I immediately realised that my adventure was not going to continue on my own and I have to admit that I felt a little relieved. I’ve always rejected the idea of going “solo”, and I’ve only ever gone on my own in some rare cases, out of extreme necessity.

So I was going to be joined by Jon! Our adventure began that morning at 7:15 am, with a few complicit glances and even fewer words, because Jon doesn’t speak much English and my Spanish is terrible. That’s why the most repeated phrase was probably “io non intiendo nada!” But things turned out fine! And there’s no need to talk much when you already fully understand each other with just a quick glance. Me as leader, followed by Jon, two backpacks with the bare essentials for a long day out, the drill and the last reaming bolts left to finish off the route. Off we went!

I never expected the first integral ascent of the route to turn out as it did, with me as the leader, climbing free and bolting the last pitches with difficulties up to 6c and with a partner who I didn’t know but who turned out to be a true gladiator! No siesta! 20 pitches, in the blink of an eye, knowing exactly where to go and how to climb them, with super motivated Jon seconding like Speedy Gonzales.

I finished placing the last belay at 8:30 pm on the top of Peak 3850, the summit, shouting something incomprehensible into the sky that at this point was beginning to get dark. It was one of the sunsets that I will never forget, there I was with the drill in hand, my hands sweaty and dirty hands after a long day out in the mountains, my arms tired, and Jon’s smile that gave me strength. It was all just perfect. Even our return to base camp at around midnight was ideal: Nic and Jon waiting for us in front of a fire with some scrambled eggs and a little bit of rice, happy to see us and we happy to see them. And hungry.

We have called our route Vivere la Vita, Living Life, after the song by Mannarino, because those who know the lyrics can also understand the deeper meaning of this adventure, will know something about the route and even a little bit about us. The route isn’t extreme, in fact the difficulties are usually in the region of 6c, with some pitches graded 7a and a 7b, but despite the number of bolts the route needs integrating with trad gear (2 full racks + micros) that isn’t always easy to place. And of course it’s long. Climbing it in a single day is top notch!

The belays are equipped with 8mm bolts with abseil rings and, above all, the rappels are straight. The only flaw, if we want to call it like this, is that the ropes have to be at least 70m long. In any case, I reckon that currently it’s the best equipped route in the area when it comes to quality of the in-situ gear and wear and tear, due to the fact that it’s completely new and that we decided not to be stingy with the bolts at the belays.

After this first ascent, Kyrgyzstan gifted us with some more beautiful days of perfect weather during which we climbed some other lines in the Ak-Su valley. Nic by now had fully recovered, and we were joined by another Spaniard called Mandi. In particular I’d like to mention the historic and beautiful Perestroika Crack, 800 meters of cracks and corners all the way to the summit of Peak Slesova 4240m. After a bivouac at the base of the route, our fast & light ascent in a single day was the icing on the cake of this wonderful experience in Kyrgyzstan with two amazing climbing partners.

For those wishing to consider a climbing trip here, I recommend not to expect terrain like we have it in the Alps, with perfect topos, solid rock as a result of the many repeats, and good in-situ gear. Kyrgyzstan still isn’t a particularly popular climbing destination and although things are slowly changing, the routes still only get a handful of repeats each year. In my opinion, it’s best to come here after you’ve gained plenty of experience on fairly wild terrain, and come here with a mountaineering, as opposed to sport climbing, spirit. In order to limit or, better still, completely avoid nasty surprises!

Can You Choose Up Huge-Wave Browsing in Center Age?

Soudain Seul, the trailer of Simon Lorenzi’s boulder at Fontainebleau

V2L Tech Proving That It Is No Longer Simply A Good...