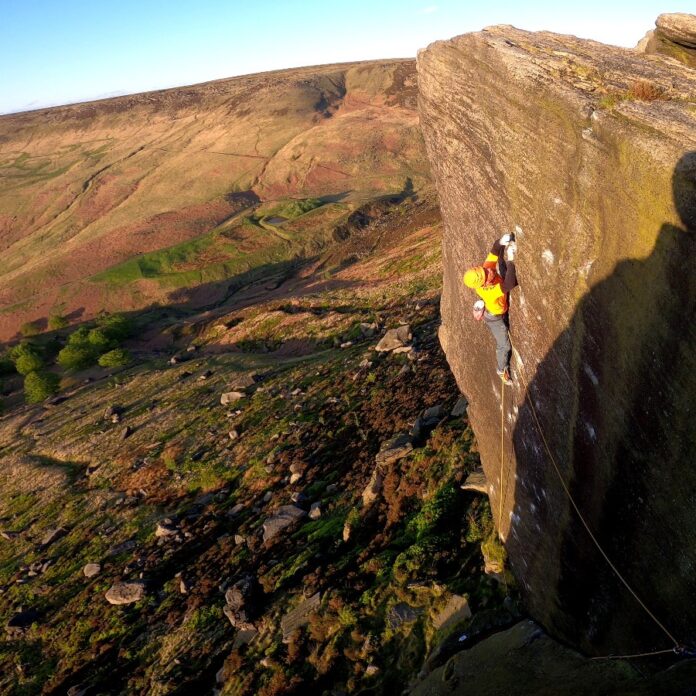 Polish rock climber Filip Babicz has repeated Appointment with Death, the E9 6c gritstone climb at Wimberry Rocks in England. Babicz made the fifth ascent without crashpad and rope-solo.

During an intense three-minute spell shortly before eight last Wednesday evening, Filip Babicz completed an ascent on Britain’s gritstone outcrops that is destined to leave its mark: Appointment with Death at Wimberry Rocks, without a crashpad, completely on his own and rope-solo. The route in question climbs an exposed slab first ascended by Sam Whittaker in 2003 past thin moves on precarious pebbles, and the line is completely unprotected apart from a cam in the crack far to the right. For this reason this rendezvous is earmarked as of the most dangerous routes on grit.

Babicz chose to climb without a crashpad at the base of the route as is now customary and, even more remarkably, he climbed without a belayer; instead of a climbing partner he self-belayed using a Grigri. The crag is located at the top of a gusty valley and although it hosts numerous quality climbs is never particularly popular – during the 5 days spent working the line, Babicz encountered no other climbers. It goes without saying that a fall, up there on his own, would have had serious consequences.

Originally from Poland but resident in Italy, Filip Babicz is no stranger to headline-making climbs. Last year he whisked up the North Ridge of Pizzo Badile in just 43 minutes, while in 2020 he soloed the Integralissima de Peuterey in the Mont Blanc massif in an astounding 17 hours. A few weeks later he surpassed himself by climbing Aiguille Noire de Peuterey in just 1 hour 30 minutes. At first glance, the common denominator for all these ascents is breakneck speed, but on closer inspection the most important factor is not the element time, but Babicz’s mental ability to push himself to the limit. Precisely like on Appointment with Death.

In order to comprehend how dangerous this route really is, at the end of the interview with the 39-year-old there are two videos. The first features Tom Randall making the second ascent in 2013, while the second video captures Jim Pope and that heart-stopping moment when a foothold snaps close to the top.

Appointment with Death, why on earth this route Filip?
I’ve known about it for many years, it’s a symbol. AWD represents something extreme, unattainable (for me), requiring nerves of steel. In 2010 I started to toy with risk and learn more about it. I started doing increasingly dangerous things in different aspects of climbing, up in the mountains, highballing, DWS… A little over a year ago I began to think about this route in earnest, but with a different mindset. What formerly represented something completely unattainable had now become a goal that I wanted to achieve, a test.

So how did you approach it? Did you climb it clean on toprope before your lead?
Yes, and I spent 5 days working the route. On day 3 I broke a hold. On day 4, after discovering a micro adjustment on the crux at the top, I climbed it clean twice. This was a major breakthrough and meant that after a rest day I could seriously consider tying in to the live end of the rope.

What are the moves like now after the hold broke?
The broken hold is a pebble halfway up, critical for the integrity of the line. Fortunately, the move can still be done, but after it snapped I no longer used it as a foothold (as done by previous ascensionists) in order to ensure what remained didn’t snap off, too. So both the move at half-height and the one at the top have become more difficult. Furthermore, on the first day of trying another pebble snapped off in Dawid’s hand, the penultimate crux hold at the top: this move has now become slightly longer. The route is undoubtedly more difficult now, but I don’t think the overall grade has changed.

Why rope-solo though, instead of being belayed by a climbing partner?
There were so many factors and circumstances that made me climb this route in this style. Due to various commitments, I only had one week for this goal. Apart from my friend Dawid Skoczylas who helped me a lot, especially on the first day, I was always on my own. I didn’t actually need anyone while trying it, on the contrary, I’m used to working routes (highball etc) on my own, but someone was needed for the lead. After the fourth day on the route I started looking around intensely for a belayer, but was unsuccessful. On the day before the ascent, at around midday, I suddenly realised that a rope solo could be an alternative. I knew Dawid would come on the day I wanted to lead it, but I also knew he might arrive late.

Therefore?
Last Wednesday it stopped raining at 1 pm and after I’d walked up to the crag in the afternoon, the first thing I did was inspect the corner to see if a rope-solo was possibile. Then I acted in tandem: on the one hand I said to myself that I’d wait for Dawid, on the other I prepared everything for the rope-solo. When I started to warm up the conditions were crazy, the friction was outstanding! The little pebbles that protrude from the face felt amazing! In the meantime, however, the sun had come out and it shone on part of the slab… I was afraid that the rays would warm the holds.

Hence you climbed it on your own
I was overcome by an inner drive, a need to climb it immediately. The pre-battle tension was positive and also sky high, I didn’t know for how much longer I’d manage to handle such an intense state of mind. So while waiting for Dawid, when everything was ready, I set off on my own! Thinking about it now, during those hours prior to the ascent, and even more so afterwards, I felt like I was in a trance.

Out of interest Filip, what other routes have you done on gritstone?
This is my first-ever gritstone route. I’ve never climbed here before, and on this trip I only climbed this route.

Washington to learn from $503 million focused for out of doors...

Right here’s What We Know In regards to the Seek for...

How Paul Felder Went from UFC Fighter to Triathlete