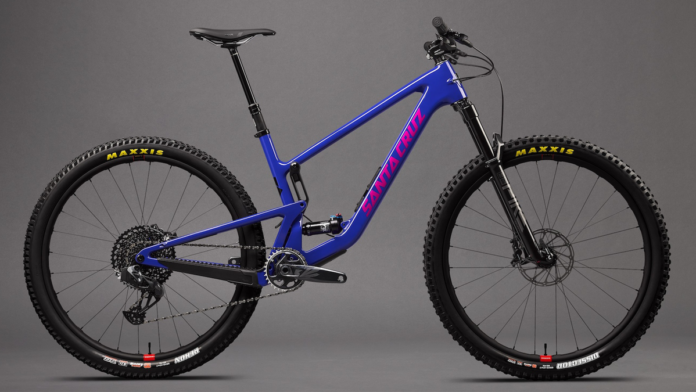 For Santa Cruz, the previous generation of the Tallboy was a bike that became something of a cult classic. It seemed to resonate with nearly everyone that rode it, inspiring all sorts of unique custom builds, some of them focused on eking out as much downhill performance as possible, and others on making into an XC machine with more comfort than a purebred race bike.

Released in 2019, the Tallboy 4 hit the sweet spot when it came to versatility, boasting geometry numbers that allowed it to handle trickier, technical terrain without feeling dull and lethargic on mellower trail. It’s a trail bike through and through, with 29” wheels, 120 millimeters of rear travel, and a 130-millimeter fork.

Santa Cruz didn’t want to mess with a good thing, so the 2023 Tallboy doesn’t deviate that far from the previous model. The geometry has been adjusted slightly, and the same goes for the kinematics, but it’s more of a fine tuning rather than a complete overhaul.

The most obvious change to the Tallboy’s frame is the addition of downtube storage, a feature that’s now found on nearly every trail and enduro bike in Santa Cruz’s lineup, except for the Bronson (at least for now). A small latch next to the water bottle cage allows access to the compartment, and two pouches are included for stashing a tube, tools, and any other snacks and accessories that’ll fit.

Other than the new snack stash, the Tallboy’s frame details haven’t changed all that much. There’s fully guided internal cable routing, a threaded bottom bracket, room for a 2.5” rear tire, and mounts for a chain guide. There’s also a universal derailleur hanger, and a flip chip on the rear shock mount that allows for very subtle geometry changes.

The Tallboy’s seat tube angles are also size-specific, getting steeper with each larger size. That helps ensure that taller riders won’t end up too far over the back of the bike when climbing.

The new Tallboy isn’t any slacker than before, but it did get a little bit longer, with reach numbers that match up with the rest of Santa Cruz’s lineup. The reach for a size large is now 473 millimeters in the low setting, an increase of 5 millimeters. The slightly steepened seat tube angles balance out that increase, creating a top tube length that’s relatively unchanged, which means the seated climbing position will feel nearly the same as before.

Santa Cruz lowered the Tallboy’s leverage ratio to give it a slightly less progressive shock curve, a change that’s also accompanied by a lower amount of anti-squat in the beginning of the travel, and a less aggressive drop off later in the stroke. Those changes were done to increase the bike’s small bump compliance, and to give it a more predictable suspension feel at all points in the travel.

There are 6 models in the lineup, with prices starting at $5,299 USD for the Tallboy C R, which has SRAM NX drivetrain, Guide T brakes, a RockShox Pike Base fork and a Fox Performance DPS shock.

At the top of the line sits the $10,399 Tallboy CC X01 AXS RSV. That’s a whole lot of initials to designate that it has Santa Cruz’s highest end carbon frame construction, SRAM’s AXS wireless electronic drivetrain, and Reserve 30 SL carbon wheels. Suspension duties on that pricey model are handled by a Fox Float Factory DPS shock and a RockShox Pike Ultimate fork.

The Tallboy isn’t a downcountry bike, and it’s not trying to be. Instead, it’s a do-everything machine that has a ‘just right’ air to its handling. There’s no sketchiness or unpredictability to be found—it’s the rider that’ll be bringing those traits to the table, not the bike.

Honestly, I could probably just drop the link to Mike Levy’s review of the Tallboy 4 in here and call it good. There are more similarities than differences between the two versions, and the overall ride characteristics are nearly identical. It’s been a little bit since I last rode a Tallboy, but going off my somewhat fuzzy memories I’d say that the suspension does feel better than before – it’s a little softer overall, which makes the bike more comfortable on choppy sections of trail. There’s still plenty of support, though, and even when I used all of the travel there wasn’t any harshness at the end of the stroke.

The Tallboy’s strength is its versatility—it feels solid, free of any unwanted twitchiness, even on rougher, high-speed trails. The Maxxis Dissector / Rekon tire combo worked well for the dry, dusty conditions that have prevailed lately, although I’d likely put something a little meatier on for wet conditions or to really try to wring out the most downhill performance possible. I’d also probably swap out the G2 brakes for some Codes if I was going that route, since there’s only a small weight penalty and a noticeable performance difference. Still, for general duty the G2 brakes work all right, and a rotor upgrade to the new HS2 versions would be an easier way to bump up the stopping power a little further.

The Tallboy’s handling is very calm and predictable, and the same goes for the pedaling performance – it strikes a nice balance between efficiency and traction. That said, the weight combined with the more muted suspension feel does make it feel closer to a short travel Hightower rather than a longer travel Blur.

That’s not to say that it feels heavy or lethargic—far from it—it’s just there is a noticeable difference between how it feels compared to something like the newest Trek Top Fuel, or even a Transition Spur for that matter. All of those bikes have 120 millimeters of rear travel, but the Trek and Transition sit more on the aggressive XC side of the spectrum, and have more of an appetite for sprinting uphill than the Tallboy.

Those lighter and livelier options are great for riders trying to scratch that downcountry itch, but when gravity takes over it’s the Tallboy that pulls ahead, with a more planted feel that delivers the confidence required to hit higher speeds and more challenging trail features.

As the saying goes, “If it ain’t broke, don’t fix it,” and that’s exactly what Santa Cruz have done with the Tallboy. It’s a refined trail bike, with easy-to-live-with handling and all of the frame features (and corresponding price tag) that Santa Cruz has become known for.