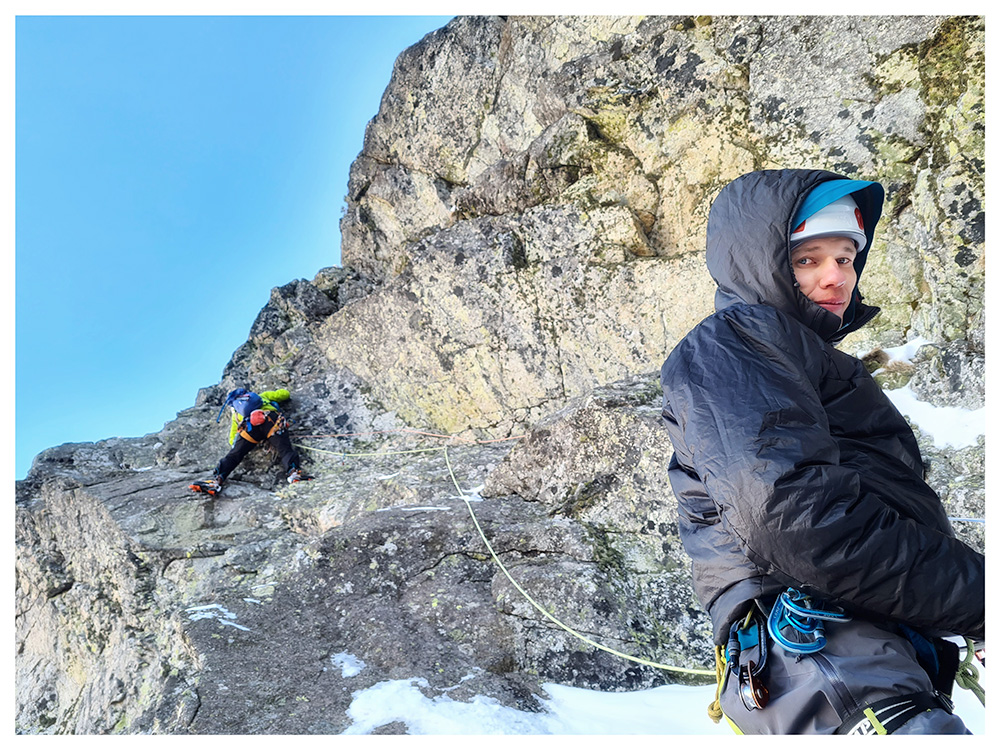 From 2 – 4 March Polish mountaineers Maciek Ciesielski, Piotr Sułowski and Kacper Tekieli made the first winter ascent of Expander, reputed to be the most famous link-up of four existing routes in the Tatras in Poland.

For generations Polish climbers have cut their teeth climbing in their home Tatra mountains. While not the highest, these peaks are rugged and harsh and as such represent an important breeding ground for Poland’s best climbers, in particular in winter when conditions are often extreme. First winter ascents are an important part of Poland’s climbing heritage and a trio comprised of Maciek Ciesielski, Piotr Sułowski and Kacper Tekieli has now made the first winter ascent of Expander, the most famous link-up of all.

Expander is a combination of four routes climbed in Tatra Mountains in the 1960’s by Maciej Gryczyński. All four are named Sprężyna, meaning spring (Gryczyński’s nickname), and ascend Mały Młynarz (350m, VI-/), Kocioł Kazalnicy (200m M7), Mnich (160m, VII-) and Kościelec 90m (VI+). Located on four different walls set circa 30km apart, the climbing includes more than 3000m of elevation gain. The idea of combining them in one non-stop ascent was created in the late 80’s by legendary Polish climber Krzysztof Pankiewicz, and until only recently this linkup had only been completed by 4 parties, and only in summer.

Maciek Ciesielski, Piotr Sułowski and Kacper Tekieli pulled off the first winter ascent from 2 – 4 March in a total of 43 hours and 50 minutes. They decided not to take sleeping bags and climb as light as possibile, using only a minimal rack and double ropes. On day 1 the trio climbed the NE Face of Mały Młynarz and winter free, before continuing through the night up the NE face of Kocioł Kazalnicy. The next day saw them climbing the East face of Mnich (some aid), while the West Face of Kościelec was climbed with the help of some aid the following night. Doing without deposits, external support or huts, the trio rested for only about 3 hours in total, including a 1 hour nap.

All team members have plenty of experience climbing long linkups, but this time each of them hit “the wall luckily, not at the same time. We were good team, we were able to help each other and finally realized our big dream.” commented Ciesielski after the enchainment.

Why Are Financial institution Inventory ETFs Climbing So Excessive?