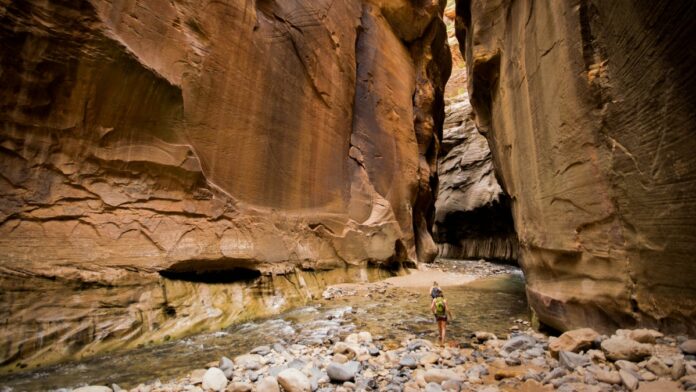 Heavy rains and flash flooding in the Southwest this weekend prompted rescues at two national parks and left one tourist missing in Utah. The region is bracing for more monsoon rains, which could bring additional damage.

On Friday, a flash flood at Utah’s Zion National Park swept multiple people off their feet in the Narrows, a popular slot canyon that cuts between 2,000-foot-high cliffs. At least one hiker sustained injuries and was carried several hundred yards downstream before being rescued by park rangers and transported to a local hospital. Others were able to wait out the flooding on high ground before being evacuated.

Later Friday evening, Jetal Agnihotri, 29, of Tucson, Arizona, was reported missing after she did not return from a trip in the Narrows. Agnihotri’s friend Mostafa told news station KSL-TV that he and another friend were planning to hike the famous slot canyon with Agnihotri, but they decided against it due to the flash-flood warning, so Agnihotri headed out on her own. “She wanted to do the Narrows more than us,” said Mostafa, whose last name was not publicized by the news station. “Now I wish that I did ask her not to go.”

The Narrows and Riverside Walk, a 2.2-mile trail that follows the Virgin River, remain closed on Monday as officials continue looking for Agnihotri.

Scenes of the flooding captured by drones show the normally quiet Virgin River transformed into a muddy and raging torrent.

At Carlsbad Caverns National Park in southern New Mexico, nearly 200 people were stranded on Saturday after a flash flood washed away a main road. Tourists and park staff sheltered for nine hours before being evacuated just before midnight, according to news station KOAT-TV.

Officials conducted multiple rescues during the downpour—they saved a family whose vehicle had turned on its side, as well as a couple who found themselves stranded on the roof of their car, The New York Times reported. The park reopened to the public Monday morning.

On Saturday evening, heavy rainfall near Moab, Utah, generated what some are calling a “100-year flood,” the Salt Lake Tribune reported. Between an inch to 1.5 inches of rain fell in the area that night, with most precipitation hitting the ground in a 20-minute period between 7:10 and 7:30 P.M. Videos on social media show cars floating down the small city’s main street, where the water was up to three feet deep, city spokesperson Lisa Church told the newspaper.

Video of Main Street in Moab turned into a river. A car in this video was pinned to the curb by the Main Street water current pic.twitter.com/I4bt3rAtvo

As of Sunday morning, Moab’s Mill Creek Parkway trail system was closed, according to a tweet from the city. Damages to waterline breaks have left many residents without potable water.

Parts of Arizona also saw excessive rainfall over the weekend. Flash floods closed roads in Tucson, as the National Weather Service measured more than three inches of rain on Saturday near the city. Mass evacuations are currently underway in the small eastern Arizona town of Duncan, where the Gila River is overflowing.

Despite the deluge, much of the Southwest remains in an extreme 23-year drought driven by climate change, Jonathan Deason, an environmental engineering professor at George Washington University, told Bloomberg Law last week. “It’s going to take about three years of above-average rainfall to have substantial recovery,” he said.

The Finest Snowboards of 2022

Salt + Snow Affords Nice Out of doors Gear For Children...