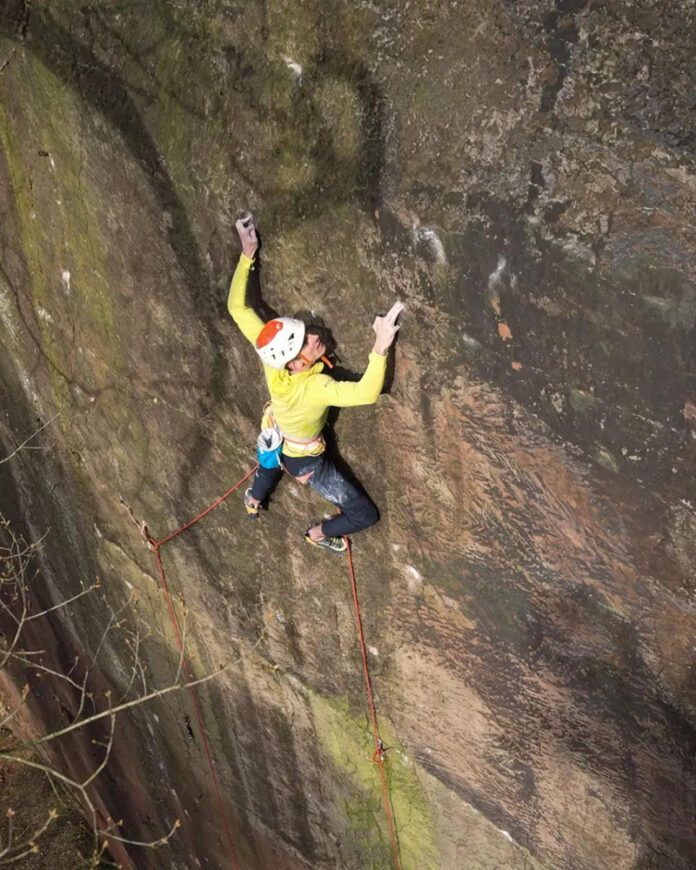 At Nesscliffe, England, Franco Cookson has made the first ascent of The Sandman E10 7a. During the previous weeks the British rock climber has repeated The Meltdown 9a in the Dinorwig slate quarries at Llanberis in Wales, as well as repeating Hold Fast, Hold True E10 7a at Glen Nevis in Scotland.

For many years the efforts of Franco Cookson had gone by largely unnoticed even in the close-knit UK trad climbing scene, mainly due to the fact that many of his dangerous ascents occurred on esoteric outcrops in Northumberland and across the North York Moors. His first ascent of Immortal E11 7b at Maiden’s Bluff, regarded as one of the hardest trad climbs in the country, was documented in the award-winning Brit Rock Film Tour and this certainly helped Cookson receive the recognition he deserves, and of late he has scored an impressive run that warrants closer examination.

At the start of March Cookson got the ball rolling with only the third ascent of The Meltdown, the former Johnny Dawes project in the Dinorwig slate quarries above the village Llanberis in Wales. Freed by British rock climber James McHaffie in 2012, this hyper-technical slab had been repeated by Spain’s Ignacio Mulero in 2018. Cookson’s repeat marks an unprecedented leap in sport climbing grades since he skipped the 8th grade entirely; somewhat remarkably, his former sport climbing best was “only” 7c+!

A few weeks later, Cookson returned to the austere Twll Mawr hole to add a spectacular direct finish to the Meltdown pitch, where this breaks off right after the crux; although no grade has been put forward, it contains a move which Cookson believes is “harder than any on the meltdown.” Not content, he then freed a second-pitch extension which now goes at tricky 8b.

Capitalising on this form Cookson travelled to Glen Nevis in Scotland where, aided by a few crash pads and pretty much nothing else, he repeated Hold Fast, Hold True. Graded E10 7a, this slab adds a direct finish to Holdfast and was first climbed by Julian Lines solo in 2013. After working it on toprope, Cookson led the route and described it as “thoroughly in the ‘lifetime ticklist’ category. Just brilliant and complete type one perfection.”

After this repeat, Cookson made his way to the sandstone crag Nesscliffe where he pulled off the first ascent of The Sandman which adds an impressive direct topout to GreatNess Wall, first ascended by Steve McClure in 2019. Cookson explained “I finish direct, using none of the same holds at the top and climbing in two moves what otherwise takes many more to the right.” The grade put forward is E10 7a, indicating another major British trad climbing test requiring nerves of steel.

Landro Classica, the oldest crag in Höhlensteintal within the Dolomites

How To START a Food regimen | How Many Energy To...