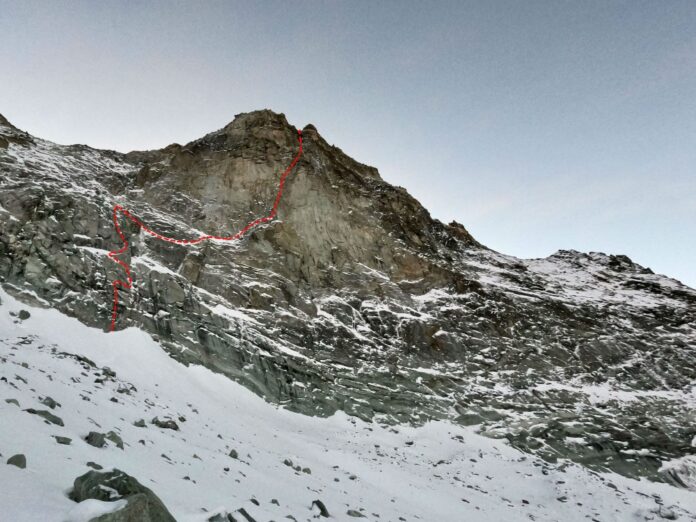 On 11/11/2022 Silvan Schüpbach and Peter Von Känel started their winter climbing season early with the first ascent of the mixed climb ‘Frigo-combo’ (M7/6a, 450m) on the NW Face of Douves Blanches (Point 3582m) above Val d’Arolla in Switzerland. Schüpbach reports.

The northwest face of Douves Blanches is a somewhat unknown, but impressive wall in Val d’Arolla. On the 11th of November Peter Von Känel and I managed to climb a partially new route through the circa 400, high NW Face.

I’d had this wall in mind for some time, but because it looks so steep and difficult, I’d considered climbing it in summer. Nevertheless, since Peter is an extremely strong partner and the conditions in the Arolla region seemed to be ideal, we decided to make an attempt in wintery conditions.

We approached the mountain early in the morning and at first light we saw the wall for the first time close up. We quickly agreed what line we’d like to try and started up the route. The lower part of the wall offers pleasant cracks across slabby terrain and some snow and ice fields. The climbing was never easy and as a result we progressed slowly.

The upper section of the wall became really steep and we climbed some brilliant drytooling sections. The higher we got, the looser the rock became. The last two pitches consisted of blocks of different sizes all wedged together. The risks on this last section the of the wall should not be underestimated.

Nevertheless, we came across some pitons – other climbers had evidently ventured into this unflattering part of the wall. We reached the ridge at dusk and guided by the lights of our headlamps we abseiled down the wall, off improvised belays. After 17 hours we returned safely to the valley floor and celebrated another great adventure together.

We’ve named the line Frigo-Combo: Combo, because at least a part of our climb followed an existing route, and refrigerator because this corresponds to the average size of the boulders we negotiated on the upper section of the wall.

Climbing-World group apologises to Austrian climber for ‘objectification’ in broadcast |...