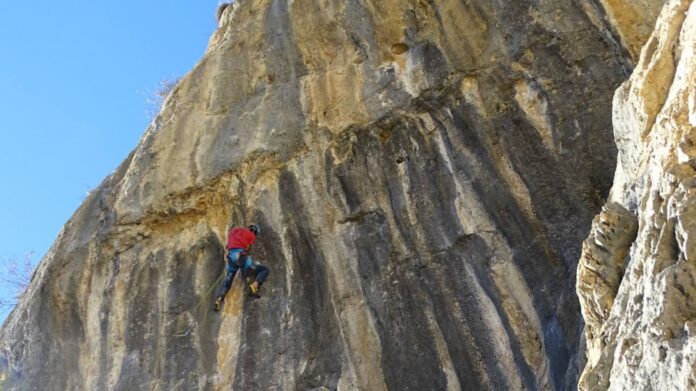 19-year-old Italian climber Giorgio Tomatis has repeated Lapsus, the 9b at Andonno established in 2015 by Stefano Ghisolfi.

Yesterday morning Giorgio Tomatis repeated Lapsus, the 9b at Andonno in NE Italy established by Stefano Ghisolfi in 2015 and previously repeated by Adam Ondra (2017), Marcello Bombardi (2021) and Jonathan Siegrist (2021).

The +70 move route became famous for becoming Italy’s first 9b, then Bombardi suggested a downgrade to 9a+/9b after finding a kneebar that provides a good rest before the last final boulder; Tomatis climbed without the kneebar and in this style it appears to be 9b. Either way it’s an impressive performance, even more so when you consider the fact that Tomatis is only 19 years old.

After his redpoint, Tomatis told planetmountain “It’s a truly magical line, the connection of all the hardest routes in the most famous sector at Andonno. I climbed it without a kneepad, and by all accounts climbing it the way Stefano did without a kneepad it’s 9b. Now I feel really satisfied. Climbing this route has always been my biggest dream and I’m really happy to have made it come true.”

Tomatis’ progression is worth examining: in 2015, aged just 12, he climbed his first 8a, choosing none other that France’s first 8a, Rêve De Papillon at Buoux, while in 2016 his redpointed first 8b. At the start of 2017 at Andonno he repeated Noi, the historic 8b+ put by Andrea Gallo, while towards the end of the year he filled the obvious gap and sent the 8c+ Noia, put up in 1993 by Severino Scassa.

In 2020 and at the age of sixteen he climbed his first 9a, WRC at Castillon, while last winter he repeated the 8c+ L’extrema cura plus at Gravere, Grandi Gesti at Grotta dell’Arenauta (Sperlonga) and Chiodino Trip at Frosinone. Other important repeats include Estado Critico at Siurana, Mistero (9a) and Cobra Reale (8c+/9a) at Andonno, but it is clear that Lapsus now marks a significant step forward in his climbing career.

TREE CLIMBING: Of outlaws and horses – catching up on historical...