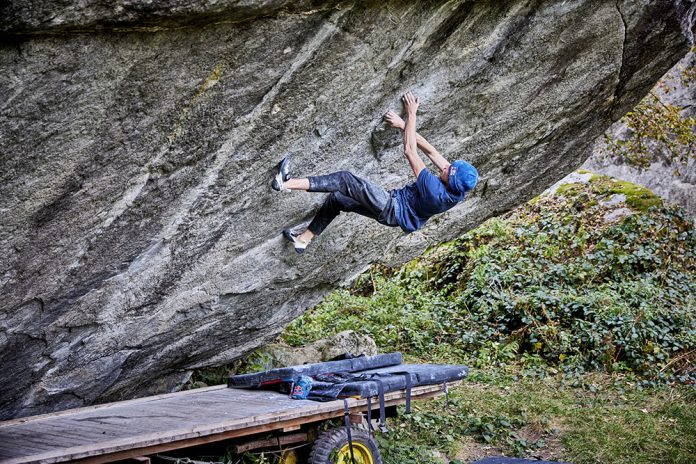 Swiss rock climber Giuliano Cameroni has made the fourth ascent of Off the Wagon, established by Shawn Raboutou in Val Bavona, Switzerland graded 8C+/V16 and hitherto repeated by James Webb and Daniel Woods.

After six years of effort Switzerland’s Giulano Cameroni has finally kept it together to climb Off the Wagon sit, the intense boulder problem freed at the end of 2018 by America’s Shawn Raboutou and repeated in early 2020 by his compatriots James Webb and Daniel Woods. As the name suggests, Raboutou started off the characteristic farmer’s wagon but, unlike his predecessors, he started sitting down instead of standing up. Thanks to this sit start the bloc checked in as Switzerland’s first 8C+.

Cameroni has now repeated the exact same line using the same rail starting hold for his hands and, interestingly, he started with his feet firmly on the ground, having moved the cart to one side beforehand.

23-year-old Cameroni puts his success down to a fundamental change in mindset. Writing on IG, he commented “The day of the send, a sudden change happened: I was sitting underneath as always when I realized that I had a choice between having fun or desperately trying again. This realization put me in a great state of flow free of negative vibes and fear of failing.” He failed going for the jug, shrugged it off laughing, and then sent it next go.

Nevada’s outside recreation trade poised for a comeback

This Reasonably priced 4-Season Camper from Complete Composites Is a DIY...