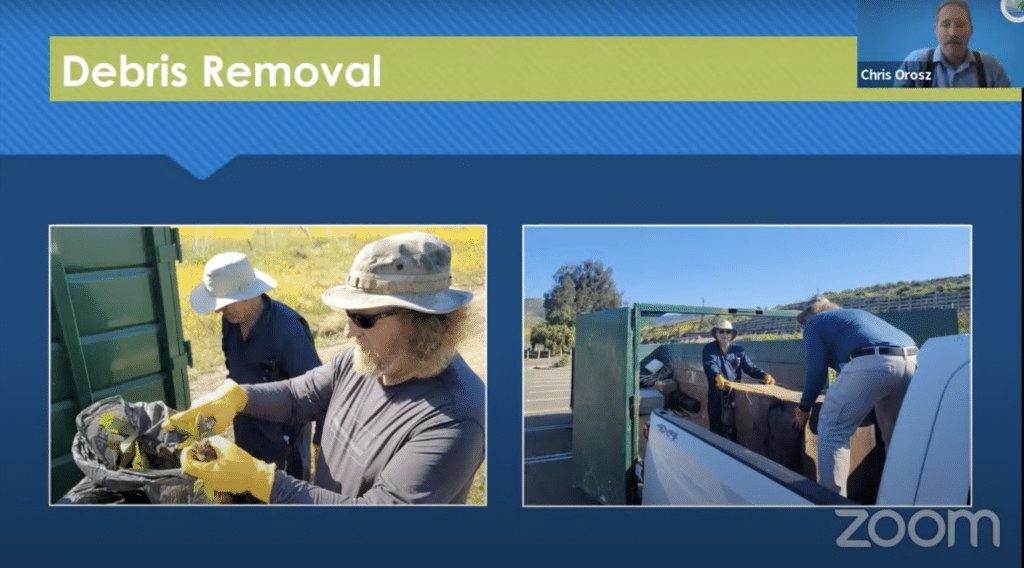 During the Parks and Recreation meeting on Tuesday, May 17, the commissioners reviewed the Community Services Department’s monthly report, reappointed Commissioner Georgia Goldfarb to the panel, and presented the Jake Kuredjian Citizenship Award to Sandy Banducci and Roy LeMond.

The Jake Kuredjian Citizenship Award is presented annually to an outstanding individual or group who devotes their time and resources to improving the quality of recreation programs for the Malibu community.

The commissioners also reviewed the removal of non-native plants at Trancas Open Space and the BrightGuard sun protection station program.

Recreation Supervisor Chris Orosz reported that a ton of debris and rubbish was removed from the sites, including a 250-pound fridge. Orosz said the most littered places are the pull-out areas, which make it easy to park and leave all types of litter, from yard waste to countertops. Orosz said the department has ordered a “no-dumping” sign posted at the site and plans to add more “no-dumping” signs and make the debris clean-up a semi-annual review of the site.

Goldfarb asked the department how they could review the maintenance of trail parks, where foxtails are a dangerous problem for visitors, pets, and wildlife.

“BrightGuard is proposing a sun protection station at various city facilities from July 1 to October 31,” Gallo said. “In this proposal, BrightGuard will maintain it at least weekly in terms of station refills and area cleaning.”

BrightGuard has proposed seven stations, including two at Malibu Bluffs, one at Malibu Community Pool, two at Legacy Park, one at Trancas Canyon Park, and one at Malibu Equestrian Park.

The program implementation runs from July 1st to September 5th.

BrightGuard co-founder Alexander Beck spoke during the public comment and provided an update on the proposal.

“This initiative provides free sunscreen to local community members, particularly in some strategic areas where there are playgrounds. [and where] There are outdoor activities that involve prolonged exposure to UV radiation,” Beck said. “The tremendous importance of free sunscreen…this is what UCLA sees as a public cancer prevention initiative.”

Community Service Director Jesse Bobbett presented the third quarter update to the Earth Friendly Management Policy. The policy set by the city council in 2019 bans the use of poisons and pesticides. At the time the policy was approved, there was no Environmental Commission, so the Parks and Recreation Commission assumed oversight of the policy. The quarterly report runs from January 1st to March 31st.

The Commission approved the receipt and submission of the Earth Friendly Management Policy.

Gallo updated the commission on the department’s water sports programs for the summer quarter, which began May 15. The city also held a lifeguard certification course on May 21-22 to hire part-time employees. Bobbett said the department is also investigating the Wi-Fi and emergency call boxes at Trancas Canyon Park and Las Flores Creek Park.

The Parks & Recreation Commission meets on the third Tuesday of every month.

“South Arkansas Outside Social” will likely be two days in September...

Ask the Grasp Gardener: It’s not too early to plant climbing...