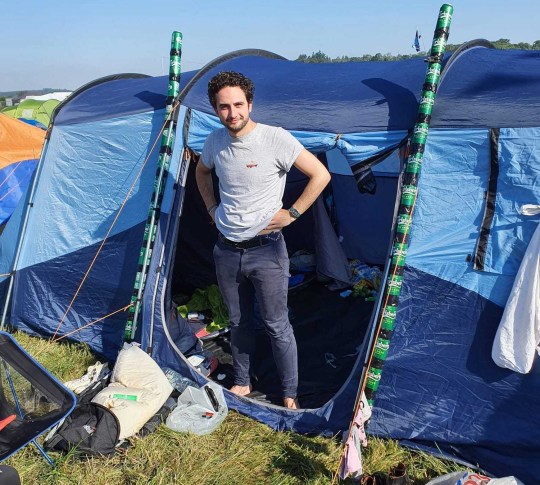 I didn’t feel half bad after four days in a field (Image: Getty Images/EyeEm)

I shouldn’t sleep in a tent.

When my friends and I got tickets to Reading Festival, it was natural for us in our late 20s and early 30s to book an AirBnB. “We are old,” we said. “Definitely too old to camp surrounded by people celebrating their graduation.”

After securing affordable accommodation months before the festival, we felt complacent, patted ourselves on the back and looked forward to being clean, sleeping in beds and having access to real flushing toilets.

Our AirBnB had other plans and canceled less than a month before the festival, which caused us to panic.

Booking anywhere else would have bankrupted us so the only option was to pitch a tent.

I don’t sleep well at the best of times. My buddy Remy has a 12 step beauty routine and needs access to a sink. My friend Onno takes the longest shower known to man and likes to belt out some Frank Sinatra. My friend Jack is big and not the biggest fan of crouching in and out of tents. None of us like a drop toilet.

Our tent had plenty of headroom, as Onno demonstrates (Photo: Jess Austin)

Determined not to let this last minute change of plan ruin the weekend, I decided we would leave the campsite refreshed. If not refreshed, then at least without making us sick afterwards while we iced our joints.

First things first, we needed a tent. We managed to find a six piece in good condition on Facebook marketplace. Aside from being pretty damn bulky and uncomfortable to wear, it gave us plenty of room to breathe.

It was also big enough for us to stand in, which our desk job with back pain greatly appreciated. Surrounded by other campers with their pop up tents, it was a relief to be able to go straight inside.

Still, a tent is never really the most private space. So we got a separate one. 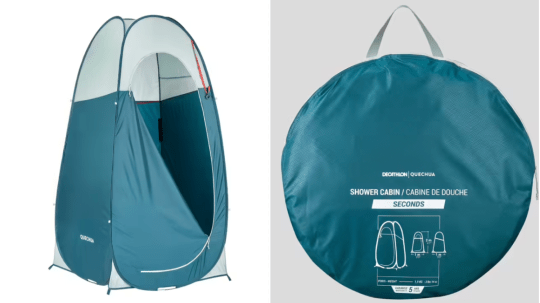 Decathlon’s pop-up shower stall that doubles as a changing room came in really handy for this. It felt pretty luxurious to have a camping version of a walk-in closet.

Unfortunately, we haven’t found a way to attach the accompanying camp shower without causing the tent to fall under its weight. However, the cabin was a great place to have a wet wipe shower – the next best thing.

However, the shower itself proved useful. There were no working showers anywhere on the campsite for the first three days of the festival. On the second day we started smelling and felt very grumpy about it.

So the guys took it next to the water station (it wasn’t fair to turn it on because of the water runoff near other tents), filled it up, attached it to metal barriers and let it rain.

We hadn’t had time to let it warm up but it did an amazing job of cleaning us up. 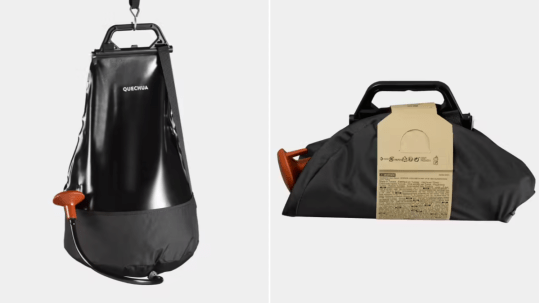 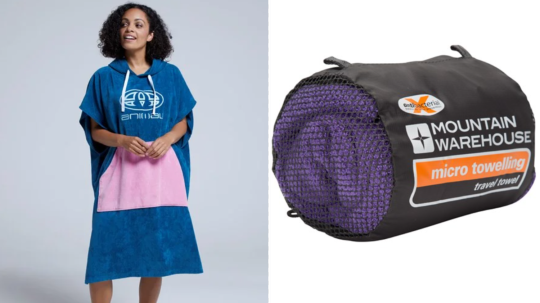 After that we were armed with an Animal Toweling Poncho and a Micro Travel Towel. The former, while bulky to carry, turned out to be the most valuable item of clothing I brought with me.

It was perfect for drying off, going to and from the showers, and I could dress underneath while using it as a shield of modesty. The travel towel was small enough to fit in a loaded backpack, dried quickly and was a really decent size when rolled up.

We were clean, we had a lot of space – so far so good. But did we sleep? Most of time.

After setting up a huge tent in the pouring rain, I couldn’t bear to inflate inflatable beds any longer. Luckily we had mattresses that did the job for us – a single mattress and self-inflating and a double mattress with a built in pump. 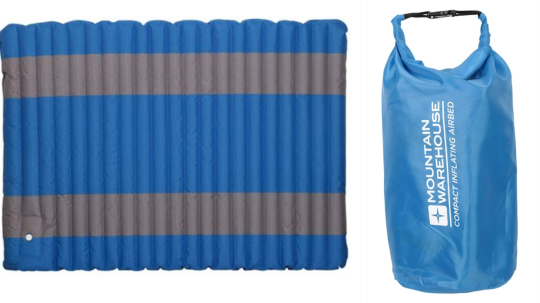 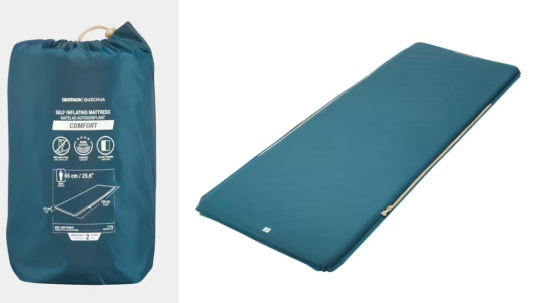 I was really impressed with the single. It was up and running in minutes and Onno, who used it for the long run, said it held its inflation really well.

We had a bit more trouble inflating the double and ended up borrowing a pump from our neighbors – something Jack says might be his fault for not reading the instructions properly (guys, eh?).

When inflated it was very comfortable and made of a quality material. Unlike other double mattresses, it didn’t take up too much room in the tent – or in our bags.

The Forclaz trekking sleeping bag I used was very nice. When I got back to our tent after that first night, I was in right away.

Thin but still able to keep you warm (it’s rated for temperatures above 0 degrees) felt tight. In the morning, when the tent turned into a greenhouse, I didn’t overheat; and when the temperature dropped (except on a very cold night) it kept me warm. 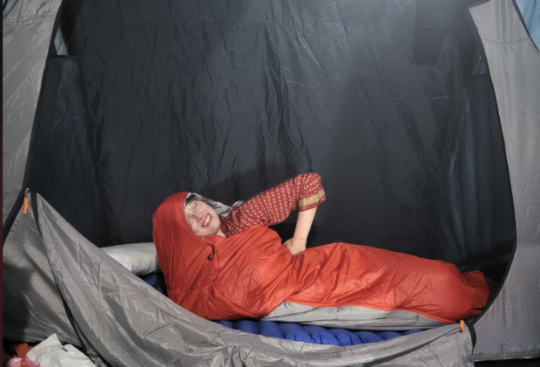 I got a solid eight hours (Image: Jess Austin) 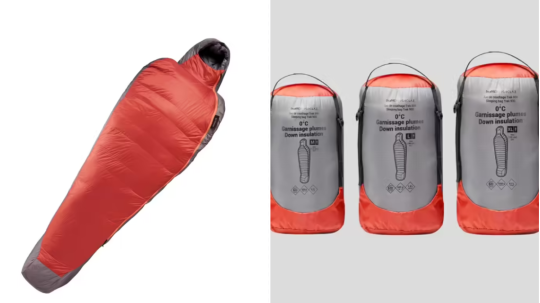 What I would like to say about this sleeping bag is that I slept despite drifting in and out in the almost arctic conditions that night. My friends had to dry their sleeping bags the next day because it was raining through the tent, but I didn’t have to.

To achieve that rested feeling, I also invested in sleep accessories. An eye mask was a must as the sun shot through our ‘walls’ in the mornings. Earplugs were also needed to block out the sounds of drunken revelers setting things on fire.

Then there were the other essential items that we bought to make the whole experience a little more enjoyable.

As we all know, the worst part of festival camping is the toilets. With that in mind, I made my best buy: toilet seat covers.

That layer of separation between my butt and reality was enough to take the edge off.

When I got home on Monday morning, I wouldn’t exactly say I felt as clean, relaxed, and rested as I would have lived in a real house, but I didn’t feel half bad.

I definitely washed more regularly than the majority of the other participants; Thanks to our water tank, I was hydrated; had slept well for eight hours most nights; and my body didn’t scream out in pain like I expected.

That’s pretty good for four days in a field.

This article contains affiliate links. We receive a small commission for purchases made through any of these links, but this never influences our experts’ opinions. Products are tested and verified independently from commercial initiatives.

Do you have a story to tell?

MORE : Forget glamping, this is your ultimate guide to extravagant camping (flamping)

MORE : If you have already paid for your holiday, you may have to pay more

Get essential travel news, inspiration and advice from Metro every week.

Elevated visitors might imply hazard in Utah’s climbing locations, and the...