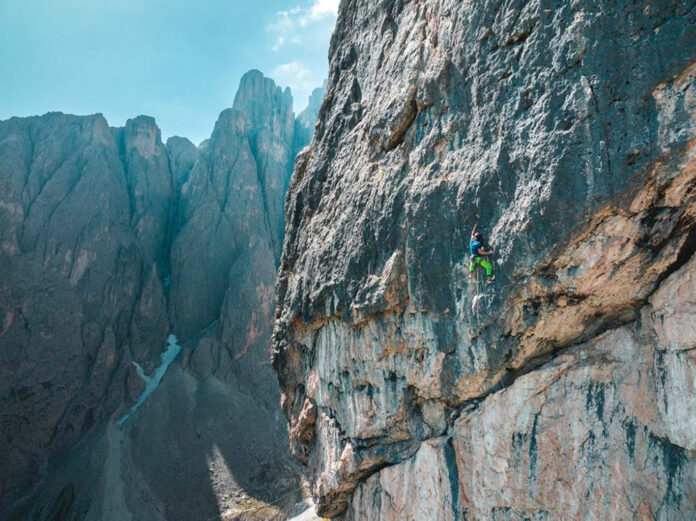 On Sunday 22nd May 2022 I received a call from Simon Gietl and after chatting and joking around a bit, he came straight to the point and told me about a new line. He seen it while driving home after a via ferrata, thanks to favourable light conditions, high up on Crep de Boe, right next to his Scharfe Helene which he’d first ascendes with Mark Oberlechner.

It didn’t take long for him to send me a photo of the wall, and on the 26th of May we met up and drove into Alta Badia. Simon already knew the approach, so we got to the base of the mountain quickly and after briefly discussing what line to take, we started up our route. We made good, fast progress because that day Simon established all pitches onsight. After a few pitches we reached what we reckoned was the crux, but Simon managed to onsight this one, too. 370 meters of climbing and eight pitches up to UIAA VIII resulted in Halli Galli. The weather wasn’t particularly stable and we abseiled off quickly, and while Simon rapelled I took a quick photo of the nearby wall which, as things turned out, Simon had already put his eye on!

Less than two days later we called each other again and on 28 May we headed, fully loaded, to the base of nearby Torre Colfosco. Simon had done his homework and we knew therefore that the line had already been tried, but we’d been given the all clear to complete it. We looked for pegs or other signs of passage but couldn’t find anything, so we chose our own line.

The first pitches led up easy terrain across the finest, compact, black rock you can imagine until you reach a roof. It was obvious already that the route was transforming into a pearl of the Dolomites. Highly motivated Simon jumped onto the next pitch, a steep roof, full of holds. He quickly identified the weak points and powered up to the next belay.

A quick glance upwards and we both realised that the hardest part was still ahead of us. Highly motivated Simon tackled the next roof, but this proved harder than we thought and we had to turn back late in the evening. A week later we managed to complete the route and Simon freed all the pitches. Finding the right name wasn’t difficult, the new route is called La perla nera, the black pearl, due to the beauty and nature of the rock. Now two new multi-pitches with unique rock and established in traditional alpine style are ready to be repeated! Have fun!

Rock Climbing With A Sherp At Moab Appears to be like...

Benefit from the Nice Outdoor at McLean County Fish & Recreation...