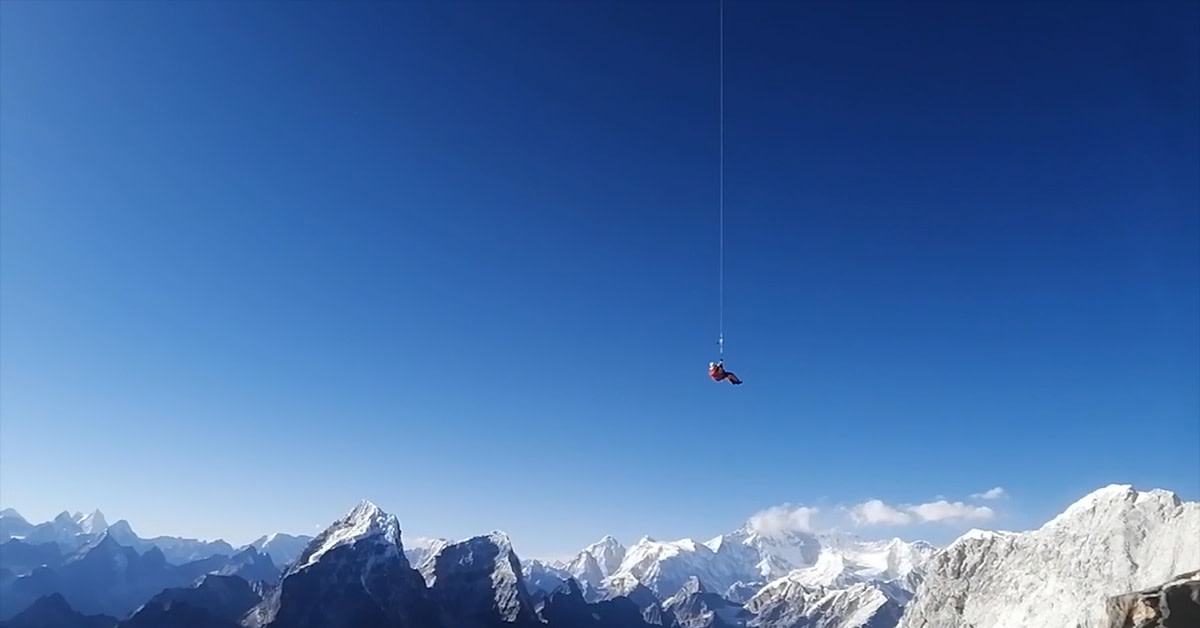 The Mount Everest spring climbing season is looming and experts, like Alan Arnette, are predicting record crowds  made up from a mix of mountaineering skill levels—despite the pandemic. Big crowds and varying skill levels will mean heavy traffic on the tallest mountain in the world—as well as other popular Himalayan mountains. This combination of factors likely will lead to a higher demand for rescue operations for climbers in distress from altitude sickness, frostbite or any number of other injuries that can occur during an expedition.

Mountaineering above the 6,000 m (nearly 20,000 ft) elevations is risky in its own right. Getting stuck at those altitudes, or higher, can be deadly. If conditions like the weather, imminent nightfall, exhaustion or limited resources prevent your climbing team from assisting you to safety then your rescue options dwindle. Sometimes, in addition to all those factors, a climber needs rescue after reaching a section of the mountain that’s challenging due to exposure, high degree pitches or uneven terrain. At that point one of the only options available is a long line helicopter rescue.

Mingma Sherpa (who goes by Mingma) agrees. He holds the record for a high-altitude, long line rescue. “There are technical areas of a mountain that make landing a rescue helicopter impossible. In that case, a long line rescue is needed,” he said.

Long lining rescue with helicopters has been utilized for quite some time in areas such as the European alps, but it’s relatively new to Himalayan peaks. It’s uncertain if climbers might tend to push their limits beyond normal, knowing that this option is available.

The ability to extend a rescue line, with or without a rescuer attached, allows the helicopter to remain clear of obstacles or avoid landing on uneven, unstable terrain while a rescue is performed.

There are five key pieces of equipment needed for a long line helicopter rescue system.

Depending on the type of helicopter used and the weather conditions, the maximum altitude for rotorcraft rescue operations can vary. If a distressed climber needs rescue from elevations above a helicopter’s altitude limit then a two-person, pilot and rescuer, hybrid operation gets underway. The rescuer will use the long line to descend to the ground and then make their way to where the injured climber is to initiate the extraction.

Long line rescue flights can last a few minutes, or longer, depending on the rescue requirements. Direct flights from the mountain to a hospital take up to 30 minutes, but going from the rescue site to a lower, safer camp or base camp may only take a few minutes. Mingma said typical flight times are about 15 minutes but he adds that wind and cloud conditions make a difference.

“The pilot may have to re-route his flight path to avoid bad weather,” he said.

Long line rescues are not a guarantee but they are undoubtedly lifesavers. It’s what Satyarup Siddhanta needed—and likely saved his life—during his Ama Dablam (22,349 ft/ 6,812 m) summit attempt.

“If it was not a timely rescue then I could have been in big, big trouble and perhaps my mountaineering career would have ended,” he said.

Ed Viesturs is a member of the Global Rescue Mountain Advisory Council and the only American to have climbed all 14 of the world’s 8,000+ meter peaks, and the fifth person to do so without using supplemental oxygen.

The Berkshire cat who loves climbing Snowdon along with his canine...

10 Adventures Between the Black Hills and Yellowstone

‘We Are All Manufactured from Stars’ gala Sept. 11 to profit...