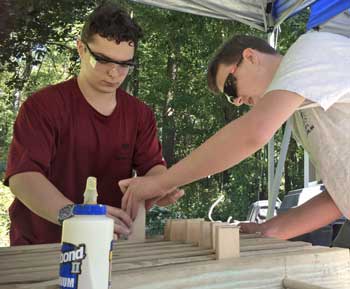 An Eagle Court will be held in late September to celebrate a close-knit group of nearly a dozen young men from Harvard who have earned the honor of becoming Eagle Scouts. It is one of the largest groups of Boy Scouts in the city’s history to have attained the highest path of Boy Scouting.

As part of the second series of vignettes, the press shares Eagle Scout projects completed by Alex Myles, Sawyer Madison and Jack Babcock.

Alex Myles considers the city beach his home away from home. It was where he spent most of his summer days growing up, either taking swimming lessons or having fun with family and friends. In middle school, Myles got a volunteer job on the beach and eventually a paying job as a water safety assistant and lifeguard. The Eagle Scout project, which Myles designed with Parks and Recreation Commission Chairman Bob O’Shea, was his way of giving back to a place from which he had received so much.

“I knew from working at the beach that paddleboards are very popular and people love to ride them,” Myles said. Over the course of seven months, Myles designed, built and installed a new paddleboard rack system for board owners and renters. The rack, which was completed last September and is made of plastic PVC tubing, can hold 10 paddleboards.

O’Shea had bought four additional paddleboards for the beach after realizing they had been the most popular type of boat rental in recent years. Seven paddleboards and a couple of kayaks are now stored on the new rack. “We’ve had people renting paddleboards every day,” O’Shea said. “If we had more people like Alex, we could do all kinds of projects.”

While the project went smoothly due to months of perfecting the blueprints, Myles said his biggest obstacle was building the actual rack. He explained that the connections of the pipes are not all exactly the same. “We had to accommodate that by making some pipes a little longer than others,” he said, adding that it was time-consuming.

Myles said he was grateful for the financial and cooperative support he received from the Commission. “[The beach] was a super personal place for me, and it feels good that a part of me will be there until that rack deteriorates,” he said.

The tennis courts behind Bromfield are used by the school tennis team, pickleball players and the wider community. When visiting the courts, there was a lack of seating and accessible places to put water bottles. The rebound wall was covered in graffiti and fell into disrepair. Sawyer Madison, a Bromfield tennis player and Eagle Scout, wanted to address these issues for his project on the courts.

“There was a bench before, but it was gnarled and rotten,” Madison said, adding that he wanted the plazas to be a welcoming place for older residents as well. “I built a set of three benches for the pitches myself so people have a place to sit between games and games.”

Madison evenly distributed his benches across the four courts to maximize their accessibility. He bought the materials from a Home Depot in Leominster, which he explained has set aside a charitable fund for specific projects. “They could allocate $500 a month to each nonprofit project, so I spoke to their manager and told them what I was doing,” he said. Home Depot paid for most of its materials.

With the help of scouts older and younger, Madison also sanded, resurfaced, and repainted the tennis rebound wall next to the courts. An avid and passionate tennis player, Madison said he’s glad to have completed a project he’ll use often, and that he’s already “seen the people who play pickleball in the summer enjoying the benches.” 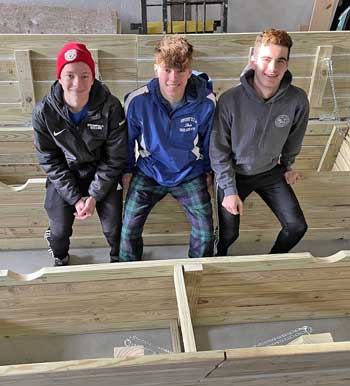 During football practice and games, Jack Babcock noticed that he and his teammates lacked a place to rest and store their belongings. To address this issue, he decided to design and build two camp benches for the Parks and Recreation Commission as his Eagle Scout project. While the benches would provide a place for athletes to sit, they would also double as watertight storage units for textbooks, laptops and soccer gear.

Babcock raised $650 through GoFundMe to help cover building materials costs. “It was a little tricky because lumber prices were fluctuating all the time as I was trying to figure out how much it would cost,” Babcock said while presenting photos of his finished project at the Feb. 7 Parks and Rec meeting.

When it comes to helping Boy Scouts make their Eagle projects a reality, O’Shea says the commission has two main goals. “First we try to give the Scouts some experience of working with a board and getting their idea approved,” he explained. “Then we ask them to find some funding as part of their learning experience, and we’ll bring in the rest.”

Babcock completed the construction of the two waterproof benches in December and they have since been moved to the Depot Road pitches. O’Shea said the storage benches will see more use this year with the reopening of the Upper Depot, which had been reseeded and rested. “We are very happy with them; the benches are a great addition to the fields,” said O’Shea.