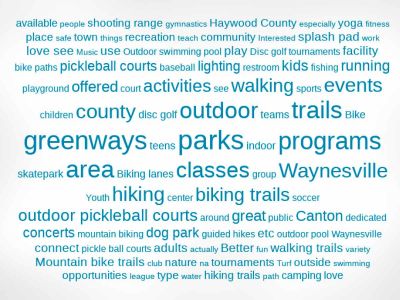 Haywood County is known for its outdoor recreation opportunities, which boost both tourism and the local economy. Now, after the county approved a 236-page recreation master plan last week, commissioners are trying to stay ahead of the competition in the outdoor recreation game.

“We’re really at the forefront of what this movement is now,” said David Francis, Haywood County’s community development director.

Francis told commissioners on April 3 that he recalled a working session a few years ago when the county prioritized outdoor recreation, which has now become a booming industry, but the county’s existing master plan was so old that he prevented the county from seeking grants. The new plan solves this problem.

“This will enable the county to apply for PARTF (grant grants from the North Carolina Parks and Recreation Trust Fund) and other grants to cover the cost of the proposed facility expansions and staffing that the new plan calls for,” said Kevin FitzGerald, chairman of the Haywood County Recreation Advisory Board.

The Comprehensive Recovery Master Plan, which will remain in effect through 2032, was created after taking stock of the county’s existing park facilities, asking county staff about their needs, and weighing public contributions. By using state and national standards to support the plan’s recommendations, the county now has a clear picture of what it has and what it needs.

The poll reached more than 1,600 people, 92% of whom are Haywood County residents. The largest age group was 35-44 years old, and 65% of them do not live within 10 minutes’ walk of a park or recreational facility.

That’s a problem, at least for a partnership of nonprofits banded together to promote the so-called “10-Minute Walk Movement,” which aims to give every American access to a park or green space within 10 minutes walk from home enable 2050.

By far the majority of respondents stated that they wanted additional trails and greenways. Nearly 94% said they would support additional greenways or trails connecting to destinations inside and outside of Haywood County.

Other key goals of the plan include increasing ADA compliance, maintaining the design and maintenance of existing recreational spaces, more facilities and trails for bicycles, and the possibility of a development ordinance that would fund the acquisition and construction of greenway land.

Based on Haywood County’s current population and the standards offered by report author McGill Associates, a significant expansion of recreational facilities is required to efficiently serve the county’s 61,000 residents—from softball fields to fishing spots. As the population grows to 67,000 towards the end of the plan’s useful life, these needs will also increase.

In the near term, the plan calls for a number of improvements to Allens Creek Park, including fitness stations, bouldering and pickleball courts. A master plan is also recommended for Glance Street Park.

The long-term plan calls for the expansion of Glance Street Park and the design and construction of a so-called “county park” that would be between 75 and 200 acres.

Commissioner Brandon Rogers, who serves on the Haywood County Recreation Advisory Board, said he’s pleased the county is moving forward.

“It’s something that probably should have been done sooner, to be completely frank,” Rogers said. “We have had a master plan since 2006. I’m glad we’ve come this far and been able to figure out what the community wants and how we’ve talked about it, is what outdoor recreation is all about.”

Recommendations in the plan are just that—recommendations. Any proposed project, improvement or acquisition is subject to Commissioner approval.

Get your motor working: Climbing behind the wheel of at present’s...

Have a look inside Summit Up climbing centre coming to Larger...

In a single day tenting charges taking chomp at your pockets...

Library playing cards may be keys to unlock entry to Minnesota’s...