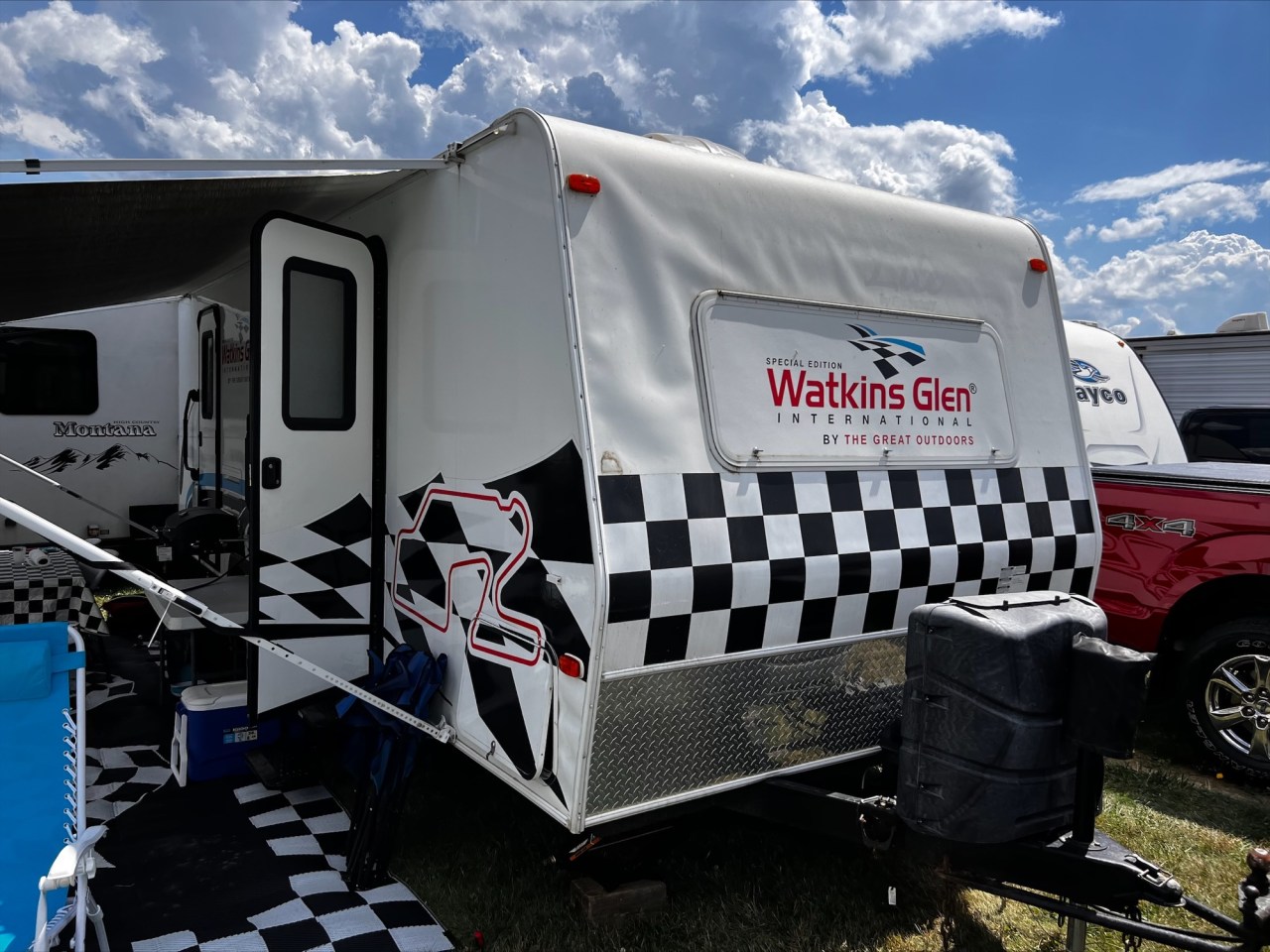 DIX, NY (WETM) – If you’ve walked around the infield of the Watkins Glen International track during NASCAR weekend, you’ll see campers of all shapes and sizes. A motorhome hidden behind other trailers is very special and literally one of a kind.

The camper is a take away caravan, not too long but adorned with ‘Special Edition Watkins Glen International by The Great Outdoors’ on the sides and written in checkered livery on both sides of the trailer.

The owner, Walter Gunn, came out of the trailer. Gunn was lucky enough to win the trailer back in 2015 as part of a competition with Watkins Glen and The Great Outdoors.

“Everyone, even myself, always says, ‘Nobody wins these things, you’re not going to win, don’t do it,'” Gunn said when asked about the competition he entered to win the camper. “My wife Jodie says, look, it won’t hurt, put it in, and who knows, maybe you win,” he said, “I fill it in, just my name, just my phone number, put it in a box and go away,” he said.

Little did he know that later that day he would receive a call from The Great Outdoors saying he was a finalist for a chance to win the trailer. At first he thought it was a hoax, but he was persuaded enough to come to the location where the competition was held and he was officially registered as the sixth and final finalist for the trailer raffle.

Before Sunday’s NASCAR race in 2015, the finalists were brought onto a stage and names were drawn.

The camper has been everywhere and receives all kinds of attention. They’ve taken it to several different races and made hundreds of friends through their trips to different states.

The couple claim thousands have been to the trailer over the years to check it out, and they explain that it’s even been customized inside with checkered racing gear. The quilt on the bed has a plaid pattern along with a plaid pillow, a large plaid floor covering was given to them along with a grill, TV and radio with NASCAR radio link.

For Walter and Jodie, the trailer was more than just a prize, it was a sign of hope. Walter was heavily involved with cancer treatment in 2015 when he won the trailer, and explained that winning gave him strength and hope to keep going.

“I had to be taken over by a wagon, got on stage, didn’t feel in any way that it was going to be me who won, I won and quite honestly gave me a big reason to keep breathing,” he said Gunn when he talks about his illness. “I personally feel like if I hadn’t won I wouldn’t be here today,” he said, “I wouldn’t be alive, I wouldn’t be who I am, we’ve suffered a lot in our lives in the past, but honestly since we won it’s been a boost for me and my wife in particular who I know well and it gets us here and keeps us going,” he said.

The couple have been coming to WGI for well over 20 years and have the same campground, originally from the Coudersport area, the couple are enjoying the time they have spent at Watkins Glen International and even more so since winning the trailer.

COVID-19 deaths fall nationwide, however climbing in states like NY

BUNTLINE Hitch, a termination knot to connect a carabiner

Inside Division to Part Out Single-Use Plastic on Federal Lands by...