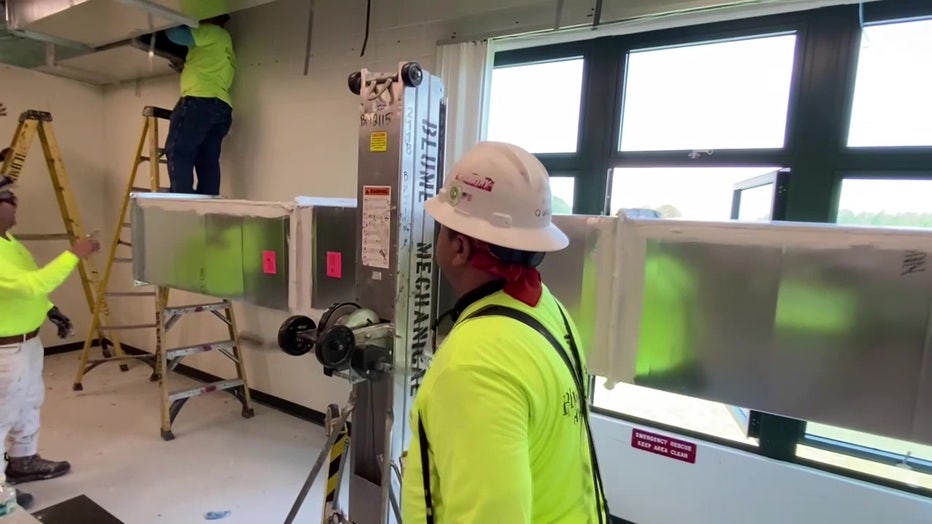 Tampa, Fla. – As major repairs and renovations began at 20 Hillsborough County schools this summer, the district looked for ways to “get creative,” with construction costs skyrocketing due to inflation.

During a tour of Lutz’s Bob Martinez Middle School, which is among 20 schools to receive new air conditioning this summer, Superintendent Addison Davis discussed the challenges the district faces in planning future projects.

“We see inflation everywhere,” Davis said. “So we’re having important conversations with vendors to be strategic and rethink our budget in terms of what we can and can’t do, and we really need to go back and see what’s our top priority.”

Infrastructure projects, including work at Martinez Middle School, will be funded from proceeds raised by the 2018 voter-approved half-cent education referendum tax. Davis said the district has spent about $355 million to date and has completed hundreds of projects in 80 schools.

The district has already planned major renovations and repairs at 80 additional schools during the remaining six years that the tax is expected to be in effect. However, as construction costs skyrocket, district leaders have to make adjustments.

“We’re literally saying, internally and with an external third party, ‘Hey, what’s the prioritization? What’s the most important project that we need to do?’ Compare those and say, “All right, these are schools that we’re going to meet,” said Chris Farkas, the district’s chief operating officer.

Farkas and Davis said things like new air conditioning and school security improvements will always be a priority. But the district may need to find projects to postpone until costs begin to come down.

The district is also concerned about how much more it will cost to build the 15 new schools over the next 18 years, which is Superintendent Davis’ plan.

According to the US Bureau of Labor Statistics, building material costs have increased about 20 percent in the last year.

“It [costs] like $30 to $40 million more to build [schools] than three or four years ago,” Davis said. “This is worrying. If it keeps up this pace, it’s going to be a tough time to hit anything [our goals] and create all the student stations we need, especially in South County.”

The borough leaders are also asking voters to approve a one-million increase that would increase homeowners’ property taxes based on the value of their homes. This money would be used entirely for employee salaries.

Classes Realized from a Setback on the Crag