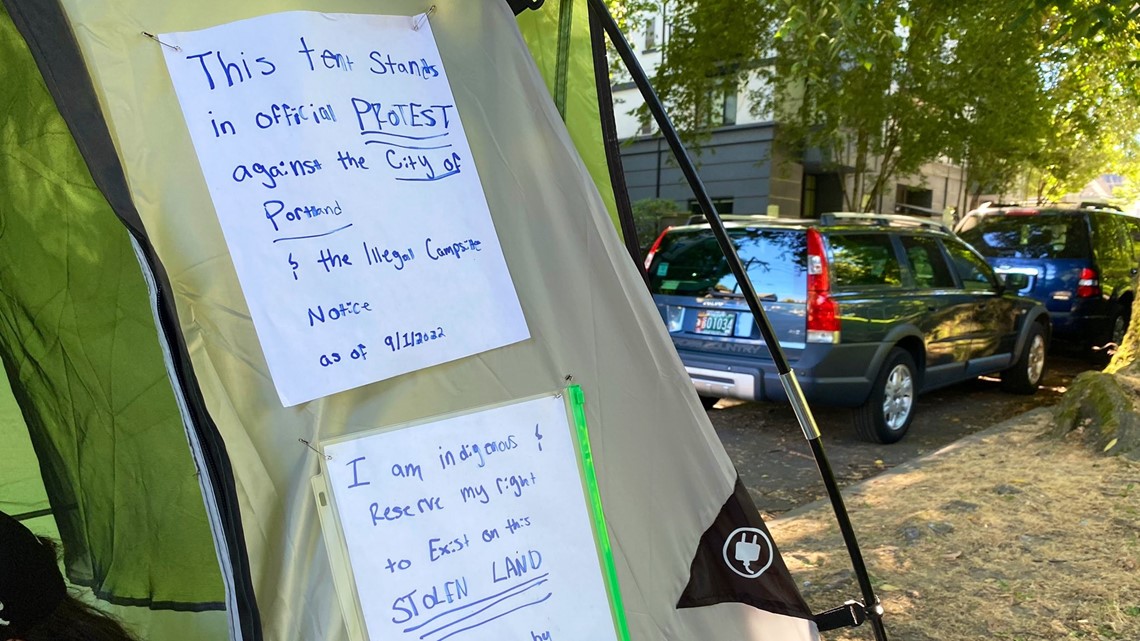 PORTLAND, Oregon — Tents and piles of trash blanketed the streets around the Metropolitan Learning Center in northwest Portland Sunday morning. While children were playing in the schoolyard about 30 meters away, police responded to reports of a man who had just overdosed on fentanyl.

Shortly thereafter, sobs and screams echoed from the nearby homeless camp on Northwest Hoyt Street as the campers there learned their friend had just passed away.

This area near the Metropolitan Learning Center is one of many where Mayor Ted Wheeler banned homeless camps about two weeks ago, part of a declaration of emergency aimed at keeping the camps away from schools and children.

However, many of the campers in the area have told KGW that despite the city’s order, they have no intention of leaving the site.

“I’m just keeping my tent here as a protest,” said Joseph Reandeau, whose tent is on the corner of Northwest Hoyt and 19th Avenue. It was given up for removal on September 1 because it is only 50 meters from a school.

“It said this is an illegal campground and there’s a lot of shelters that you can go to,” Reandeau said, but they insisted they’d rather stay on the street than in a shelter.

HOMELESS CAMPS & SCHOOLS | This is the sidewalk at the Metropolitan Learning Center in NW. It’s one of the routes the city recently banned from homeless camps, but many of those who live here tell us they have no plans to leave the area, despite city orders. @KGWNews pic.twitter.com/yhuKeKyxBK

RELATED: Uncommitted: How High Standards Drive a Cycle That Fails Those with Serious Mental Illness

“I don’t feel very safe staying there because some of the people who live there make me and my partner uncomfortable, so we’d rather stay in a tent,” Reandeau said, referring to the accommodation that’s in the Emission of the city is indicated.

They said they are currently on a waiting list for a housing voucher. Until then, they plan to stay on Northwest Hoyt Street, despite city orders.

“I could pitch my tent today if I wanted to, but it’s more of a moral thing – I want to protest for a few days. I believe that our city and our government should give us more resources,” they said.

For other homeless people on the street, the camping ban is confusing.

Camps along this strip were advertised for removal on September 1st, but we are told that people simply tore down the city signs.

This tent now stands on the corner of NW Hoyt and 19th in protest.

“I believe our city should give us more resources.” @KGWNews pic.twitter.com/h68LuK1QxD

RELATED: Regional housing efforts are moving more than 1,600 people off the streets into housing

“They keep saying they’re going to clean it up, and it’s still here – all the junk, I mean. It’s been weeks,” said Michelle Scott, who lives across the street from the Metropolitan Learning Center. She walks around the neighborhood five times a day.

Scott said she’s trying to end her lease because of the camps.

“They run around peeing and pooping wherever they want, they have their pants down. I don’t understand how they can have that around children.”

She said campgrounds have gotten worse since the start of the school year, despite city crews trying to move them.

“They’ve come in a couple of times to sort it out and an hour and a half later we have just as many, if not more,” she said.

“It’s just a huge thing to address,” added Heather Begaetz, who visits the Metropolitan Learning Center’s playground with her daughter. “How do we deal with it humanely? If the city just sweeps, it kind of just pushes people away without really addressing the core problem.”

RELATED: Formerly homeless Portlanders volunteer with organizations to help others get off the streets

Take Your Storage Pegboard Wall to the Subsequent Stage

‘A story of two outside’: Merrell research examines inclusivity in outside...