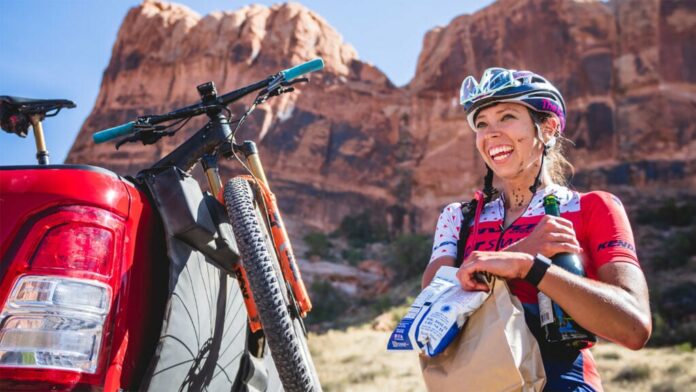 Otto’s time is based on this Strava segment, which is a loop that begins in Moab and ends just outside of town where the famed Porcupine Rim singletrack brings riders to the Colorado River.

The Whole Enchilada loop is 55.27 miles and includes 8,011 feet of climbing and nearly as much descending. Over half of the route is on paved and dirt roads, including the climb up the La Sal Loop Road to the start of the famed ‘Whole Enchilada’ singletrack at 11,146 feet of elevation.

Most riders get a vehicle shuttle to the high point at Burro Pass and descend the MTB portion of the route, passing through multiple ecosystems, from subalpine to the desert, on rocky exposed terrain.

Otto said that part of her motivation in going for a fastest known time on the loop, versus just the descent, was to normalize the entire route and encourage others to ride it.

Otto completed the FKT in 5:50:38, knocking the previous record of 6:47 well into second place. Her time is the best of any rider, male or female.

The Gear Our Editors Cherished in July