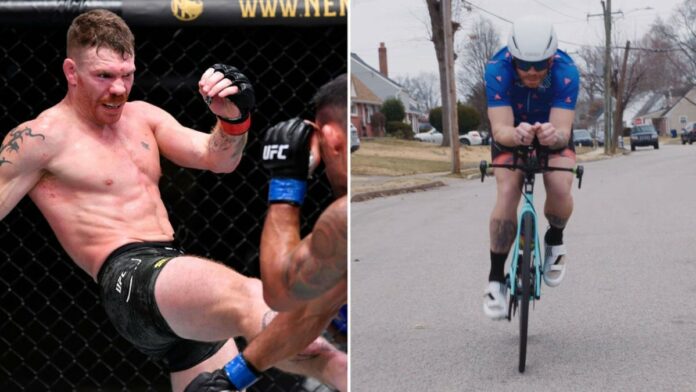 As Paul Felder prepares for 70.3 Atlantic City on September 10, he’s not just using the event as a farewell to the half distance before jumping to full Ironman in 2023. Felder, a former top-ten ranked fighter in mixed martial arts, says he simply loves a challenge.

“I may do it a couple times just to do it, because I like the half distance,” he said. “I think 70.3 is just long enough where it is a war of attrition as well as a speed game.”

Felder is familiar with wars of attrition. For nearly a decade, he competed as a professional mixed martial artist—the last six-plus years spent at the height of the sport in the Ultimate Fighting Championship (UFC). Felder built a reputation as not just one of the best lightweights (155 pounds) in the world, but one of the most exciting.

But when it was all over and Felder officially announced his retirement in May 2021, he needed to fill that competitive void. He found it in triathlon, which he had already started dabbling in before his final fight against Rafael Dos Anjos in November 2020. “Dabbling” may be the wrong word, since Felder is unsurprisingly all-in on everything he does.

“When I first started, I wanted to have something that was just kind of fun to do in between MMA training and something that was going to keep me a little bit fitter in life,” he said. “Then I stumbled upon triathlons, and I was like, I’ll do this for fun. And then like anything, since I had a bit of pro sports experience, guys took me under their wing and would chat with me, and I just got sucked into the culture of it. And these guys are way more badass than people give them credit for. The s*** they’re doing is grueling. It’s brutal.”

The 38-year-old Felder is now a committed triathlete himself, and he also commentates on UFC events, and acts (he recently appeared on HBO’s Hacks), in addition to spending family time with his girlfriend and their two kids. And while nothing is easy about triathlon training, there is one benefit to having hung up the gloves.

“The difference off the bat is the impact,” Felder said. “Your armor has to be different in MMA. You’re conditioning for damage and your durability has to be locked in. You might not have the same gas tank as a triathlete, but your ability to grind and push through circumstances for survival purposes, it’s a whole different level of cardio when a guy’s trying to choke you out versus me trying to run this mile really hard.”

While fighting, Felder would only run three days a week, which was supplemented by three days of sparring and grappling practice. Today, a typical day might see him focus on his running, followed the next day by a visit to the pool, and, of course, bike work. None of which includes getting punched, kicked or choked.

And though swimming was an early issue, once he hit the Ironman 70.3 course in Virginia in June, he was a natural, finishing in 5:27:26, good enough for 135th overall and 23rd in his age group. He’s continued to improve in each of the four 70.3s he’s raced since, and he’s hoping to PR in Atlantic City this month.

“I want to do 29 to 32 minutes on the swim, bike right around two hours, maybe 2:05. And I gotta hit at least 1:28 for the run,” said Felder, who is coached by David Tilbury-Davis, who also coaches Felder’s inspiration and training buddy Lionel Sanders. “I raced this race last year and this is always one of my ‘A’ races because it’s close, it’s flat, it’s in Atlantic City, I fought there so many times, and it’s easy for me to go and do. My PR is 4:42 for a half, so I’d definitely like to get sub 4:30 for AC. And if I want to come close to the top five, I’m gonna probably have to do that even closer to 4:12-4:15, which might be a bit pushing it, but f*** it. If you don’t have a crazy goal, why am I even doing this stuff?”

“I like that feeling of overcoming stuff and I’ve always preached that,” he said. “As a fighter, you’ve got to just dig your feet into the ground sometimes and go for it. And that’s how I am with this sport. If I quit, everything I’ve ever talked about is just BS. Sometimes it’s really scary and it really sucks, but you’ve got to persevere.”

A Look At Felder’s Training

“Monday, Wednesday, and Friday in [MMA] camp I would do a very specific lifting program with my coach—lots of Olympic lifts combined with explosive movements,” Felder said. “Deadlifts straight to box jumps or broad jumps.

“On Fridays, we would do a circuit focusing on high levels of intensity—30 second, one-minute bursts of ball slams, farmer’s carries, sprints, and lots of sled pushes. Sometimes we would mix in pad work with these workouts, as well.

“On Tuesdays, Thursdays, and weekends I would swim or run. On Saturday, I would do a hard treadmill sprint interval with lots of uphill work. Mixed in with this would be all of our MMA work.”

Uvalde households proceed tenting out at district workplace as they demand...

MacNeill Pleasure Group Appoints CEO and Board of Administrators to Bolster...

You Can Really Go Tenting In Alberta Yr-Spherical & These Are...

Out of doors recreation stays well-liked and may also help present...

Outside fans have fun “Pressure of July” in La Crosse’s Higher...

This Viral Avalanche Video Is Far Too Shut for Consolation

Tenting bookings up 500% as UK campsites promote out for summer...