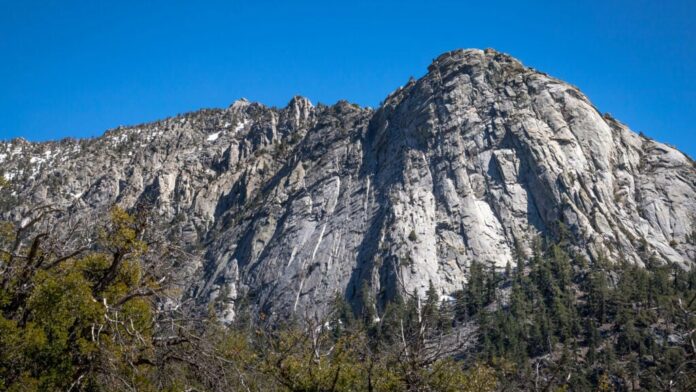 On Saturday, October 22, officials responded to a call for help from two climbers stranded in a storm high on Tahquitz’s five-pitch climbing route Northeast Face West (5.7). In late September two climbers died when an anchor sling broke while they were attempting to rappel after a sudden thunderstorm hit Tahquitz. In 2003, two climbers were killed at Tahquitz when an anchor failed.

RMRU member James Eckhardt was enjoying an evening at home recalling a hike earlier in the day when he had watched clouds blow in and remarked to a friend that “chances of a rescue [at Tahquitz] would be high later in the day due to the storm.”

Sure enough at 9:30 P.M. the call for help came in. “I immediately knew the climbers were in a dire situation due to the storm,” wore Eckhardt in his RMRU accident report, “so I grabbed my technical gear and headed [to Tahquitz].”

At the Tahquitz parking area, Eckhardt was greeted with rain, fog, wind, and cold. He and fellow RMRU members Donny Goetz and Caleb Milner radioed the stranded climbers, who had fortunately packed handheld radios, and told them that rappelling would be the quickest route to help, as having the RMRU team hike to the top of Tahquitz and rappel in would take substantial time. The RMRU team began the hike to the base of the stranded-climbers’s route while the climbers began rappelling, but soon radioed that they were too cold to continue.

Realizing that the rescue would now take more than the three of them, the RMRU team requested help from other mountain rescue teams in Southern California.

Carrying 600 feet of rope and gear, Eckhardt, Goetz and Milner scrambled up the north gully descent where Eckhardt rappelled 600 feet on three ropes to a point where he could see the climbers, although they were still 100 feet away and he was out of rope. Eckhardt assessed the climbers from his position, noting that they were “mildly to moderately hypothermic.”

Milner then rappelled on the first rope, pulled it and rappelled with it to Eckhardt, who used the rope to rappel to the climbers. Reaching the first climber, Eckhardt gave her hot chocolate and a belay parka. Milner then rappelled to the second climber who was lower on the face. Eckhardt next lowered the climber with him, and with Milner lowered the two climbers to the ground to awaiting Cal Fire team members, who bundled them in sleeping bags with hot water bottles. Air Rescue 5 from the LA Sheriff’s department hoisted the climbers around 9:00 A.M. and flew them to the hospital where they were treated for hypothermia.

This Tahquitz rescue illustrates the complexity, risk and effort required to pull two incapacitated climbers off a multi-pitch wall. It also raises the question of why Tahquitz has seen two rescues by RMRU in as many months, the first involving two fatalities but both precipitated by stormy weather.

“Tahquitz is a very popular climbing area due to the proximity to large population centers and moderate ease of access,” says Eckhardt. “As such, a wide array of climbers visit from folks on their first multi-pitch to very seasoned climbers. Just given the number of people on the rock, chances are there will be climbers less prepared for mountain weather. That being said, I think the ease of access and generally predictable sunny Southern California weather makes it easier to let your guard down than if you were on the same length of route in the Sierra or another backcountry destination. The grading at Tahquitz, along with the skills and techniques needed to efficiently navigate, climb and safely bail on routes up to 800 feet, coupled with the easy access can catch climbers off guard when things start to go wrong. This summer, an unusually active monsoon season contributed to a number of storms and heavy rainfall in Idyllwild. It was abundantly clear that the weather on Tahquitz can be just as bad as any other alpine crag.”

How can climbers avoid such a situation on Tahquitz and other mountains?

“The first obvious piece of advice,” says Eckhardt, “is for climbers to check the weather and think about gear (insulation, rain protection, etc) as they might on any other alpine objective. Secondly, as with any long multi-pitch, whether an easy or difficult grade, it’s important to understand the terrain and preplan potential options for retreating if the need arises. Just as importantly is knowing how to efficiently bail. Retreating from a route is a skill set in itself. Climbers should practice how to retreat from a route at their local crag before heading into the backcountry. I recommend reading Andy Kirkpatrick’s Down for some great information on this.”

Outside Photographer Ted Hesser Opens Up About His Battle with Despair

New York to obtain $14 million for toursim, outside recreation

Climbing on the Tokyo Olympics: When it begins, methods to watch,...

Examined: How A lot Slower Are Loafer Bikes For Climbing?

U.S. Division of Commerce invests $2.5 Million to spice up tourism...

Fuel costs have an effect on outside recreation for some, no...