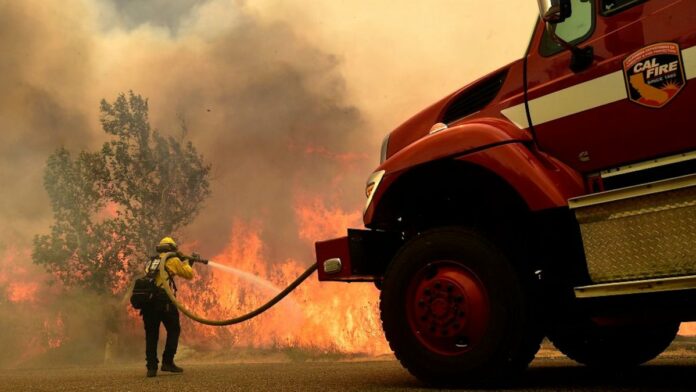 This week, Yellowstone officially reduced its fire danger from “high” to “moderate” and Rocky Mountain began to close park roads due to snow. It’s safe to say that this year’s fire season is coming to a close. What began with the driest January and February in California’s recorded history and early season flare-ups in New Mexico ended with lower-than-expected impacts to Park Service lands, a testament to recent prescribed burns and drastic efforts taken to preserve the country’s remaining giant sequoia trees.

Of course, with the western United States experiencing its worst megadrought in 1,200 years, many of our public lands did not come out unscathed, and park officials are worried about the ever-shifting future of America’s Best Idea. Unseasonably dry forestlands in northern New Mexico helped strengthen a series of massive blazes in April, the largest in the state’s history, and forced May closures of Bandelier National Monument and Valles Caldera National Preserve. In July, the Washburn Fire in California made headlines as it tore across the southernmost swath of Yosemite National Park, threatening the Mariposa Grove of Giant Sequoias and prompting evacuations in the nearby community of Wawona. An August flare-up in Michigan’s Isle Royale brought trail and campground closures to areas surrounding the Greenstone Ridge Trail, the park’s premier overnight trek.

“It’s just a powder keg out here,” said Cicely Muldoon, superintendent of Yosemite National Park. “Fire season isn’t really a term that matters much anymore, as fires can happen at any time. With our 40 percent of normal snowpack conditions, it’s just dry and ready to burn.”

Garrett Dickman, a forest ecologist at Yosemite, said that this year was a continuum of a trend that’s been accelerating for the last several years. In 2021, the U.S. saw its first two fires—the Dixie and the Caldor—in recorded history jump across the Sierra Nevada. Sixty-nine percent of Lassen Volcanic’s total land was burned by Dixie, while the Eldorado National Forest was severely scarred by Caldor. The Caldwell Fire of 2020 singed 70 percent of Lava Beds National Monument. But these percentages pale in comparison to the Carr Fire of 2018, which burned 97 percent of Whiskeytown National Recreation Area, making it the most destructive wildfire in NPS history, in terms of infrastructure loss and proportion of land affected.

“In two years, we’ve lost 20 percent of all giant sequoias on Earth in high-severity fire,” said Dickman, adding that in the previous 2,000 years, the planet likely only lost a few hundred of the ancient trees. “It’s the severity of the fires and the impacts of these fires that are off the charts. There’s nothing even closely similar to what’s been happening these past few years.”

Nydick explained that the Cameron Peak and East Troublesome Fires of 2020 burned through Thanksgiving before reaching 100-percent containment, much later than what is typically thought of as prime season. They have since been recorded as the largest and second-largest blazes in Colorado history, burning over 400,000 acres in total.

With climate change impacts, fuel buildup from 100 years of fire suppression, and the loss of Indigenous cultural burning, wildfires have grown to a scale and intensity that kills virtually every tree and seed that forests desperately need to regenerate on their own. This, coupled with years of historic drought across the American West has caused some scientists to begin modeling a drastic shift from conifer-dominated landscapes to shrub-dominated landscapes, explained Brian Kittler, vice president of forest restoration at American Forests, a nonprofit organization that works with land management agencies and Tribal nations to develop forest restoration strategies. Such a change might mean that repeated, high-severity fires become a more regular occurrence as we lose larger, more fire-resilient trees.

“This year, at mid-summer, seasonal drought exists across over 70 percent of the western half of the country,” Kittler told Outside in mid-August. “In California right now, parts of the Central and Southern Sierras are at, or close to, all-time record low for live and dead fuel moisture.”

The National Park Service’s current policy for wildfire suppression is to put out any fire that is not naturally occurring, or, in other words, is man-made. According to Muldoon, when lightning strikes a new flare-up, the NPS typically assesses the current weather patterns, potential to impact visitors and communities, and proximity to recent fire footprints before deploying staff and putting firefighters in danger. “We actively manage every fire that’s out there,” she said. “What we try to do is manage them in the most appropriate way.”

A bill introduced in the U.S. House of Representatives in March aimed to alter this decades-long strategy, calling for immediate suppression of any fire burning on U.S. Forest Service land within 24 hours, neglecting the location and cause of the fires. The bill has not yet been put to a vote.

Still, the shift of fire seasonality from a summer and early fall stressor to a year-round mission is putting a strain on first responders that they’ve never before encountered. “Our firefighters, they work long hours, sometimes 16 hours a day for 14 days in a row,” said Shawn Nagle, a veteran wildland firefighter and the Acting Fire Director for the NPS. “Some of our firefighters and first responders have unfortunately taken steps such as suicide, and it’s just tough,” he said.

With a recent sea change of political interest in understanding the threat of wildland fire, large pools of funding are beginning to find their way to the NPS so that it can adequately support men and women on the front lines and protect treasured cultural and natural resources. Roughly $1.5 billion dollars from the Bipartisan Infrastructure Law is going directly to the Department of the Interior, according to Mike Reynolds, deputy director of the NPS. Of that money, $255 million will go directly to science, technology, and training for employees. “What I’m excited about is workforce reforms to help us with the mental and physical health of firefighters,” he said.

In addition, $325 million will go towards the Burned Area Emergency Response program, which helps support an affected park’s ecosystem and infrastructure after a fire, and $878 million will fund projects that manage fuel loads to mitigate fire risks for vulnerable areas.

The Inflation Reduction Act, signed into law on August 16, provides even more funding for the NPS and the Bureau of Land Management. Under this new legislation, $250 million will go towards habitat restoration programs, another $250 million will aid conservation and public lands resiliency projects, and $500 million is being designated to help the NPS address longstanding staffing issues. “The exciting part is continuing to increase pay and permanency for our firefighters,” said Reynolds. As firefighting becomes a more year-round profession, the Interior Department plans to convert 1,000 men and women to permanent staff in the next year.

Our cultural story is going to have to change as well, as fires continue to alter historic vistas within the national parks, according to Nagle. “Our visitors see the historic pictures,” he said, “and they might see a little bit more black on the ground than their forefathers and foremothers saw when they visited Sequoia and Kings.”

As public lands managers continue to see the impacts of high-intensity fires across the parks, the narrative seems to be shifting from one of shock to one of grim acceptance. Nagle explained that changing the way they talk about fire in the park service will hopefully benefit the mental health of visitors who might be in for a surprise. “It’s a bummer I’m not seeing what my dad saw at Sequoia and Kings 40 years ago, but guess what, this is a new stage. This is something that my kids may see or not see,” he said.

This Reward Information from DICK’S Sporting Items Has Every part Dad...

Free occasions scheduled to have a good time July as Nationwide...