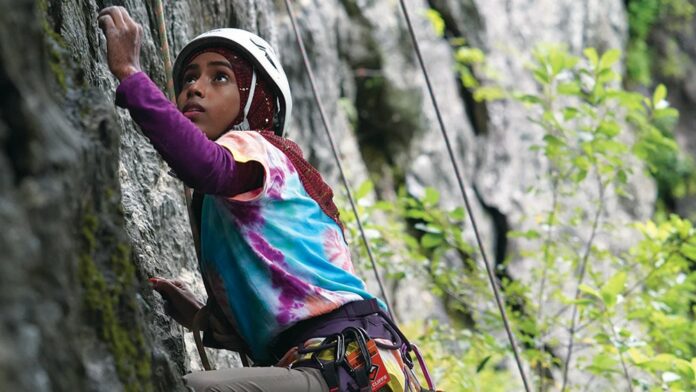 Marjana Tafader peers down at her feet, her coral-and-magenta-patterned hijab tucked neatly beneath her face mask. The young climber’s fingers dance as she reaches slowly and carefully upward with her left hand, seeking the next hold.

The Cliffs at LIC climbing gym in Long Island City, New York, is bustling with laughter, shouts, and movement. But here, Krauss, Marjana, and the rest of the Young Women Who Crush (YWWC) climbers seem to hear and see no one but each other. Support is the name of the game in YWWC, a mentorship and climbing program in New York City for high school girls and gender-expansive youth. Founded in October 2017 by Krauss, Emily Varisco, and Eva Kalea, YWWC is now in its fifth year of operation. Before COVID-19 hit, YWCC met every month and organized many outdoor trips, many of them to the Shawangunks, a two-hour drive north of New York City; these were the first outdoor experiences for many of the girls. Participants range in age from 16 to 23, with most of them coming from the same high school, Central Park East in Manhattan.

“You’re so in control when you’re climbing,” Emanoella Ceni, 16 at the time of this scene and now 18, says excitedly to Marjana, a returning college student, now 23, after practice. Emanoella sits cross-legged on the gym mats, her back perfectly straight. At the end of every session, the girls sit in a circle on the gym’s mats to “debrief” and discuss the climbing and any feelings that may have come up. Today, 13 girls attend.

“It inspires me to climb that way, too,” Emanoella says, “to be more controlled with my movement.”

Marjana’s mask hides her face, but her reaction is clear: a full-body wriggle, followed by “Awww.”

The girls around them clap in approval, and laughter fills the space. Only a brief silence ensues before someone interjects, “Guess who got into Cornell?!”—which prompts a round of hoots and applause as another young woman, Jamaya Scott, clasps her hands in acknowledgment and gratitude.

Krauss begins to speak, and the girls immediately hush.

“It’s time for a rose and a thorn from the day,” she says. “Let’s share a joyful moment and a difficult moment from our session.”

One by one, the girls share thoughtful anecdotes and feelings, some only offering roses, some only thorns, but everyone says something. When one of the girls expresses frustration at being out of shape, the rest offer encouragement.

“We’re all out of shape!” someone shouts.

When Emanoella shares that today she fell on her first lead, the group erupts in playful celebration.

The aim of YWWC is safe learning and a sense of belonging. As interest in climbing has increased exponentially in the past decade, in part due to a spike in the number of climbing gyms, so has the presence of various climbing-affinity groups, with more and more people from different backgrounds and identities entering and navigating the climbing community and outdoor industry.

According to the Outdoor Industry Association, in 2017, climbing gyms were reporting an average of 100 new members a month, and in 2019, 4.4 percent of all Americans climbed in gyms with some sort of regularity. The pandemic barely dented this uptick in gym popularity: in 2020, 44 new gyms opened in the United States, which was more than in 2019, according to Climbing Business Journal.

Affinity groups have arisen across the United States to address issues of diversity and inclusion from all experiences. Adaptive Climbers Group, Stonewall Climbing, Brown Girls Climb, Asian Bouldering Crew, Indigenous Womxn Climb, Belay for All, Try Hard Crew, Sending in Color, and Black Girls Boulder are just a sample of the many groups that aim to diversify the climbing community and foster mentorship and community. Events like the annual Color the Crag at the boulders of Horse Pens 40 in Alabama, which started in 2017, and the Women’s Climbing Festival in Bishop, California, first held in 2016, have likewise boosted visibility and support for affinity spaces.

As Atongular Monique of Rockaway Beach, Long Island, a volunteer and mentor with YWWC and co-founder of the women’s climbing group Try Hard Crew, says, “Having those spaces where people look like you physically or who are in similar circumstances makes a big difference.”

Monique, 44, grew up near the popular surfing venue of Rockaway Beach but only learned to surf in her thirties. She is now the community outreach and partnerships coordinator for the Laru Beya Collective, a nonprofit organization in the Rockaways that recruits Black and Brown youth and teaches them how to surf.

“I want [people of color] to know they have access also,” Monique says.

Alexis Krauss, 37, co-founder of YWWC and a New Jersey native, climbed for the first time in 2014, when some friends took her out to Mount Diablo in California. “I cried literal tears of joy at the top of my first outdoor route,” she says. After that, she was determined to learn everything she could about rock climbing.

In her professional life, Krauss is the front woman of the noise-pop music duo Sleigh Bells. She is also an AMGA-certified guide. To the girls of YWWC, she is a friend and mentor.

Her co-founder Emily Varisco, 37, originally of Estes Park, Colorado, and now of Eugene, Oregon, has been climbing for 22 years and coaching for 16. She grew up being one of the only girls at the crag, so in 2017, when she took four of her youth-team girls from the Cliffs, where she was head coach for four years, to the Red River Gorge in Kentucky, she couldn’t believe how different their shared experience seemed from her own.

After the trip, Varisco approached Eva Kalea, her then-colleague at the Cliffs, about starting a mentorship program for high school girls. Kalea, 35, and Krauss had just run a busy women’s climbing event called Women Who Crush. The three sat down to brainstorm and decided to put together a meetup for high school girls. Young Women Who Crush was born.

On October 16, 2017, 16 girls who had been recruited from Central Park East High School gathered with a handful of mentors at the Cliffs to climb for the first time. They spent the first hour learning safety and communication skills, and then they took to the walls. At the end of the two hours, says Krauss, “We closed with a circle where we discussed the things we loved and the things that challenged us about the experience,” a precursor to the rose-and-thorn exercise. The founders were surprised at the girls’ enthusiasm and receptivity to each other when many were just meeting for the first time, even though they attended the same high school.

“Initially, we didn’t think of YWWC as a ‘program’ but as a one-off opportunity,” Krauss continues. “[But] immediately after that first session, we all knew it was something we needed to keep organizing.”

At the time, Krauss was a guide for Discover Outdoors (DO), a New York–based foundation aiming to get urban youth outside and teach them outdoor and leadership skills. Discover Outdoors came on as an informal support network for YWWC and helped the new group recruit girls and gender-expansive youth. YWWC was able to use the group’s insurance and even the DO van for outdoor trips. Then, in 2018, due to financial troubles and internal mismanagement, DO and the Discover Outdoors Foundation (DOF) abruptly ceased operations.

“We were entirely supported by DOF, so it was a devastating blow,” Krauss says. “We really had to scramble.”

After months of uncertainty, YWWC found support from the Bronx-based adventure nonprofit Catrock Ventures, a group Krauss knew from her time with DOF. Catrock both supported YWWC and the founders’ need to maintain autonomy.

Over the next year, the founders were able to provide the girls a pathway to climb. It then became important to create ways and opportunities for them to continue climbing. Free gym memberships had been a first step, but staff also helped some mentees find climbing-related jobs and encouraged them to come back to YWWC as mentors themselves. The founders could see that many of the skills the young women learned, like empathetic communication and how to be an effective leader, extended beyond climbing.

Kalea writes in an email that the program was intended to “provide opportunities for youth to experience the mental, physical, and emotional benefits of climbing when they otherwise may not have had a chance to,” in a diverse and supportive environment and with an eye toward their futures in the outdoor community and in general.

She says, “We are very focused on giving them life and leadership skills that they can carry with them.”

Young Women Who Crush is a part of a nationwide movement to lower the barriers to entry in climbing and to redefine what it means to be a climber. We talked to some of the members about what climbing means to them.

Is There A Future For Outside Recreation? Congressman Neguse Hopes So

COVID-19 deaths fall nationwide, however climbing in states like NY

Outside recreation displaying indicators of restoration in New Mexico

He used to promote medication in southern Dallas. Now he hooks...