Denver is planning something of a replacement after losing the nation’s largest gathering for the outdoor industry.

Called Big Gear Show, it promises to showcase the latest and greatest in hiking, cycling, camping, climbing and boating, and to combine with (e)revolution, which brings together e-bike manufacturers, retailers and riders .

The two shows are poised to converge this summer at the Colorado Convention Center for what organizers are calling the first event of its kind open to a general audience. Two days in June are dedicated to the specialist trade, the next two days are called “Consumer Festival”.

That’s unlike Outdoor Retailer, which has reserved the venue for businesses, nonprofits and media for the past five years. The show returns to Salt Lake City in 2023.

When we envisioned the Big Gear Show in 2020, “we envisioned it taking place in an accessible location in the city center that would include both product demonstrations and consumer engagement,” said the show’s director, Kenji Haroutunian, in a press release. “Now our original vision has been realized.”

Conor Hall, director of the Outdoor Recreation Industry Office in Colorado, said his vision is also being realized. Following Outdoor Retailer’s announcement earlier this year that it was leaving the state, he expressed hopes for a more “consumer-centric” show. (Upon arrival in 2018, the biannual show claimed to draw 85,000 people and generate more than $100 million in local economic impact.) 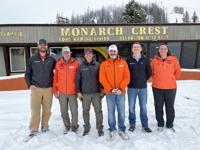 In the press release, Hall called the Big Gear Show and the (e)revolution concept “pioneering” and important “in our effort to ensure that Colorado is a national leader in outdoor recreation and remains the meeting place for the industry.”

Scheduled for four days from June 8th, the timing might be daring. That’s less than two weeks ahead of Outdoor Retailer.

“We know that early June is a busy time for the industry,” Haroutunian said. “But we believe there is no better time than June to rally the industry and kickstart the outdoor industry’s summer recovery season.”

Colorado Parks and Wildlife gives $150 million in grants for city...

Why this Well-liked Denver Beer is Made with Climbing Chalk