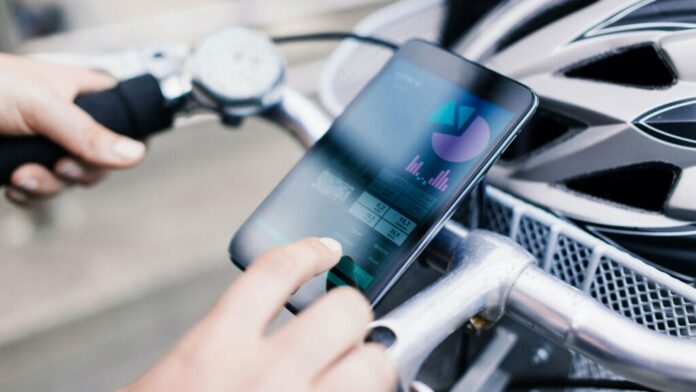 I do my best to resist conspiracy theories. For example, I don’t go around saying that the Earth is flat. Sure, if it really was round you’d expect cycling to be much easier since you’d always be going downhill just a tiny bit, but I’ll go ahead and give the “scientists” the benefit of the doubt so I don’t get shunned by “society.”

However, there is one conspiracy I do submit to, which is that the cycling industry, Big Tech, Big Oil, and the Lithium Ion Battery Industrial Complex are working together to completely destroy the bicycle as we know it and usher in a dystopian era for cycling. I also suspect that actor Steve Guttenberg (remember him?) may be involved. Granted, that last thing is more of a “gutt” feeling (see what I did there?), but I think I’m on pretty solid (and flat!) ground as far as the other stuff goes.

Since the advent of the safety bicycle in the late 19th century, we cyclists have enjoyed a steady stream of refinements: derailleurs allowed us to shift easily and quickly, aluminum rims weighed less and yielded better braking, clincher tires meant we didn’t have to glue them onto the rim and get stuck to the cat in the process. The bicycle finally reached its apotheosis in the 1980s, an era in which you could purchase a wide array of lightweight and ultra-refined yet profoundly durable high-performance bicycles that perform at least as well as any bike today. Consider: Greg LeMond’s 1989 Tour de France time trial from Versailles to Paris is still the second-fastest in history, and innumerable 1980s road and mountain bikes are still in regular use with many of their original components.

Unfortunately, in 1984 (naturally), two Orwellian things happened that forever altered the course of cycling technology compatibility, which put us on a collision course with destiny. The first was Shimano’s new Dura Ace component group, which featured their then-new S.I.S. (Shimano Indexed Shifting) technology. Instead of dialing in a shift, you just moved the lever until it clicked, and before long this became the standard mode of operation for bicycle transmissions. But indexed shifting didn’t liberate cyclists; it imprisoned them. No longer could you mix and match drivetrain components from different manufacturers. In the days of friction shifting, your shifters and your derailleurs didn’t care how many cogs you had or which company made your freewheel—you could use whatever gears fit on your bike. With index shifting, bicycle transmissions were a closed system–you used seven speed only with seven speed, Shimano only with Shimano, Campagnolo only with Campagnolo, and so forth. The carefree days of using whatever with whatever ended with a single click.

As for the second Orwellian thing that happened in 1984, it was the release of the movie Police Academy, starring…Steve Guttenberg. Coincidence? I submit that there’s no such thing.

From there, it only got worse. The shifters became integrated with the brake levers, resulting in even less compatibility, and therefore less freedom. “Wheel systems” made from proprietary components and integrated headsets and bottom brackets followed. On the dirt side of things, simple, versatile mountain bikes evolved into human-powered motocross bikes, with complex suspension systems, and of course hydraulic disc brakes, which invariably made their way onto road bikes too. Everything was now made from carbon fiber, which is basically petroleum. In fact, between your petroleum frame and your petroleum brakes (both mineral oil and DOT 4 fluid are also derived from the stuff) you’re basically riding around on a giant ball of oil. (H/T to Kramerica Industries.) You also can’t even ride your bike without plugging it in first, thanks to your electronic drivetrain–or your e-assist, which is rapidly becoming the standard for commuting and utility bikes. Basically, over the course of 30 years, the bicycle went from the ultimate freedom machine to a non-serviceable proprietary appliance made out of fossil fuels and batteries dependent completely on the grid.

Meanwhile, over this same period of time, Steve Guttenberg has only become more obscure, and it’s only reasonable to assume his seeming “disappearance” is in fact the result of his secret work on behalf of the twisted bicycle technology cabal.

What does the future hold for the bicycle? Come, let us stare into the magic crystal ball of cycling fantasy to see my vision for the next generation of bike tech. Mechanical shifting is already being replaced by electronic components, and once your transmission has a brain, you can bet that automatic shifting will make its way from commuter bikes to performance bikes. Derailleurs will disappear. All of this will seem “simpler,” in the same way your smartphone is simple. But like your phone, you won’t be able to service it yourself, or mix and match components from different manufacturers, save for certain approved accessories, or even use the thing without first creating an account and logging in before every ride. Sure, the occasional wisened cyclist on an analog bike will try to accost you like in “The Rime Of The Ancient Mariner” and tell you tales of a time when you could shift for yourself, drivetrains didn’t need to be charged, and you could tune them with just a twist of a barrel adjuster instead of an app. But for the most part self-determination in shifting and every other aspect of bicycle operation will have vanished down the memory hole.

You’ll also lose complete control of your mountain bike. Wake up, dropper seat posts are already dropping themselves! Today, there’s Flight Attendant, which sounds friendly and helpful. But tomorrow it’ll be more like Flight Hijacker, and your bike’s CPU will take over your bike’s suspension completely.

As for your bike’s frame and components, there’s no reason to believe they won’t become entirely self-contained “modules” compatible only with themselves–black blobs stuffed with hydraulic brake lines like the stillsuits from “Dune.” What’s in it for a bike company to allow you to use someone else’s handlebars, anyway? You won’t have to grapple with tight-fitting tubeless tires anymore, either, because like the ones on your car, you won’t be able to put them on or take them off by hand at all. Instead, you’ll bring your wheel-and-tire system to a specialist who uses special equipment to mount and balance them on your rig. Outside the shop, Ancient Mariner guy will put a crochet cycling gloved hand on your shoulder and launch into a tale about how you used to be able to fix a flat on the side of the road in a minute and a half with a small plastic lever, a portable pump, and a patch the size of a dime. “What’s a dime?,” you’ll reply, then extricate yourself quickly and walk away lest you draw the attention of the Though Police.

Think about it: in the 1980s, you flipped a lever and your wheel popped out. In the 1990s, because of fork safety tabs, you flipped a lever, loosened the nut, fiddled with the skewer, and your wheel eventually popped out. In the 2000s, you fished out your multitool, removed your thru-axle, made sure not to squeeze your brake lever so your caliper didn’t seize, and then gently slid your wheel out while trying not to drop everything onto the roadway. At this rate it’ll only be a few more years before even attempting to fix a flat yourself will void your manufacturer’s warranty.

But while this is the future may be extremely likely, it is not inevitable; more importantly, you still have some agency over yourself and your bicycle. What can you do to prevent this dystopian vision? Resist! File off those safety tabs! Ride a bike made from metal that can dent, not resin-impregnated plastic that requires an ultrasound if it falls over while you’re taking a leak! Install a set of downtube friction shifters and cobble together a drivetrain made of components spanning several decades and made by two, three, even four different manufacturers! Buy a cheap-ass 1980s road bike off Craigslist or some other online marketplace and revel in the simplicity of a machine that requires absolutely no electricity or fluids, and that can be completely field-stripped with nothing more than a pair of Allen keys! Savor the tactile feedback of operating cable-actuated components, and the sound of a mechanical drivetrain, and the satisfaction of looking down and seeing your bicycle parts actually working!

Most importantly, pray that they bring back the Police Academy franchise. It could be the only thing that distracts Steve Guttenberg from his evil scheme.

Sure, You Can Keep away from the Crowds at (the Very...

This Victrola Report Participant Is Transportable and Sounds Superior