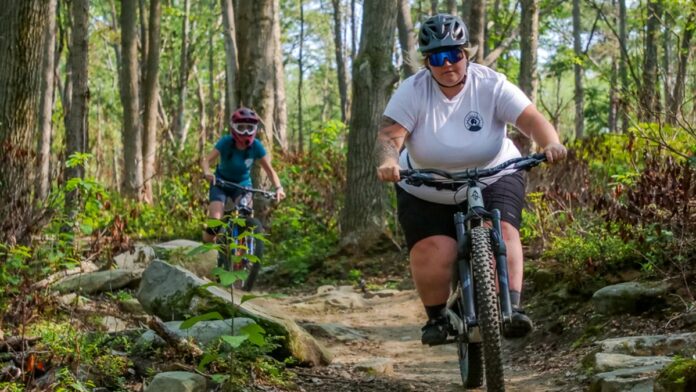 The other day, I found an old Joann Fabrics bag with a couple of yards of leopard-print dancewear fabric I bought over five years ago. The original plan? Make myself a pair of shorts to mountain-bike in. I’d been riding in leggings for years because nothing from a mountain-bike brand came in my size. I was fed up with being uncomfortable and didn’t feel like I fit in.

I don’t consider myself a seamstress—sewing makes me want to break things—but I was frustrated at the lack of apparel for me to do a sport I was obsessed with. It couldn’t be that hard to design some shorts, right? Well, that leopard-print fabric is still uncut, if that tells you anything. I got a good chuckle out of finding it stuffed in a corner of my house, because it reminded me of how long my now year-old mountain-bike apparel brand, Cosmic Dirt, was in the making, and how it was destined to be bigger than myself.

I’ve always been outdoorsy. I grew up in Corvallis, Oregon, in a family that spent our free time camping, hiking, rafting, biking, and cross-country skiing. As an adult, I moved to Bellingham, Washington, and became totally enthralled with mountain biking. Anyone who has ridden in this town will tell you that the access and the trails are nearly unmatched. The sport quickly became my whole life, but I still felt like an outlier—like the sport didn’t love me back.

My years of frustration came to a head in November 2020. I read an article claiming to be a round-up of kits for “plus-size mountain bikers,” only to find that the term was describing two women who wear a size XL, which correlates to a 14 or 16. In fact, size 16 is average for American women, and framing that size as plus leaves out a lot of us humans who range from size 16 to 30 and above.

I haven’t been an XL since I was 19 years old and 100 pounds smaller than I am now. I’ve been active my whole life, and I’ve never fit in women’s apparel made for the sports I’m doing. And yet here was an article—one of many I’d seen—using the plus-size label for average-size bodies, as though people like me just didn’t exist in the action-sports world.

So I took my anger to the internet and spent a couple of days yelling on my Instagram story about the state of outdoor apparel. I talked about my experience in the cycling industry, how hard it was to find clothing that fit folks like myself, which brands I thought were doing all right and which ones I wasn’t stoked on at all. I found I wasn’t alone: so many people had questions for me, and I wound up doing a Q&A addressing things like bike fit for larger bodies and how to motivate yourself to ride with people faster than yourself. I found that I had organically created a small community of people like me, who didn’t feel seen either.

Someone asked if I had started a cycling clothing brand yet. “I don’t have the time or the money,” I responded. “But if you have one of those things, let’s talk.” I laughed it off. But here’s the thing about social media: you have no idea who’s watching.

The other half of Cosmic Dirt, New York-based Heather Kinal, slid into my DMs that day and quickly became my angel investor, business partner, and close friend. Heather is an avid biker and former part-owner of a shop, and even though she is on the opposite end of the body spectrum, she had similar gripes about bike clothing. Nothing fit the way she wanted, either. As part-owner and bookkeeper for a large food-distribution business (and founder of Rooted MTB Fest in New York), she had the business experience that I didn’t. The first time we spoke, we tried to figure out how either of us could possibly trust someone on the other end of the country in a venture like this. I was worried that I’d invest time and effort to design something I cared deeply about, only to have the funding or business fail. Heather was worried she’d spend time and money on someone who wasn’t going to truly deliver. Game, set, match.

We started a Google Doc with ideas almost immediately. Initially, we planned to be a USA-based, made-to-order mountain-bike apparel company with custom fit clothing for women. We quickly realized how hard that would be to scale, so we abandoned our original plan in favor of doing it bigger and better.

We are still manufacturing in the USA, but we decided to design garments that fit a wide variety of people for mass production. We dropped the “for women” part, because clothes don’t care what gender you are, and neither do we. We don’t want to tell our customers who they are. We’d rather spend our time telling you who we are and what we care about.

Plenty of brands spend their time trying to tell you what you need and who their ideal customer is, which leaves a lot of wonderful humans out. Other brands claim to be inclusive but don’t offer anything above an extra large. Plenty of companies will claim they’re for anybody and every body, but the truth is, that’s nearly impossible. I want to be the first to tell you, we are only trying our best, and we aren’t perfect.

We currently have a line of graphic tees, water bottles, hats, and other accessories and are developing a full technical apparel line for sizes XS to 4X (which doesn’t exist in any cycling apparel currently). We’re also running a Kickstarter campaign, and we just announced a product launch I’m very excited about: mountain-bike pants. The 14 ambassadors on our team (women, trans, and nonbinary, all kinds of cyclists, not just mountain bikers) exemplify what we think it means to be inclusive, welcoming, and above all else, themselves.

Through all of this, I’ve had to overcome some pretty serious mental hurdles. I never expected to be a fat activist or a warrior for inclusivity. I grew up as a middle-class white kid in predominantly white PNW cities with a conservative family, and, though I’m ashamed to admit it, didn’t really understand what diversity looked or felt like, or why it mattered, for a long time. But I remember one day looking at my Pinterest board and realizing it was full of thin models in clothes I could never wear because they were made by brands that didn’t carry my size. It was one of the first times I realized how much damage lack of representation can do to an impressionable mind, and deleted the entire board.

Running this company quiets my inner demons at least a little. I spent so much of my life feeling like an outsider who didn’t belong in a sport I loved because of my size. But giving up isn’t really my style; I’m too headstrong for that. I’m feeling more confident that I deserve to take up the space I’m in. And in learning to make space for myself, I learned to make space for other people.

I couldn’t have predicted how many other people felt the same way I did. It turns out that more than half the world is tired of being shoved into a closet, told to dress in potato sacks and not to try sports because they don’t fit. I am inundated with messages from people who say that our brand makes them feel seen for the first time in the bike world. We are building a community of people who want more inclusivity from the bike and outdoor industries. I’ve been learning how important it is to listen, be open-minded, and create safe spaces for people who might not fit the mold the outdoor industry has sold products off of for so long. Bigger brands need to step up and do the same.

I still have a lot to learn, and I want to acknowledge that I’m a product of my environment and privilege, not my own making: I grew up in an active family with access to the outdoors, call professional athletes my neighbors and friends, and could choose to work for little pay in the outdoor industry. In some ways, though, the challenges I’ve faced because of my size might parallel challenges others might face because of their skin color, gender, or sexuality. I feel a responsibility to take the opportunities I’ve been given as far as I can to make a difference for others. That’s where Cosmic Dirt comes in.

I’ve said more than once, Cosmic Dirt is like a mushroom, growing beneath the surface where we can’t really be seen, fertilized by a bunch of shit, and one day we are going to pop out over the top of it all. Keep your eyes on us.

How carrying the mistaken helmet may kill you in the case...

Yamaha Out of doors Entry Initiative and Recreate Responsibly