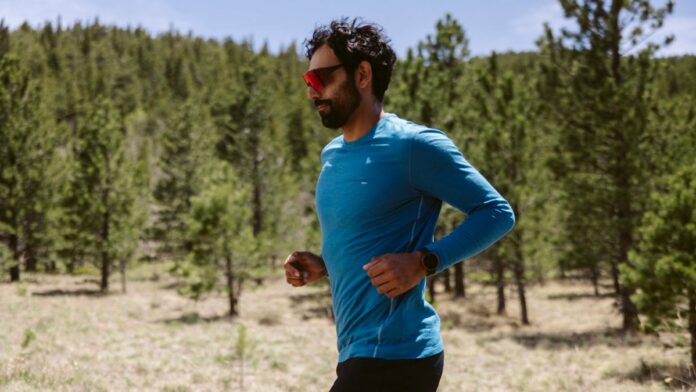 I’ve been a merino wool evangelizer for more than 20 years. You simply can’t beat the fiber’s combination of warmth to weight, moisture management, comfort, odor resistance, and sustainability for most outdoor activities during most of the year—but not all of the year, for me.

I’m a runner who sweats like crazy. I can lose five of my 130 pounds on an easy hour-long summer run, leave puddles when I wring out socks and singlets, and endure squishy-foot as I log miles. (If you have to ask, this is when your shoes are so soaked each foot strike is audible. And if you have to ask, ignorance is bliss).

When you sweat this much, merino isn’t a viable hot-weather option. The fibers saturate quickly, and your top just clings to you, eliminating the breathability that’s usually a top merino attribute.

Or so I thought. For the past two months I’ve been running almost exclusively in short-sleeve shirts made with Nuyarn, an innovative merino fabric from New Zealand that hit the market in 2014 and overcomes that sopping, sagging cling. I’ve stayed as or more comfortable than I would have been running in polyester shirts, while enjoying merino’s other significant virtues. Bonus: Tops that perform so well on summer runs are obvious candidates for less sweaty ventures such as hiking, cycling, canoeing, and chopping wood for next winter.

The yarn in a conventional merino shirt is created using what’s known as ring spinning. This process twists the wool fibers into a single-ply rope-like structure. As a result, only a small fraction of the wool is exposed to air and able to work merino’s moisture-management magic. By way of analogy, picture how much less effectively a paper towel twisted into a rope can mop up liquid, compared to one spread out flat. Ring spinning also makes the fabric vulnerable to holes—a frequent frustration for merino fans who have paid a premium for their gear—and limits how light it can be. A conventional merino top meant for hot weather has a weight of 150 grams per square meter (gsm).

Nuyarn, in contrast, is a two-ply yarn in which merino fibers are spun around a filament, primarily virgin nylon. (The company is experimenting with using recycled nylon.) The resulting yarn isn’t twisted and leaves far more wool exposed to the air.

Nuyarn merino, according to Wynne, is also more durable than conventionally spun merino. He says that on a Martindale abrasion test, which simulates repeated wear over a fabric, a 180 gsm traditional merino fabric will develop a hole after about 14,000 abrasions, compared to 70,000 for a typical Nuyarn product, and as high as 114,000 for the Artilect shirt found below, even though the Nuyarn samples are all much lighter than 180 gsm. “For us, durability equals sustainability,” Wynne says.

Nuyarn is an ingredient brand, akin to Gore-Tex fabric or BOA lacing systems, rather than one that sells its own apparel. Wynne says he wants the company to stick to its core competencies rather than do it all and have to deal with, say, marketing and warehousing a bunch of shirts for next spring.

I wore five shirts made of Nuyarn during two hot months, putting in between four and 25 running hours in each, and was continually astounded by the ability they gave me to run comfortably in merino tee shirts in summery weather.

Yes, if it was hot and/or humid enough, the shirts would get what Artilect founder Trent Bush calls “overloaded” (I call it “wring-out-while-running wet.”) But the same would have been true in my usual polyester singlets. And, unlike conventional merino tops, the Nuyarn shirts didn’t cling when soaked. They still breathed and flowed; the sweat I produced could achieve its purpose of cooling me. I also appreciated the extra protection from the sun and biting flies that shirts gave me compared to singlets.

There was a limit to my experiments, though. Above 85 degrees—at least East Coast humid 85 degrees—I valued extra airflow enough to don a polyester singlet. Note to brands: Produce a featherweight Nuyarn singlet with wide armholes, and I’ll be your customer for life.

I can’t yet report on durability, but the shirts I tested lived up to their promised quick drying times and odor resistance. I ran in one every day for a week and washed it only because I needed to flesh out a laundry load. It bore no olfactory evidence of my having sweated heavily in it for more than 10 hours. The shirts dried in about half the time my polyester singlets did after soaked-through-and-through runs.

The tops below are all fantastic at keeping you cool. All are 100% Nuyarn fabric, which is always a mix of merino and nylon. Their construction varies in terms of what that merino/nylon balance is, as well as their gsm weight. Here’s a little more detail on each.

At 115 gsm, this wasn’t the lightest shirt I tested, but for the purpose of running in heat, it was my favorite. The overall combination of weight, feel, fit, and elasticity was perfect for me. Also, I’m shallow, and give extra points for the fabulous A/CID yellow color of the one I ran in. Its cut is on the slim side, but nothing like a body-hugging Under Armour top. Reflective piping adds to its utility.

This is the lightest widely available Nuyarn top. Its 95 gsm is a little more than half the weight of a standard merino shirt, making it an obvious choice if “as light as possible” is your primary criterion. It has a barely there feel against the skin and can be seen through when held up to light, but stood up to wear without snagging or losing its shape.

Kuiu is primarily a hunting brand, but you wouldn’t know it by how well this 120 gsm top performed on muggy runs. That’s not surprising: In 2014, Kuiu was the first brand to sell apparel made of Nuyarn. This shirt is a good candidate for a do-it-all, unflashy base layer.

This was the longest and widest shirt I tested, making it a good choice for taller, more muscular body types than mine. It’s a light 120 gsm with 70 percent merino, 30 percent nylon. There’s also a pocketless version.

Of the shirts I tested, this one feels most like traditional merino top, while lighter at 125 gsm with 85 percent merino, 15 percent nylon. It hits just below the waist, a comfortable length many people prefer for running and other high-output activities. It’s the only one I tested that’s made in the United States (using, of course, imported Nuyarn fabric).

Eight out of doors actions to do that summer time round...

5 Purchase-Rated Recreation Shares to Examine Out with Temperatures Rising