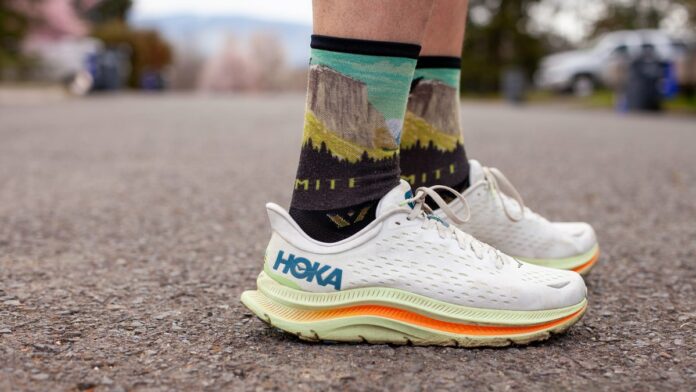 I’ve been testing Hokas for this publication for nearly a decade and will admit up front: I’m an unapologetic Hoka fanboy thanks to what I think are supportive, performance-oriented shoes that suit my aging athlete’s body. So I was very excited to try Hoka’s newest addition, the Kawana, its first run-workout crossover, which hit the market in February. After over a month in these shoes, I can say they’re a candidate to be my favorite pair of Hokas, period. And that’s saying a lot. I don’t know if I have ever loved a shoe like I have Hoka’s Clifton 8—a consistent bestseller because of its ultraplush running experience. They are what I wear to chase my four-year-old around the playground and what I wore to run a 50-mile race last summer.

I have logged 100 miles (68 road and 32 trail) and almost 11,000 feet of elevation gain and loss in the Kawanas. It’s enough mileage to write a first-look review, but I cannot make any calls on their durability, including whether their plentiful cushion has a diminishing return over the course of their lives. But right now these shoes deliver delightful support on road and trail while remaining lively and nimble during tempo runs and steep technical trail runs. This level of support and performance comes via the rockered midsole, airy jacquard upper, swallow-tailed heel, and a new type of midsole foam with 713 cubic centimeters of volume—that’s 57 more than the generously padded Clifton 8.

Last March, I wrote a review of Hoka’s wild-looking TenNine Hiking shoes. The rear of the TenNine’s outsole featured a prominent swallow-tailed protrusion (two bulges separated by a triangle of blank space) that made them look, frankly, like futuristic clown shoes. Spoiler: I grew to love the support and stability they provided, especially on descents. While researching that shoe, I spoke with Hy Rosario, senior product manager at Hoka, who told me that the technology would “filter down through” Hoka’s range. These are the first shoes I have run in with that tech, and I’m a big fan.

Hoka calls the extended heel a “crash pad” and its goal is to intercept the force from a heel strike and move the impact further along your gait. The exterior side of the Kawana’s swallowtail is about a half-inch more pronounced than the interior side and is apparently meant to distribute the weight of a heel strike. According to the brand, the system doesn’t allow you to experience the deleterious effects of a heel strike even if your gait or the terrain is forcing you to slam that heel into the ground.

But how did it work in real life? My experience was totally positive. I thought about the tech as I descended a steep trail at the end of a 6.72-mile trail run and during a tiring tempo workout on a concrete bike path. But I couldn’t feel any major correction or impact distribution, which I think was a good thing. My gait felt organic and I received sweet cushy comfort with every hit.

It wasn’t too plush, though. The shoes felt lively enough during speed work and responsive while ascending technical singletrack. According to the company, compression molding extends the time it takes to pack out the new CM EVA foam, but I would need at least 100 more miles until I weigh in on that.

Curiously, Hoka is marketing the Kawana as both a run and a gym shoe, which, to be honest, I don’t really understand because it’s such a fantastic distance-running shoe. I conducted a circuit in my garage that consisted of squats, burpees, and a sprint and found it to perform fine—but didn’t find any specific features that jumped out at me in the workout department. I did the same circuit in my Clifton 8 to compare and found the performance nearly identical. Both felt cushy and supportive but not particularly peppy, whereas both feel just right on a long run.

So who does the Kawana make sense for? If you struggle with your stride during sprint work or your feet and legs feel particularly hammered after long downhills, it’s worth checking out over the Clifton.

Your 101 Information to Ice Climbing