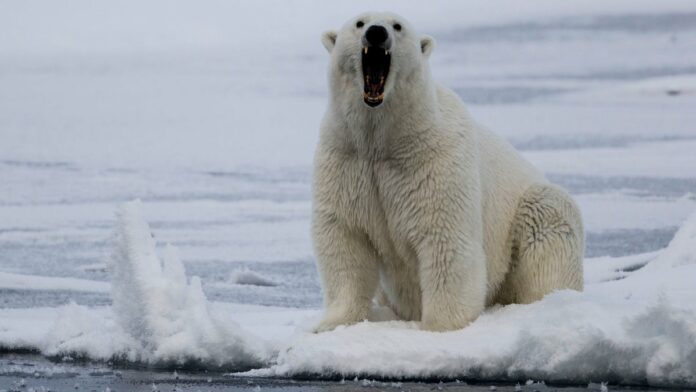 Our group had stopped to remove our boots before a small stream crossing after a morning of exploring the seaside foothills of Canada’s Torngat Mountains National Park in Newfoundland and Labrador. I looked up, and there it was, about 150 yards away, staring at us: a polar bear. Our guides had warned us about the dangers of polar bear country, but I thought I’d be lucky if I saw one in the wild.

I’ve seen plenty of black bears, but never anything this big. This guy was a bruiser. We gathered together and began shouting at the bear, but when that didn’t frighten it, our guide, Rich, shot a flare its way. The bear scampered to a ledge, and we crossed the stream into camp. It stayed put as we cooked and ate our dinner. When bedtime rolled around, I glanced up at the ridge. The bear hadn’t moved. I started cycling through all the worst-case scenarios that could happen, but I tried to remember everything we’d prepared to keep us safe.

Our guides had rigged an electric fence meant to deter bears around our tents. It ran off a couple of DD batteries, like you would put in a flashlight. I was skeptical that something so flimsy could discourage a polar bear, but the outfitter said if we touched it, the shock would blow us out of our hiking boots. I crawled into my tent and tried to get some rest.

I lay awake, riddled with anxiety, but eventually sleep got the best of me. A few hours later, I stepped out of my tent to go to the bathroom, and the bear was gone. Oh, thank God, I thought.

Read More: A Polar Bear Attack Is a Hiker’s Worst Nightmare. Here’s How to Prevent One.

The sounds of rain and sleet lulled me back to sleep. Around 2:30 A.M., movement outside woke me. I had been sleeping on my back and looked up to see a shadow towering over my tent. I recognized the shape immediately: two big bear legs. I screamed, and the creature crashed down on top of me and started clawing at me through the fabric. I covered my head with my hands as its massive teeth reached for my face. The next thing I knew, my head was in its jaws.

The polar bear flung me, and I flew through the side of the tent with such force that the wind was knocked right out of me. Still holding me by the head, the bear started running. He dragged my helpless body away from our campsite, exhaling a thick stench of dead fish as he ran. A voice in my head told me, You’re going to die.

I could feel the bones cracking where the bear was biting my neck and skull. Then I heard a swoosh and saw a flash—Rich had shot off a flare. The bear dropped me and sprinted about 50 yards away. I tried to get up, but I was too broken to move. And the danger wasn’t gone: I heard the sound of beach rocks shifting as the bear walked closer and closer. My trip mates screamed from somewhere nearby. Don’t come back, bear, I pleaded internally. Don’t come back, don’t come back.

Rich shot another flare, and then—silence. He and three others began dragging my body back to camp. I was bloodied and unable to move, and I am sure they thought I was dead. I could hear someone trying to call for help on a satellite phone. Despite the pain, relief washed over me. Moments ago, I had all but given up. I can’t believe I’m alive, I thought.

The bear had destroyed our electric fence, so my companions stood guard outside the tent with flare guns. Nearly eight hours later, a helicopter arrived.

The next day, I woke up in a hospital in Montreal to my wife looking at me. The bear had cracked my jaw and several vertebrae, bitten clean through my hand, and left gashes on my skull and neck. I had a collapsed lung, a collection of puncture wounds, and a busted larynx that left me unable to speak for weeks. But I was alive, and that’s what mattered most.

Hear Matt Dyer’s story in his own words on Backpacker’s Out Alive podcast.

The world’s highest Vertical Kilometer®, marathon and extremely marathon shall be...

Out of doors Retailer Summer time Attracts Over 550 Manufacturers For...

A Trout Stream Close to Luxembourg and Germany Is a Fly...