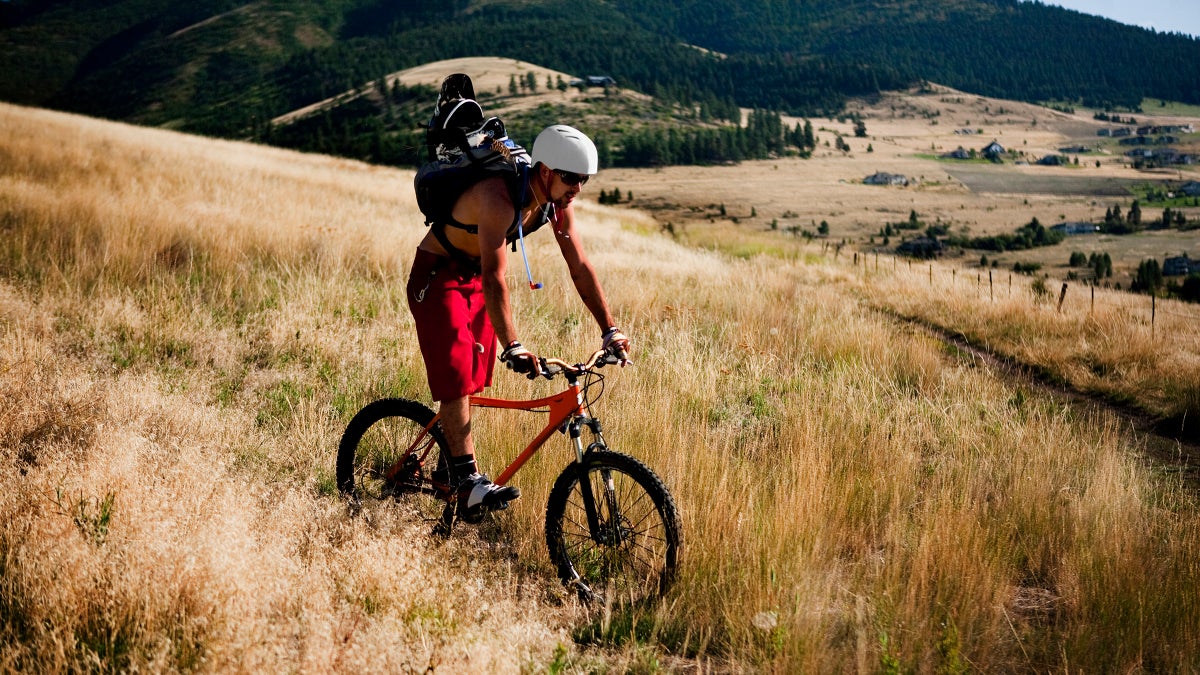 As a lifelong cyclist, I’ve always sort of hated running, on some deep biological level. Oh, sure, I may have entered a handful of 5Ks and 10Ks in my time, and even finished a half marathon (once). But I remain convinced that the reason bicycles were invented is because running sucks.

There is one thing I really envy about runners, though, specifically male runners: they get to run shirtless. When it’s warm out, they just whip their tops right off and prance along in nothing more than their tiny little flappy shorts. I resent them deeply for it.

Because for some reason, “serious” cyclists are not permitted to do this. It doesn’t matter that we ride around in skintight, crotch-hugging outfits—what former pro rider and Education First team boss Jonathan Vaughters calls “the functional equivalent of underwear.” On a very hot day, we might unzip that too-small Lycra jersey for a smidge of ventilation. But no matter what, said jersey must remain on, at all times.

Among the Lycra set, shirtless bike riding is seen as a big sin committed only by utter noobs, along with unworthies like snowboarders, libertarians, and one of the dads on Modern Family. But if you look around, you realize that Shirtless Bike Dude is everywhere—including the tracks of the New York subway and the streets of Venice, which they wheel down illegally. If you showed up for a group ride sans jersey, or took it off halfway through a century ride (again, I’m talking about men here), “real” cyclists would shun you like a drunk at a Mormon wedding.

Don’t get me wrong: I, too, once judged shirtless bike riders quite harshly. I kept a folder of photos I’d snapped of the most flagrant offenders. Occasionally I’d make fun of them on Facebook. But then I tried it myself, peeling off my jersey on a long rail-trail ride a couple years ago on the first really warm day of summer. There were few people around, and it was hot, and I longed for the feel of sun on my skin. I came home a changed man.

Not long ago, CNN tracked down notorious vaccine misinformation spreader Joseph Mercola as he was leaving the beach near his Florida home. The 67-year-old osteopath was not only riding his bike shirtless, he was shoeless, too. He pedaled away without comment, just another Florida man wobbling off into the sunset. But while Mercola may be wrong about COVID-19 (and much else), he and I are on the same page about shirts and bikes. Riding the latter does not require wearing the former. As the muggy, smoky summer winded down, I became convinced that sometimes you just need to take off the shrink-wrap jersey and enjoy the breeze.

On yet another hot Tuesday in Salt Lake City, a week before Labor Day, I headed out on a noonish bike ride. I’d meant to start earlier, but nagging work email detained me. I set out on one of my typical lunch loops, a short urban cruise with some punchy climbs. A few blocks from home, I realized that it was already damn hot. And I was sick of being hot.

There was only one thing to do. I pulled over in a church parking lot, took off my fancy Rapha T-shirt, and stuffed it in my saddlebag. Then I set off again, feeling self-conscious.

It’s difficult to overstate the hatred that cycling cognoscenti have for shirtless bike riders. Earlier in the summer, when I’d started to become shirtless-curious, I took a quick trip through various cycling-oriented message boards. “There’s something about a guy that rides shirtless that really kinda pisses me off,” wrote one commenter on MTBR.com, a mountain-bike forum. “Unless you’re a hot chick, leave it on,” another moron opined. “Every time I see guys riding shirtless, I feel a strong urge to pick a fight with one of ’em.”

My own goals were more modest: I wanted a workout, plus some vitamin D and a dose of mildly transgressive freedom.

Recently, a “somewhat new to cycling” rider, who lives and rides in Houston’s unbearable heat, innocently posed this question on Reddit: “Do you guys think it’s socially acceptable to ride shirtless?”

“No one wants to see your naked 57-year-old body,” one commenter predictably shot back. “Wear a fucking shirt like an adult.”

“Only if your first name is Mario and your last name is Cipollini,” another wiseass replied.

Ouch. That reference was to the flamboyant Italian sprinter from the 1990s, known as much for his outrageous riding kits (including a tiger-striped bodysuit and a Julius Caesar costume, both of which got him fined by Tour de France officials) as he was for winning races. A quick check of Instagram revealed that Cipollini, now a retired 54-year-old, does often ride shirtless, displaying his Arnold-esque physique to the world.

Among us mortals, the bearer of the torch is Shirtless Keith. A legend in Los Angeles cycling circles, Shirtless Keith is a burly man of indeterminate age who rides around hilly Palos Verdes wearing work boots, denim cutoffs, and no shirt. He’s as strong as an ox, splendidly tan, and able to drop many of L.A.’s Type A roadies on local climbs, despite pedaling a single-gear bike that weighs twice as much as a fancy road rig.

My own goals were more modest: I wanted a workout, plus some vitamin D and a dose of mildly transgressive freedom. This wasn’t going to become my lifestyle, nor was I trying to impress anyone on social media.

I sailed down the street and into a busy city park, headed for my favorite bike path. I braced myself for scornful looks, maybe even shrieks and catcalls, possibly even a fight—but no one noticed, except for a jerk in a Subaru who shot me a disapproving smirk. He had a reason to be sad: He was stuck driving, while I was riding my bike. Shirtless. I was free. A pleasant breeze riffled through my patchy chest hair, and my love handles jiggled happily, soaking up the sun. It felt freaking awesome.

The most common namby-pamby objection to shirtless bike riding goes like this: What about sunburn? To which I say, have you ever been on a beach and seen cycling tan lines? Those are worse than any sunburn. Plus there’s this stuff called sunscreen. Problem solved.

Objection two is usually along the lines of: What if you fall? Having crashed many times, I can testify that a cycling jersey isn’t much help when you fall; it’s much more important to wear a helmet. Even more important is to not crash. My personal rule is this: if high speeds or sketchy singletrack are likely to be involved, wear the jersey.

There’s a third objection, which starts with the fact that cycling jerseys play an important role in bike culture. Your jersey tells other riders who you are, for better or worse. The nicer ones are made of fancy wicking fabrics, and they can cost a lot of money as well, so why not wear them?

Because the ultimate wicking fabric is—wait for it—no fabric. As I cruised along bare chested, my sweat actually cooled me off via evaporation, just as evolution intended. And I felt extremely aerodynamic, even if I didn’t necessarily look it. My lack of jersey announced to the world who I had become. I had become Shirtless Bike Dude.

As I turned onto a road that leads to a popular local climb, some other road riders actually waved to me. I couldn’t believe it. Roadies never wave. I sat up, proudly pushed out my skinny chest, and gave them a big wave back.

Now that Labor Day is past, Shirtless Bike Dude’s days are numbered (well, except in Florida). Soon he’ll go into winter hibernation, getting pasty and battling seasonal affective disorder like the rest of us. If you see him, be sure to wave.

Paddles Up Niagara a ‘legacy outside recreation occasion’

Get the Full Alaska Expertise in Anchorage

Quakertown now utilizing outside recreation in its city planning in bid...

Be part of the Ransome Sporting Items Group Group