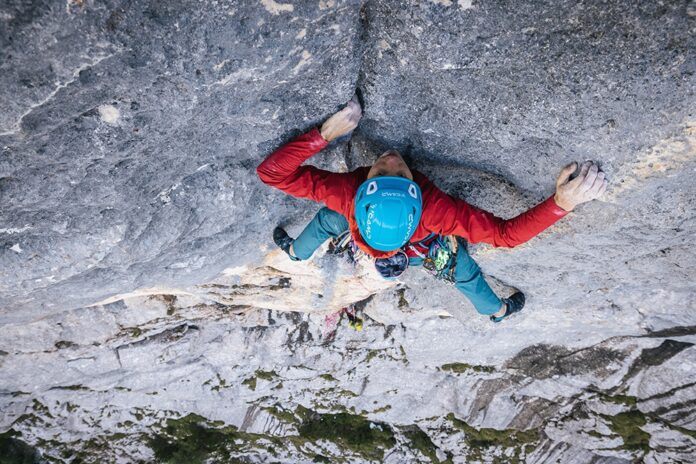 Ines Papert has made a free ascent of Wolke 7 on Hintere Feuerhörndl at Reiteralm in the Berchtesgaden Alps in Germany. The 350m 8a was established ground-up by the German climber in 2020 with her Slovenian husband Luka Lindič, who also made the first free ascent. Papert reports.

The lockdown due to the worldwide pandemic in 2020 opened our eyes to the undiscovered potential slumbering in our home mountains, the Berchtesgaden Alps. Our disappointment due to a cancelled Alaska expedition was quickly replaced by the euphoria of climbing a new route on one of the most difficult walls in the Alps.

Together with my partner Luka from Slovenia, it quickly became clear in what style we would attempt the steep, almost 400m high wall. Luka had discovered an almost continuous crack system during his attempts on the legendary The end of silence, established by Thomas Huber in 1994.

The fact that that section of the wall often remained wet would prove challenging only later. Instead, during the first ascent we challenged our morale pitch by pitch, because our route should in no way be inferior to the neighbouring lines on the steep pillar, approached in a similar style. Challenging, but nevertheless adequately safe for climbers with a lot of experience.

After 4 days on the wall, Wolke 7 was completed. We were very pleased with such a gigantic route on our doorstep. We got by with a total of 17 intermediate bolts on the 350m route, while the numerous cracks allowed for trad belays.

The vows
Reconciled with the situation of limited freedom of travel and happy that we had found each other as a climbing couple, we gave each other the “vows” under the rocks of Reiteralm that summer. When Luka succeeded in climbing through the last roof, a few clouds floated through the Saalach valley, providing some welcome shade. And that is when the name was born, we were floating on our “cloud 9”.

To me, in addition to the promise of marriage, he also promisee to support my attempts at climbing this route free. But the summer remained fickle and the route did not dry, which became a problem for me, in particular on the most difficult pitch, the dark overhanging dihedral crack. Frustration set in.

Attempts
In the summer of 2021, I tackled my project again and spent a few days up on the Reiteralm, but the wall continued to stay wet. Time and again I fell on the 5th pitch, and I could not even work out the beta. I was close to giving up, then winter arrived yet the dream remained. I had hoped I would come to terms with failure, but in vain. It felt unfinished, the final satisfaction of this route remained incomplete. I put the venture on hold, with no concrete plans to return.

Then in 2022 we experienced the summer of the century, but initially I was by no means strong enough. Luka reminded me at intervals to try it again and so I spent an intense 2 weeks, pushing all other commitments to the side, exclusively on our route. Mostly alone, but also accompanied by Luka or my son Emanuel.

The free ascent
On 14 August I still didn’t know exactly how I would climb the crux. But it seemed to be the last day before the forecast rain. I knew from experience that this was going t be my last chance, because in late summer the face would hardly dry out. But would I be up to the psychological commitment of this route?

We reached the base of the climb early in the morning, with little more than one attempt planned to free climb the entire route on lead. This calmed my nerves and I felt free to give everything.

A little later I entered the 5th pitch, improvising and struggling while Luka cheered me on, my forearms on the verge of exploding. Suddenly I’d passed the crux and I reached the upper belay. For the first time, all the holds and footholds were dry.
I screamed with joy, but at the same moment I realised that there was still a long way to go.

Initially everything went according to plan, until I reached the featureless section of the wall which, to me, felt like the most difficult of the entire route. A very long move off small holds. I failed, and fell. The sun came around the corner and my fingers began to sweat. For a moment I lost faith in myself.

Back at the belay, my husband took me in his arms, removed last doubts and recommened I take a break until a cloud would put itself in front of the sun. Thank you, Cloud 9! A short while later I managed to hold an extra, barely visible crimp and barely stuck the move. Now all I had to do was climb carefully and finish the route, and I knew that, even with little energy reserves, I make it through the 7c roof further up. And so, on the afternoon of 14 August 14, a dream came true. I stood on the summit of the Feuerhörndl and had free climbed our Cloud 7!

In infinite gratitude for Luka’s support and the endless mountain adventures in my home Berchtesgaden, I now look contentedly up to the steep walls of the Reiteralm.

Mount Everest Is Extra Accessible than Ever. Is Good Factor?

Outside services will stay open on New 12 months’s Day for...