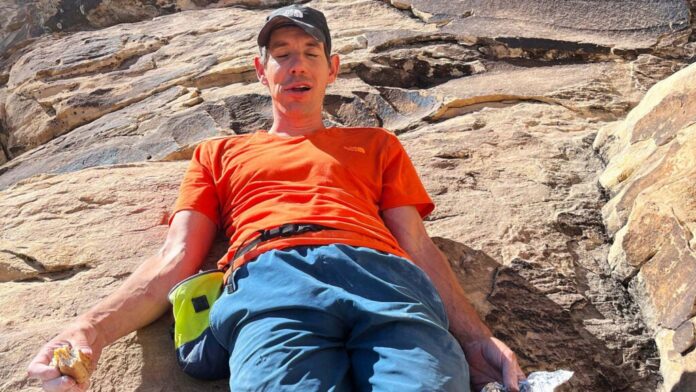 “We’re on the summit of Indecision Peak (First Creek). Both totally destroyed.

I’d say that Ray shouldn’t head up Black Velvet Peak yet, you guys should wait and see if we make it there/are able to continue. …

Honestly, the thing that could save us would be savory food an[d] water up Hidden Peak. But how anyone will get there is beyond me…

The text from Alex froze my hurried preparations to rally into Black Velvet Canyon with the support and film crew, where I planned to join Alex on the final leg of his journey across the Red Rock skyline, a massive effort that he called The HURT (Honnold Ultimate Red Rock Traverse). It was 7 A.M. on Tuesday, October 11. Alex had been on the go for over 24 hours, and suddenly it appeared as if the wheels might be coming off.

A year and a half earlier, while driving to Yosemite in April of 2021, I made a pit stop in Las Vegas and did this exact segment with Alex: a convoluted bushwhack to connect Black Velvet’s Epinephrine (5.9; 1,600 feet) and subsequent summit to Windy Peak’s Jubilant Song (5.8; 800 feet) and summit. I thought I was being treated to a long-neglected outing up the Red Rock classic but shortly came to learn Alex had a deeper agenda. Inspired by his recent completion (with Tommy Caldwell) of the CDUL in Rocky Mountain National Park—a mega link of 18 peaks near Tommy’s house in Estes Park—Alex had begun envisioning a similar, though perhaps more logical, traverse of Red Rock Canyon’s skyline, a feature in his own “backyard.” His goal from the beginning was to tag all of Red Rock’s major sandstone summits via classic routes, free soloing up and down them, in a single supported push. While they may seem deceptively simple when viewed during a leisurely tour around the loop road, Red Rock’s intricate sandstone canyons can quickly devolve into a maze of impassable cliff lines, cacti, and crumbling slopes. Since much of that terrain does not contain trails or see traffic, it involved significant route-finding and prep work. During one such solo excursion, Alex broke a hold while descending a steep gully and tumbled a few dozen feet; he returned home relatively unscathed, but the incident underscored the unforgiving nature of the terrain.

The day after our outing, just as I was pulling out of the driveway, Alex returned from another scouting mission in a dour mood.

“How was it?” Sanni inquired in her trademark cheery disposition.

Nonetheless, the seed had been planted. Fast forward a year and a half, add a baby, subtract some sleep, and Alex—fresh off a six-week expedition to Greenland—returned his focus to more “family friendly” backyard endeavors, i.e. objectives that could be squeezed in between feeding times, naps, and work calls. He once again began scouting the various sections, piecing together classic rock routes up and down each peak, pioneering laborious, thorn-covered ways to connect them, and scheming for support strategies.

A crucial resource was local ultrarunning legend Chris Gorney, holder of numerous Red Rock area FKTs. Chris shared GPS tracks for tricky segments, joined Alex to scout a five-plus hour odyssey up and over the behemoth Bridge Mountain, and, crucially, volunteered to support Alex’s game-day effort. The night before the big day, Chris rolled up to our porchfront pregame huddle on his bike (“only seven miles” each way) sporting thigh-high spandex shorts, a cut off pearl snap, bike cap, and thick beard. (For those who know, he’s basically Vegas’s version of Boulder’s Anton Krupicka.)

Alex began his journey at 6:15 A.M. on Monday, October 10, climbing Tunnel Vision (5.7; 800 feet) and linking it to the top of White Rock Peak. After much discussion, and some reticence (particularly from Sanni) about compromising the purity of a very personal project, he had agreed to a low-impact film team consisting chiefly of myself and Chris, who’d use iPhones, and Alex’s longtime friend Brett Lowell, who just happened to be in the area. At the last minute another of our good friends, Pete Mortimer, owner of Sender Films, hopped on a plane from Boulder, delighted by the chance to witness another absurd Honnold endeavor. It had been so long since Pete, now mostly an editor and deal maker, had actually held a camera that Brett had to get him up to speed.

Two hours into the traverse, Chris joined Alex for the same Bridge Mountain segment they’d scouted together, roughly ten miles and 5,000 vertical feet of rugged mountain terrain depositing them at the base of Mescalito’s Dark Shadows (5.8; 1,000 feet), where Chris was to pass me the support baton. I planned to spend my day cloverleafing in and out of canyons while Alex climbed up and over their corresponding buttresses—providing him with food and water and, if necessary, motivation. At 11:30 A.M. I was at that first stop, where our estimated itinerary had them arriving around 1:00 P.M., when suddenly I heard Alex’s trademark Marco-Polo whistle.

“He is raging,” Chris said. “I was just trying to keep up with him.”

And that’s how it went, at least for a while. Over the next few hours Alex continued to expand the gap on our estimates, and I had to be mindful not to watch him climb for too long as I chanced him beating me to the next drop point. When he donned his rock shoes for the first time—for his tenth route of the day, Crimson Chrysalis (“5.8++++” per Alex’s notes; 1,000 feet)—he was a full three hours ahead of “schedule.” He ascended the iconic route framed by a beautiful desert sunset reminiscent of a Maynard Dixon painting.

Four hours later Sanni and I watched a lone headlamp descend Rainbow Mountain and down climb Solar Slab (5.6; 1,500 feet), then greet us in the lowlands en route to Mt. Wilson. Sanni had laid out a charcuterie selection of energy food, egg-cheese-bagel sandwiches, and Oreos (critical beta); I refilled his hydration bladder. “I’m definitely starting to feel kinda tired,” he said, the words redundant with his deeply fatigued visage. Mt. Wilson and the technical crux loomed above: Inti Watana, a sandbagged 2,000-foot 5.10c. We all hiked together to Wilson’s lower flanks.

“Ok be safe…” Sanni offered as the grade steepened and we slowed to head back toward the car.

Turning around disappointedly, “You guys are leaving?”

His eyes betrayed a forecasted loneliness.

Nine hours later and there we were in Black Velvet Canyon. Chris had hiked up Mt. Wilson to meet Alex on the summit, expecting to descend to the base of the blue-collar crux, Celtic Cracks (5.10; 1,300 feet), then drive and hike around to rejoin him on the upper ridge for another couple of hours. However, in a wise move showing that discretion truly is the better part of valor, Alex chose to forego Celtic Cracks in favor of a fourth class scramble. Chris, ever the team player, kept pace, enlisting himself in a ten hour outing rather than the planned four hours. (In total Chris logged 25 miles and 18,000 feet of vertical gain over 18 hours while supporting Alex.) The midst of that is when Alex sent his sobering text, and we all realized we were well past the “fun meter.”

Honnold on the “summit” of Black Velvet Peak during the HURT. (Photo: Maury Birdwell)

Alex’s effort on the HURT is inspiring, but allow me to suggest that it’s inspiring for inobvious reasons. Sure, he went huge and yet again racked up a lifetime tickl ist in a single push, redefining our concept of what’s possible; but all those are just numbers and statistics. Read or watch films about climbing’s earliest obsessives, before the nonstop desperation of Instagram influencer-athletes and the constant reach for some qualified superlative at every accomplishment. What you’ll see is a bastion of counter-culture dreamers, what Lionel Terray aptly termed “Conquistadors of the Useless.” There were no likes, no followers, no 8a.nu scorecards, and certainly no big paychecks (British Royal expeditions excepting). Instead, climbers arbitrarily gazed upward and cast off into the unknown fueled by intrinsic inspiration and tribal one-upmanship, climbing simply “because it’s there” and because something within them required it.  Nonetheless, those dirtbags gave us billion dollar sportswear companies dedicated to saving the planet and the largest ever private land donation to the public. Perhaps their quixotic ramblings had some merit.

The HURT is entirely made up. In the hour-long debate in Black Velvet Canyon as to whether Alex ought to continue, Mortimer questioned, “Alex, why keep going? This is already a massive accomplishment and super proud. And you get to decide what this is. So by stopping now you aren’t coming up short of anything.”

With a pained look Alex simply replied, “Because there’s a value to picking a goal, and doing what you said you would do, not just quitting when it’s hard.”

I’ve climbed with Alex on big wall epics in Africa; I supported him on the CDUL; we’ve backed off El Cap. The only time I’ve ever seen him this ground down was during a likely malaria infection in Angola.

“Going big” and reaching for the unattainable is something we can all do on our own terms. None of it matters in the truest sense of the word, climbing is about as existential as it gets—heck, the majority of the time there’s even an easier way to walk up the backside. What matters is the experience you create for yourself, and that you don’t come out the same as when you started, because at the end of the day we’re all just idiots running around chasing windmills, but we just might learn something in the process.

Ultimately Alex decided to finish the traverse, and the easiest way was up and over Epinephrine. He and I climbed alongside each other, laughing and making fun as always—Alex’s quick wit not slowed by his exhausted body. Shortly after the summit we linked up with our final hero of the support crew, Ray, who’d hiked our extra supplies out from the base, driven around, and run up the ridge behind Red Rock to find us. We all three slogged to the highest point of the limestone ridge, forced Alex into a photo op, then enjoyed a gentlemen’s hike down. Sanni met us soon thereafter and awarded Alex the “joy” of carrying baby June up and over the final hill to the trailhead parking.

Look for a short film documenting the HURT coming to Reel Rock.

In 2012 Maury Birdwell and Alex Honnold founded the Honnold Foundation, which celebrated its 10 year anniversary over the weekend prior to the HURT, announcing the launch of the Levine Impact Lab: a first of its kind capacity building accelerator for impact-driven nonprofit organizations.

Duderino and Buffalo Wall (Honnold: “both have summit registers but are pretty silly…”)

Jackrabbit Buttress (Honnold: “if you consider that a ‘summit’ ”)

Bench below the Rainbow Wall (Honnold: “register but kind of silly”)

Silvio Reffo frees his Musa, a brand new 9a at Covolo,...

A Tour de France End on Your Native Bike Path