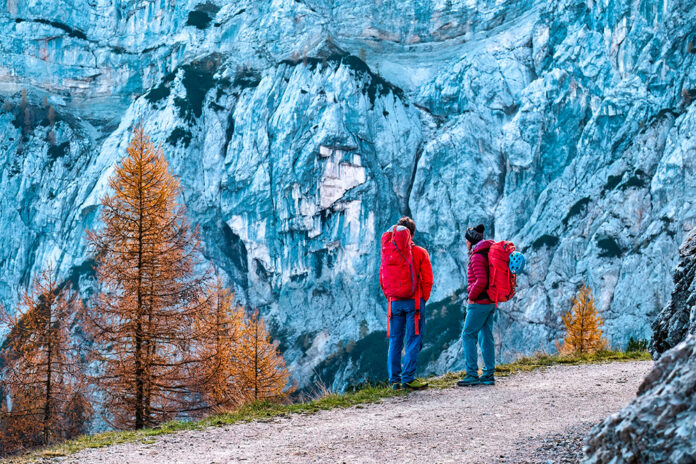 In August 2022 Slovenian climber Luka Lindič freed one of hardest lines in the Julian Alps of Slovenia, ‘Invisible Transformation’ on the iconic face Ajdovska deklica, the Heathen Maiden, of Mount Prisojnik. The testing multi-pitch close to Kranjska Gora was established ground-up with his partner Ines Papert in the summers of 2021 and 2022. Lindič reports.

As climbers we often stare at walls in the search of lines to climb. In the Slovenian Julian Alps there is a wall that literally stares at you. With a human-like face and almost perfect symmetry the wall with these unique features is called the Heathen Maiden (Ajdovska deklica in Slovenian). The wall face has a special place in Slovenian history and culture.

Legend has it that the maiden was a good-hearted villager who often guided travelers through snowstorms. She was also able to foretell the fates of unborn babies. One day, she prophesized about a boy who would grow to become a hunter and catch the Zlatorog, or Goldenhorn, a mythical chamois buck with magical powers. Infuriated that she foresaw the death of the Zlatorog, so the legend goes, the maiden’s siblings placed a curse on her. When she returned home to Mount Prisojnik, her body was transformed into stone.

This myth is of such importance for locals that until not so long ago the people transporting goods over this mountain pass always left a piece a bread on the pass for the maiden. Today the rock formation may be one of the main tourist attractions in Slovenia but it still holds a mysterious position in the history of the Julian Alps. This could be because the only way to get very close to the face of the Heathen Maiden or even touch it one needs to be a climber. The only existing route through the face was climbed in 1984 by three legends of Slovenian alpinism: Janez Jeglič, Silvo Karo and Franček Knez. Their route has never been free climbed, and the wall saw next to zero activity in the last years. The climbing community somehow considers it more of a place where you go for aid climbing.

I don’t know how many times I’ve climbed through the mouth, nose and dangled from the eyebrow before mantling into the lower angle terrain in my fantasy. Last year Ines and I went to have a proper look at the face. Just a few meters left of the existing route that follows mostly yellow rock we some spotted promising features in more grey rock. This type of rock is usually of better quality and more featured than the yellow kind. We returned, optimistic to try and find a new line that would go free.

On our first day of climbing from the ground up we already faced a very steep crux between big roofs. I couldn’t find enough holds to get through. So, we finished the season uncertain if the line would be possible or not. It turned into a main project for this year. Finding just enough holds in the roof felt priceless. The following pitches offered very exposed climbing with lots of zig-zaging between the roofs. During our visits in the middle of the summer it was high season for tourists. There were thousands of people passing the mountain road to Vršič pass from where one can see this rock feature clearly. There were probably as many photos taken every day as there were tourists passing by. I was wondering if their photos and numerous selfies look different with what we were doing in the wall and with us as two small figures in it. While finishing our new route towards the end of the summer we felt like we were being watched from two sides. Tourists and hikers from the road and trails from one side and the face itself from the other.

The very warm and dry summer quickly came to an end with a cold and wet period. It almost seemed that the season in the mountains was over. However, on a rather cool day I was lucky enough to free climb the whole route without falls. Just like in my fantasy I was dangling from the right eyebrow before mantling into the lower angle terrain of the forehead. This time for real. We named the route Invisible Transformation. The maiden still looks the same, but I believe we kind of transformed it into a place for difficult free climbing. This place has a feeling of something sacred in a way. We felt we want to preserve this. That’s why I am not giving a number grade to this climb. It’s definitely one of the most challenging lines in Slovenia. But I wish that those coming to repeat it will be motivated for a different reason. I truly believe there is no other wall like this on our planet. What more should one say.

First ascent: Ines Papert and Luka Lindič summer 2021 and 2022
First free ascent: Luka Lindič in August 2022
Techical info: The route has bolted belays and is 150m high. The protection in the pitches is a mix of pitons, cams and few bolts. All the fixed gear was left in place. The line follows a wildly overhanging terrain and often traverses left and right to follow the path of least resistance. Because of this retreating is very difficult and could pose a serious problem.
Gear: a set of cams from micro to #3, 10 quickdraws, a few long slings to reduce rope drag.

Oglesby electrical charges aren’t climbing, for now, regardless of market

The Ethics of Through-Mountain climbing with Youngsters