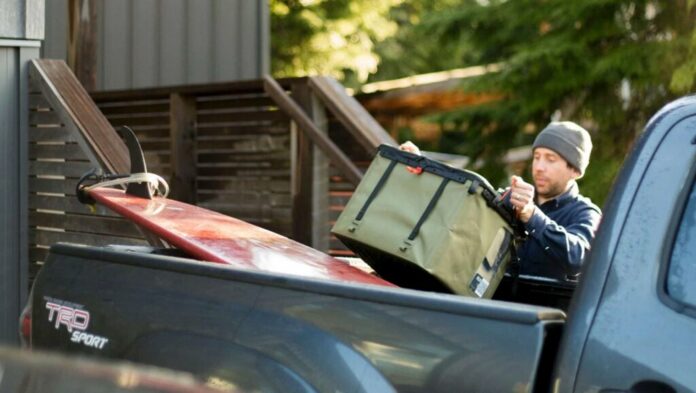 Inexpensive plastic storage bins are an integral part of my gear organization. My garage is full of them—one for tarps, one for bike gear, one for climbing gear, and on and on. When I take the family car camping everything gets separated into different bins. I thought the plastic box was the pinnacle of design from a storage perspective, but then I started seeing ads on social media for RUX, a collapsible storage box, and the Gear Box 5500, a burly, highly customizable storage box from Radius Outfitters. Suddenly, my cheap plastic bin didn’t seem so hot. Social media strikes again.

But are these over-engineered storage solutions actually better? Are they worth their $200 price tags? I harbored the same skepticism when Yeti introduced their first cooler. I went from laughing at people who dropped $300 on an “overpriced ice bucket” to owning several of their coolers myself. So, I spent a month testing out the RUX and Radius Outfitters Gear Box 5500, comparing them with the $14 Hefty Hi-Rise bin, which holds 68 liters of gear and is ubiquitous in garages and truck beds across America. Here’s what I discovered.

Yes, that’s a lot of money to drop on a storage box, but sometimes well-built gear is worth it. And the Gear Box 5500 is certainly a far cry from a $14 storage bin. It’s made from 1680D Cordura panels and nylon, with rigid poly corner stays. It’s a tough box that can withstand a beating (I’ve thrown it around my garage and let it ramble around the back of my truck and it’s no worse for wear), but what sets the Gear Box apart is the fact that the 55 liters of storage space can be carved up by a handful of dividers that Velcro into different configurations. And therein lies the genius of this box: a regular storage bin offers organization, but the Gear Box offers organization within organization. Think about your standard camping bin: ever opened it looking for your headlamp and had to dump everything out to find it? That’s what I thought.

I moved all of my camp kitchen gear into the Gear Box and immediately divided all the goods into separate sections. Everything gets its own space and I no longer have to sift through it looking for my chef knife or matches. In this respect, the Gear Box 5500 is an excellent solution solution for car camping. But I don’t go camping as much as I like, so I decided to use the Gear Box to store my gym climbing and mountain biking gear, which I need to access a couple of times a week. Typically, I keep all of this gear in a duffel bag in the back of my truck, but arranging the dividers gave me exactly enough space to hold my climbing shoes, harness, and chalk bag in one section, and my helmet, gloves, and miscellaneous bike gear in another—and still have room left over for extra layers, snack, and a water bottle. It holds everything I need to hit the climbing gym or local dirt jumps, right there, no searching or sifting through a duffel bag necessary.

The customizable dividers take organization to the next level. The construction is sound, too. There are even exterior pockets!

The Velcro dividers are difficult to put in place because the Velcro works too well. There’s a plastic slider you can use to help the process, but it’s still difficult. The box itself is also heavy and only has side grab handles, so you’re not going to carry this box a great distance. Because this box is loaded with Velcro and black felt, you’ll notice when it gets dirty—it’s a magnet for dog hair.

How Does It Compare to Hefty?

The Hefty is see-through, so you know what’s inside without opening the lid. It’s also lightweight, which is nice if you’re loading it with heavy gear. But it’s not as robust as the Gear Box 5500 and will crack if you treat it haphazardly. Also, because the Hefty Hi-Rise holds so much gear (68 liters) and has no internal organization, finding small items can be a pain.

RUX takes a completely different approach to storage than Radius Outfitters, constructing its 70-liter “box” from a flexible, waterproof TPU-coated 840D nylon with aluminum corner stays that operate like slap bracelets—they can be rigid, creating a stiff box, or they can fold so the box can store flat. The RUX is also loaded with handles and straps that allow you to carry the box as a shoulder tote, backpack, or standard box. Because of its light weight and multiple carrying configurations, the RUX occupies a middle ground between a storage box and a burly gear tote.

The RUX requires a set up that’s not very intuitive (I had to watch the video). But once I got it put together, I appreciated the design of the system, which ultimately allows you to customize the way you carry it whenever and wherever you need to.

When you compare the RUX to the Gear Box 5500, the lack of dividers is noticeable. Seventy liters is a lot of space, so the gear inside the RUX gets jumbled and mixed together—small items find their way to the bottom of the box just like in a standard plastic storage bin. But RUX shines when you’re hauling big pieces of gear, like ski boots and helmets. Ski gear is notoriously difficult to move from your car to the base lodge, especially if you’re carrying gear for kids. I typically stuff everything into an oversized duffel to slog across the tundra of the parking lot. But RUX can swallow these large items and still have room for extra layers, gloves,  and goggles. Plus, the multiple handle points mean you can carry it as a tote, a briefcase, or a backpack. I found the backpack mode to be the most useful; getting all that gear on my back means I have my hands free to help my kids with their stuff. The RUX is also an all-star at the beach: think wetsuits, bathing suits, towels, and footwear. All of your wet, sandy gear can go in here and be contained and then you can hose it out.

The collapsible aspect of the RUX is brilliant—I can store it on a shelf or in the trunk without taking up too much room, then expand it when I need it. The multiple carry options take it to the next level though—it’s comfortable enough to carry as a backpack or tote for relatively long distances. Extra points for the waterproof build, too.

The lid is difficult to put and keep on (there’s an elastic strap/rail system that I can’t get the hang of). This could be user error, but RUX includes two extra buckles that hold the lid in place, so I’m thinking the problem is more universal. The lack of interior organization wouldn’t have bothered me before I tested out the Gear Box 5500, but now it does.

How Does It Compare to Hefty?

Both the RUX and Hefty hold similar amounts of gear in similar ways: big cavernous space waiting to be filled. But the carry system and waterproof construction of the RUX puts it in a league of its own. This isn’t a storage bin, it’s a carry-all.

So, are these pricey new storage solutions worth the money? It depends on how you use them. It would be ridiculous to spend $200 on a fancy box to store your Christmas decorations. If you only need to keep ice cold for a few hours, you don’t need a Yeti, either. But different jobs require different tools. If there’s gear you use often that would benefit from extra organization, then the Radius Outfitters Gear Box 5500 might be worth it. Mine will house my climbing and biking gear and live in my truck moving forward, and I’ll switch all of my camp kitchen gear into it during car-camping trips. Likewise, the RUX will make ski and surf trips easier. But neither of these new options will replace the Hefty Hi-Rise in my garage. For that kind of organization, they’re overkill.

Out of doors Colorado explores the perfect of Lake Pueblo State...

Have a good time Hubbard Park With An Out of doors...

The Greatest Fleeces for Ladies