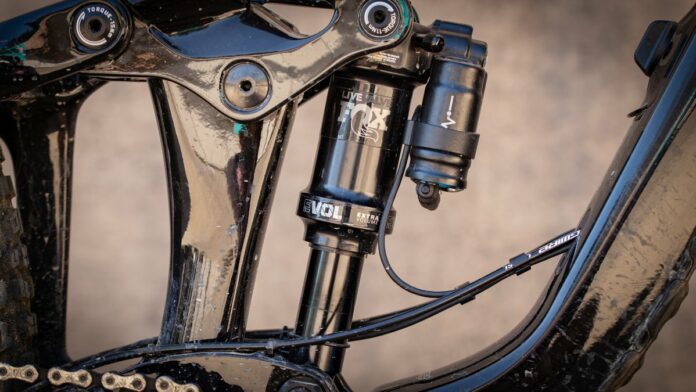 The Fox Live Valve was officially introduced to the mountain bike world in 2018, but the rumor mill around Fox developing an electronically controlled suspension system started churning years before then. Fox delayed the release of Live Valve for so long that by the time it landed, the buzz around it had already faded.

And Fox’s marketing strategy around it was noticeably subdued. If I had just pulled off making automatic robot future suspension, I’d be shouting it from the top of a mountain somewhere—or whatever the digital format of that is. Fox was sort of just whispering word about it like church-pew gossip, almost like they knew it wasn’t really ready. Either way, it’s noteworthy that Live Valve has been spec’d on just a handful of bikes since coming out.

How come, though? Bike builders have been trying since the birth of full suspension to balance the opposing forces coming from the rider and the ground, often with some very complex Rube Goldberg–looking contraptions. It’s a big reason bikes are so varied in look and design—people skin the suspension cat in lots of different ways. But skinning cats is hard work, so when a thing controlled by a microchip that’s capable of automatically adapting your suspension 1,000 times a second comes around, you’d figure every product manager would order it right up. But they didn’t.

Maybe because they didn’t want all the complexity that integrating the wired system added to frame design. Perhaps they were happy with how efficient their bike already was. Or maybe they didn’t want to add any additional weight. Maybe it wouldn’t add enough advantage, or worse yet, it’d take some away.

That was the case, in my opinion, with the Live Valve–equipped Giant Trance X, released in late 2020, along with a Pivot Mach 5.5 I tested the same year. The system just wasn’t fast enough and kept making decisions that opposed my own.

Even on a weak platform setting, I could feel the initial bump in my hands before the fork would start doing stuff. By the time the rear wheel got to a bump, the accelerometers did their job of telling the rear shock what was coming, and it would open up. But there was nothing to warn the fork of what was ahead, so a gazillion times per ride I’d feel a jolt through the bars before the fork could react. It just made me want to turn it off for descending, which of course defeated the purpose of electronic suspension altogether. If you need to make setting changes when going from climbing to descending, the robot suspension has already failed you. If you need to power the system completely off to make the suspension feel natural enough to descend with, there’s no functional difference between it and the normal suspension with lockouts you reach for.

But Fox is just getting started with all this stuff. Released in 2021, Live Valve 1.5 is already much easier to live with. Fox calling it version 1.5 instead of 2.0 suggests that this more of a tweak than a full redesign, but I can say right off the bat that it feels entirely new. After a month of riding the new system, I walked away thoroughly impressed, but was I convinced?

Fox basically retuned the system software to be locked out less of the time. It still defaults to locked, but it stays open for longer and goes into open mode on less steep terrain. The hardware has also been modified to provide a softer firm mode and smoother operation to help smooth out the transition between closed and open. It essentially comes down to Live Valve 1.5 actually working for trail riding the way it’s supposed to. You really can set it and forget it.

The system is now Bluetooth-enabled as well, allowing you to connect to an app to select from five different ride modes, ranging from locked out most of the time to fully open all the time. A unique climb mode keeps the rear suspension firm but the fork open, the reason being to maintain better traction on technical climbs and keep the front end lower on steep stuff. It’s an interesting take on a climb mode and sort of hints at what I think I’d like to see in the future, which would be to decouple the fork from the system altogether and run it with a Grip2 damper instead.

My feeling is that very few trail riders use fork lockouts to begin with, and trying to get the fork to react before the rider can feel the first impact is harder than it’s worth if nobody is asking for forks to be locked out in the first place. But I also understand the dream of making the front and rear ends complement each other. You never know if you’ll be able to make it work if you don’t try, right?

I wound up settling on sport mode for most rides, which basically keeps the bike a little firmer and more efficient than comfort mode, but not all the way to Strava KOM mode. I was really surprised at how much better the system performed in all conditions, especially on descents and through undulating terrain.

The annoying initial impact I could feel with the first version of Live Valve was all but gone this time around. The bike behaved much more naturally than it had on both my experiences with the previous version. The bike felt more efficient than when fully open, but whenever an impact came along, the suspension would open right up without any jolting initial impacts. Revolutionary, right?

Well, yes and no. Don’t get me wrong—it’s very cool technology that deserves to be developed. I’m personally excited for the future of electronic suspension.

But still, the bike was more supple and predictable descending in open mode. Essentially, it had better overall traction on descents in open mode than if I left it in sport mode. Just like in a car, maybe sometimes you want to shut off the computers and rip. Maybe I dig what the computer is doing most of the time, but every now and then I’d like a super-quick way to make it stop its calculations. If there were a little open bypass button on the bar that toggled between open and whatever efficiency mode you’ve selected, that would seem like a good solution to my remaining nitpicks about the system. As of now, you still need to get off the bike and crouch down to hit the button on the battery to make mode changes or take out your phone and do it—both options being more of a hassle than just flipping a manual lever. This interface needs to be made easier.

Also, there are bikes out there right now with such nicely tuned analog suspension that perform close to flawlessly without the need for electronics at all. They firm up while pedaling but are still ready and able to open right up for impacts. Considering Live Valve’s mess of wires, complex fitment requirements, and battery that requires charging, it would have to be a serious game-changing marvel to be worth it. And frankly, I don’t think it provides enough of an advantage to be a must-have piece of technology. Not yet, anyway.

But considering how much of a leap forward this version is from the original, the next update could blow the doors off.

And if Fox can manage to streamline the whole system some more and perhaps even take the fork out of the equation altogether for trail and enduro applications, there could be a bright future for Live Valve. Electronic suspension as a technology could completely change the way bikes are designed. What would bikes be like if engineers weren’t constrained by trying to strike the perfect balance between traction and pedaling performance? What if they could work on traction and outsource more of the pedaling performance to the shock itself? I’m not really jonesing to seek out and own a Live Valve–equipped bike today, but the future of this tech seems bright.

Designated tenting: These campgrounds round Colorado are value a reservation |...

Denver has competitors for Out of doors Retailer commerce present host...