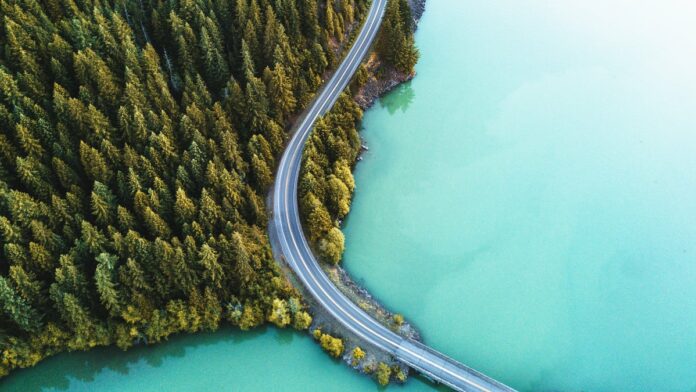 Along the Cascade Loop, you’ll see a little slice of all that makes Washington great: a series of mountain passes, rivers, and lakes that feel distinctly Pacific Northwestern. The roadway passes through the spiky summits of North Cascades National Park, past the fertile farmlands of the Skagit Valley and the apple orchards of Wenatchee, and along the shorelines of Lake Chelan. You’ll stop in charming small towns like the Bavarian-style Leavenworth and the Western-themed Winthrop. Yep, we’re claiming this as one the most beautiful road trips in the United States, and we’re not alone in that thinking: in January 2021, the Cascade Loop was designated as one of the country’s 34 National Scenic Byways.

You could drive the Cascade Loop in a weekend, but give yourself four or five days to truly experience it. The North Cascades Highway, or State Route 20, is closed in winter and reopens each spring, usually by late May. Plan on heading out between June and October, but check the Washington State Department of Transportation site for the latest information on opening dates. Driving an electric car? You’ll find plenty of charging stations along the way. Though you can drive the loop in either direction, go counterclockwise for the best views. Start in the town of Everett, 30 minutes north of Seattle, then make your way east on Highway 2 along the Skykomish River and over Stevens Pass. Here are some stops worth pulling off for.

Grab a coffee and a made-from-scratch buttermilk biscuit egg sandwich from Narrative Coffee in the waterfront city of Everett. Then put Snohomish—the Antique Capital of the Northwest—into your navigation system. If you’re into collecting or just browsing funky old stuff, pull over at the Antique Warehouse or the Remember When Antique Mall for relics from a bygone era. Afterward, stretch your legs at Wallace Falls State Park, where the 5.6-mile round-trip Woody Trail passes nine waterfalls, including the 265-foot Middle Falls.

The Stevens Pass Bike Park is slated to reopen this summer after a brief hiatus. This is Washington’s only lift-accessed mountain biking, with purpose-built singletrack and flow trails, jumps, tabletops, drops, berms, and a pump track. If you’re not a biker, there’s still plenty to do at Stevens Pass in summer, including hiking, scenic lift rides, and an 18-hole disc golf course.

Spend a night or two in the faux Bavaria that is Leavenworth. The budget-friendly hotel brand Loge opened a downtown outpost here in 2020, with gear and bike rentals, live music, free morning yoga, and an outdoor beer garden (from $109). This Alps-style town has ample places to drink beer, but we like the Yodelin for rice bowls and cocktails or Bushel and Bee Taproom for cider. The next morning, grab coffee and a breakfast burrito at Argonaut before heading to the 4.2-mile Icicle Gorge Trail, a well-loved hike in the Icicle Creek Valley.

Wenatchee feels worlds away from the mountain passes you’ve just driven over so far. This rolling, fertile farmland has heaps of you-pick apple farms and fruit stands during the late-summer and fall growing season. Stop by Pybus Public Market, which has shops, cafés, and tasting rooms in a former steel factory, and Stutzman Ranch for peaches or cherries. Right before you hit Lake Chelan, pull over at Lone Pine Fruit and Espresso, a roadside stand on the shores of the Columbia River that sells coffee and whatever produce is in season.

As the largest lake in the state and the third deepest in the United States, this natural wonder is 50 miles long and around 1,500 feet deep. Ditch your car and hop aboard the Lady of the Lake ferry to Stehekin, a roadless lakefront community accessible only via hiking or boating. Once you’re there, you can get strawberry-rhubarb pie and a log cabin to sleep in at the Stehekin Pastry Company (from $240), or stay at the 27-room North Cascades Lodge at Stehekin (from $249), located right at the ferry landing. From there, you’re in a prime location to paddleboard, kayak, or hike.

In winter, the 60-mile-long Methow Valley is known for its 200 kilometers of nordic ski trails. But in summer, they make for great hiking, mountain biking, and trail running. The town of Twisp is known for its arts and culture scene, thanks to its festivals, downtown art galleries, and maker’s markets. The Methow Valley Farmers’ Market, held in Twisp on Saturdays from April through October, sells locally grown produce and handcrafted goods. Don’t miss a visit to Blue Star Coffee Roasters and the Cinnamon Twisp Bakery, both in town.

The town of Winthrop, eight miles down State Route 20 from Twisp and still a part of the Methow Valley, feels like a place locked in time—the main street is designed to look like an 1850s Western town. Here, you can take old-timey photos, fly-fish for trout on the Methow River, or sleep in a covered wagon at the Winthrop KOA (from $142). For a comfier base camp, stay at one of six rustic Rolling Huts (from $135), design-forward tiny homes in the valley, or a guest room at the 18-room Inn at Mazama (from $150) in nearby Mazama. Make sure to fill up on gas there, because it’s up and over the remote North Cascades Highway next.

Take your time driving over this pass. It’s downright gorgeous. Pull over at the Diablo Lake Overlook for a view of the turquoise water located within North Cascades National Park. Hike the 7.6-mile Diablo Lake Trail, which is accessible from the highway, and you’ll cross over the lake on a high-strung suspension bridge. If you want to stay overnight in the park, there are a handful of campgrounds—check for availability at the drive-in Goodell Creek Campground (from $20). Alternatively, the North Cascades Environmental Learning Center, an educational field campus, has overnight accommodations (from $81) near the shores of Diablo Lake. Stop for pizza at the Eatery in Rockport’s Glacier Peak Resort, a winery that also has campsites.

End your road trip in the bountiful Skagit Valley, known for its springtime tulip festival. Stay at the Smith and Vallee Guest House (from $350), a three-bedroom rental in an old schoolhouse that’s connected to a contemporary art gallery in the village of Edison. The popular Tweets Café, in town, is worth the wait for its creative sandwiches. Need a souvenir? Stop into El Sage Designs, in the nearby town of Mount Vernon, for a sweatshirt designed by a local artist and printed on-site.

Library playing cards may be keys to unlock entry to Minnesota’s...

9 weekend issues to do round Colorado Springs and past: Manitou...